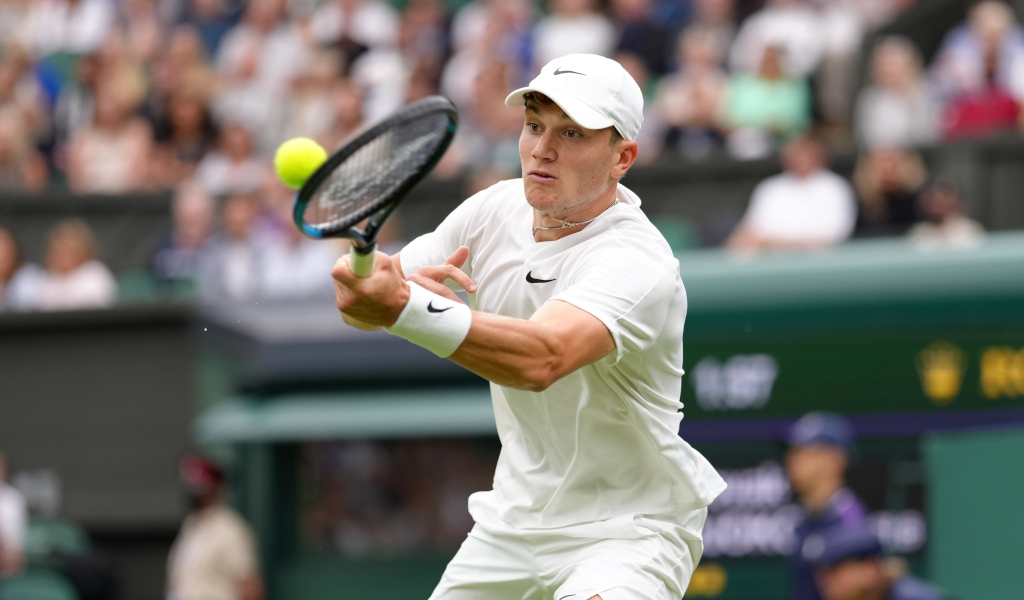 Jack Draper had Centre Court on its feet by taking a set off Novak Djokovic before the defending champion hit back to reach round two.

Nineteen-year-old Draper has long been marked out as a star of the future and he showed why on his Wimbledon debut, seizing his big moment and troubling Djokovic with his powerful game.

Draper was given a standing ovation by the 50 per cent capacity crowd when he clinched the first set, making him the first player to take a set off Djokovic in the first round at SW19 for 11 years, but the Serbian took control early in the second and ultimately eased to a 4-6, 6-1, 6-2, 6-2 victory.

Tickets were sold online this year rather than through the usual ballot and Centre Court certainly had a different, more vibrant atmosphere, which was amplified by the closed roof.

The day began with a standing ovation for the guests in the Royal Box who had contributed to Britain’s fight against the coronavirus pandemic, including Dame Sarah Gilbert, the architect of the Oxford AstraZeneca vaccine.

Djokovic had not played a singles match on grass since his dramatic five-set victory over Roger Federer in the 2019 final, while Draper announced his talent to the wider British public with his first two tour-level victories at Queen’s Club.

Djokovic took a while to find his feet back on the surface – literally, the world No 1 falling to the turf twice during the first set and shooting frustrated looks towards his box.

One of those tumbles came on a break point in Draper’s first service game and in the next game the young British hope capitalised with a break of serve of his own.

He saved seven break points in all to claim the first set, using his excellent backhand to match Djokovic from the baseline and finding his big serve when he needed it.

Start as you mean to go on…@DjokerNole’s pursuit of a third consecutive Wimbledon title is off to a winning start, beating Jack Draper 4-6, 6-1, 6-2, 6-2#Wimbledon pic.twitter.com/soTVGWBze4

But the Serbian, who has not lost at the All England Club since 2017, wasted no time in stamping his authority on the second set, racing into a 3-0 lead as he began to drag Draper around the court.

The teenager, playing just his fifth tour-level match, had his moments in the final three sets, but he struggled to make any impression on the Djokovic serve – the Serbian hit 24 aces in all – and the top seed, who is bidding to win a record-equalling 20th grand slam title, clinched victory after exactly two hours.

Draper was given another standing ovation when he walked off, and it seems certain he will be back on Centre Court sooner rather than later.