A closer look at the incredible career of Roger Federer 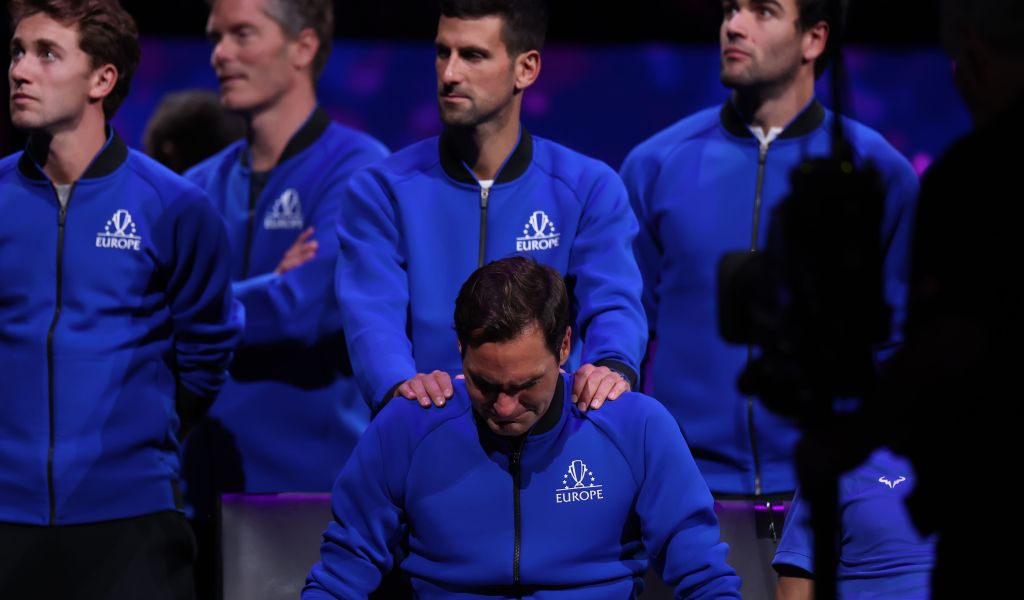 Federer and Nadal – with 42 grand slam titles between them – represented Team Europe in doubles at the Laver Cup, faced Jack Sock and Frances Tiafoe of Team World in what was an emotional occasion at London’s O2 Arena.

Here, we pick out some defining statistics behind Federer’s extraordinary singles career.

This consistency stemmed from his calmness on court, but the 20-time major champion once had a reputation for losing his temper and throwing his racket during matches, which led to some early ups and downs that persisted for far longer than any of his modern-day rivals.

Federer was hailed as the next tennis superstar after defeating Pete Sampras in the fourth round of Wimbledon 2001 – when the American was going for his fifth consecutive title – but he went on to lose in the quarter-finals to Tim Henman before crashing out in the first round the following year against the unseeded Mario Ancic.

By the time he reached his first major final in 2003, he had played 309 tour-level singles matches across five years.

That tally is by far the highest among those who have made it to five or more grand slam finals during Federer’s era.

Sampras had only 110 matches to his name before his first major final at the 1990 US Open, while Nadal had played just 127 before he won his first French Open in 2005.

Britain’s Andy Murray waited a long time before lifting a grand slam title at the US Open in 2012, but he had already established himself by reaching four finals beforehand, the first of which came immediately after his 200th match in 2008.

Federer would go on to dominate the sport after reaching – and winning – his first grand slam final in 2003.

The Swiss great won 15 of 25 majors between his Wimbledon successes in 2003 and 2009, breaking Sampras’ record for all-time grand slam wins in the space of just six years.

Sampras and fellow American Andre Agassi were ranked world numbers one and two for much of the 1990s and early 2000s, but Federer’s arrival – followed by Nadal and Novak Djokovic – brought an end to the dominance of US players.

Federer has played 30 Americans in his singles career and holds a winning record over all of them.

In total, he has won 105 of 118 singles matches against US players, with his win rate of 89 per cent higher than any nationality that he has faced more than 50 times.

Federer’s main US rival was Andy Roddick, who he played 24 times between 2001 and 2012. He won 21 of their meetings, including all four of their grand slam finals.

Thanks in part to Federer’s success, American men are currently on a 75-major drought that stretches back to Roddick’s US Open win in 2003.

Despite enjoying a period of individual dominance, Federer will be remembered as one of three all-time greats that defined a remarkable era.

Between them, Federer, Nadal and Djokovic have won 63 of 77 majors since Wimbledon 2003.

The Swiss was largely peerless in collecting his first 12 grand slam titles within four-and-a-half years, but defeat to Nadal in the 2008 Wimbledon final signalled a new phase in his career.

Federer would still go on to collect eight further major trophies, but they were spread out over a decade as he suffered a series of agonising defeats to Nadal, initially, and then Djokovic.

This is borne out by his performances in the latter stages of events.

Federer’s career appeared to be drawing to a close in 2016, when defeat to Milos Raonic in the Wimbledon semi-final preceded a six-month absence from the tour.

However, rumours of his demise proved to be premature as the Swiss made a glorious comeback in 2017.

Under the guidance of coach Ivan Ljubicic, the 35-year-old Federer won four matches against top-10 opponents – including three five-setters – to lift his 18th major trophy at the Australian Open.

In an interview with The Tennis Podcast this week, Ljubicic revealed how he encouraged Federer to be more aggressive with his backhand rather than slicing, in order to avoid being defensive in rallies.

The tactic paid dividends against Nadal, who he defeated in the final from a break down in the fifth set.

It was Federer’s first win in a major over his arch rival since Wimbledon 2007, and it triggered a run of five wins in his final six matches against Nadal.

Before working with Ljubicic, Federer had lost 23 of their 34 meetings.

Shortly after defending his Australian Open title in 2018, Federer returned to the top of the rankings at the age of 36 and became the oldest men’s number one in history.

He would make one further major final at Wimbledon, losing in heartbreaking fashion to Djokovic in 2019, before injuries plagued his final two years on tour.

Federer will not retire as the most successful male player in history, with Nadal and Djokovic both having surpassed his major tally of 20, but he will leave the game as its most popular son.

The Swiss appeared to enjoy the support of the crowd in many of his 1,526 singles matches, no matter where he was playing or who he was up against.

The ATP Fans’ Favourite award has been handed out at the end of each year since 2000, with Federer winning the vote for the past 19 years in a row.