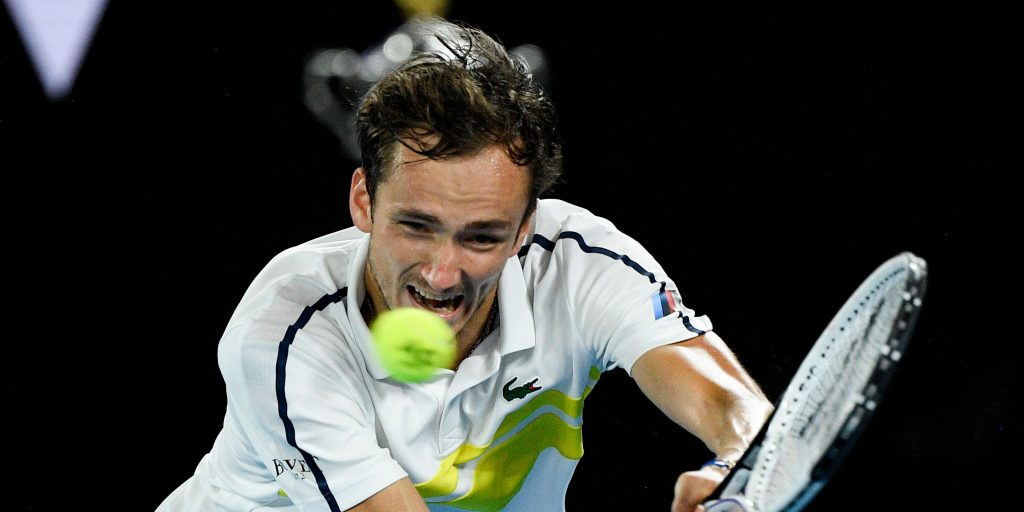 Daniil Medvedev will attempt to break a 16-year stranglehold when he takes on Novak Djokovic in the Australian Open final on Sunday.

A victory for Medvedev would not only bring the 25-year-old Russian a first Grand Slam title but also make him the first man outside of Djokovic, Rafael Nadal, Roger Federer or Andy Murray to be ranked in the top two since 2005.

That highlights the astonishing dominance of especially the first three, who have also won 14 of the last 15 Slam titles.

The exception was Dominic Thiem’s US Open triumph last year, which at last brought a first slam title for a man born in the 1990s, but Nadal did not play and Djokovic took himself out when he was disqualified for hitting a line judge with a ball.

Should Medvedev do what no man has yet managed in eight attempts and beat Djokovic in a final at Melbourne Park, it would be a real sign that the younger generation is finally ready to, if not take over just yet, at least compete on an equal footing.

Medvedev certainly could not be higher on confidence having won three titles in an unbeaten 20-match streak and claimed victory in each of his last 12 matches against top-10 players.

Two of those have come in his last two matches against Andrey Rublev and Stefanos Tsitsipas, while he has won three of his last four matches against Djokovic, including in straight sets at the ATP Finals last November.

Medvedev, who reached his first Slam final at the US Open in 2019, said: “In the last three months I managed to beat all of the top 10 without Roger. I managed to beat Novak in London – maybe he was not at his best, but still, it’s somewhere where he won four or five times, I think, and quite similar to here maybe.

It is a measure of Medvedev’s form and results that Djokovic is only rated a marginal favourite with bookmakers despite his incredible record in Melbourne.

Djokovic’s former coach Boris Becker told Eurosport: “If you asked Novak Djokovic who he would have preferred to play, Tsitsipas or Medvedev, he would probably have said Tsitsipas.

“Medvedev plays too unpredictable and also has this fantastic run. He’s the player of the moment, but he’s playing the eight-time Australian Open winner.

“The Australian Open is Novak Djokovic’s favourite tournament. He has won the tournament eight times. That also does something to the opponent. Novak is the favourite for me. But Medvedev is the most difficult opponent he can have in the final.”

Djokovic found himself two sets to one down to Thiem in the final last year before pulling himself out of danger.

He said of his Melbourne record: “Of course it contributes to more confidence. Knowing that I never lost in the finals or semi-finals just makes me feel more comfortable being on the court.”

Victory would earn Djokovic an 18th Slam title and pull him to within two of Federer and Nadal at the top of the all-time standings.

He clearly has huge respect for Medvedev, who has many of the same traits in terms of his defensive qualities and relentless consistency from the back of the court.

“He’s on a big winning streak,” said Djokovic. “He just has improved a lot. He has a big serve. For a tall guy, he moves extremely well.

“Forehand maybe was his weaker shot but he has improved that as well. Backhand is as good as it gets. He’s so solid. He doesn’t give you much. But he’s not afraid nowadays to attack and get to the net and take it to his opponents.

“I heard Jim Courier calling him a master chess player because of the way he tactically positions himself on the court, and it’s true. He’s definitely a very smart tennis player.”

Djokovic has spent more than four hours longer on court than Medvedev this fortnight and lost three more sets but declared himself back to full fitness following the abdominal injury he suffered in the third round against Taylor Fritz.

Medvedev said: “Against Fritz, I went to sleep. I actually thought he was going to lose because we saw he was in pain.

“He couldn’t fake it to lose two sets. (The) next matches were for sure not easy. I don’t expect anything easy in terms of his physical abilities on Sunday.”