Daniil Medvedev: ‘The pressure will be on Novak Djokovic in Australian Open final’ 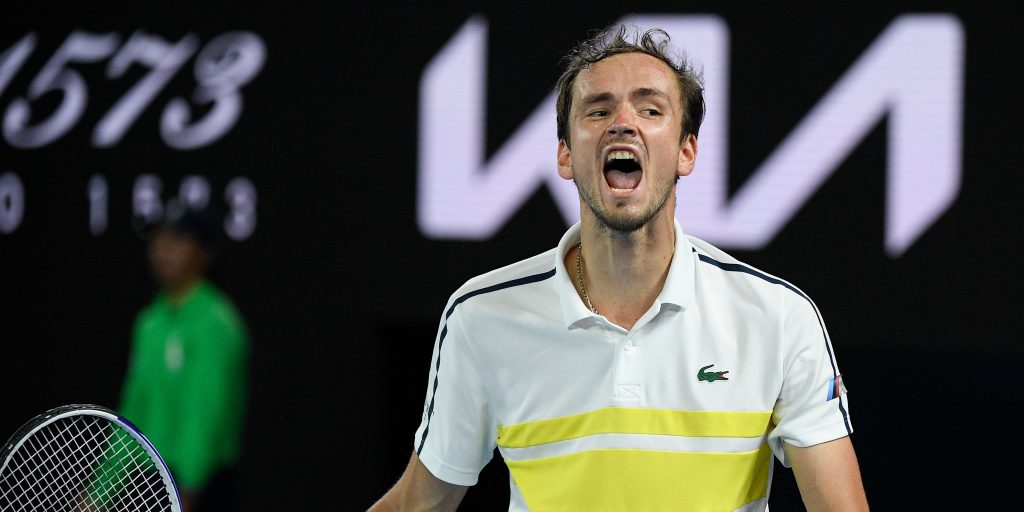 Novak Djokovic faces arguably his toughest challenge yet in keeping the next generation at bay, with in-form Daniil Medvedev standing in the way of his bid to win a ninth Australian Open title.

Medvedev, 25, extended his winning run to 20 matches with a 6-4, 6-2, 7-5 victory over Stefanos Tsitsipas at Melbourne Park to reach his second grand slam final.

That run has brought him titles at the Paris Masters, ATP Finals and ATP Cup, while Friday’s victory, which briefly became complicated in the third set before a stunning backhand pass turned things back in his favour, was his 12th in a row over top-10 opponents.

11 of them against players in the Top 10 in the @FedEx ATP Rankings.@DaniilMedwed is on F-I-R-E 🔥 #AusOpen pic.twitter.com/wY1uox6wNQ

Apart from Rafael Nadal at Roland Garros, beating Djokovic on Rod Laver Arena is the toughest challenge in men’s tennis. On the eight occasions the world No 1 has reached the last four in Melbourne, he has won the title.

The Serbian could enjoy a day off on Friday, having beaten Aslan Karatsev on Thursday, and he was keen to press home the message that the Grand Slams remain the domain of the big three, telling Eurosport: “There has been a lot of talk about the new generations coming and taking over from the three of us but realistically that isn’t happening still.

“With my respect to all the other guys, they still have a lot of work to do. I’m not going to stand here and hand it over to them. I am going to make them work their a**e off for it.”

They are getting closer, though. Dominic Thiem won his first Grand Slam title at the US Open but without having to beat Djokovic, Nadal or Roger Federer.

🇷🇺 Daniil Domination 🇷🇺@DaniilMedwed is into his first #AusOpen final.

Medvedev pushed Nadal to five sets in his first Slam final at the US Open in 2019 while Djokovic was in real trouble at two sets to one down against Thiem in Melbourne last year before coming back to win.

“I would say to win a slam, especially against somebody as Novak, is already a big motivation, and I don’t think there is anything that can make it bigger. I don’t take these words for sure as something negative.”

Medvedev’s unique mix of metronomic tennis and athleticism coupled with an intelligent, open and sometimes spiky personality makes him a compelling figure.

Djokovic described him as the man to beat and, while that is partly mind games, there is no doubt he would rather have seen a different opponent on the other side of the net on Sunday.

Medvedev has won three of their last four matches, including at the ATP Finals in November, and was keen to pile the pressure on Djokovic as the Serbian bids to win an 18th Grand Slam title to close the gap to two to Nadal and Federer.

Speaking on court, the Russian said: “I like that I don’t have a lot of pressure because he never lost in eight times that he was here in the final. It’s him that has all the pressure, getting to Roger, Rafa in the grand slams.

“I just hope that I’m going to get out there, show my best tennis. He has for sure more experience but more things to lose I think.”

Medvedev was completely in control for two-and-a-half sets against Tsitsipas, who was unable to find the same levels of energy or performance that he showed in his stunning fightback from two sets down to beat Nadal on Wednesday.

Melbourne’s large Greek community came out in force to support Tsitsipas and they finally had something to cheer when he saved two break points at 3-1 in the third set and then broke Medvedev for the first time.

The fourth seed, who usually relishes being the bad guy, admitted later that he allowed the crowd to get to him having got used to playing in empty stadiums but he recovered his composure in time to avoid a fourth set, sending a miraculous backhand down the line to break for 6-5 and then serving out the victory.

Medvedev waved his arms to the crowd after his backhand winner, and he said: “I wanted them to recognise me because the shot was unbelievable, I think one of my best shots in my career.”

This was Tsitsipas’ third slam semi-final and his third defeat, and he made no attempt to hide his disappointment.

“It’s a shame,” said the 22-year-old. “You come so close, you work so hard, and everyone is dreaming of a grand slam victory.

“I just need to find a way to get there and just be in the same state of mind. I’ve proven that I have the level to beat these players. So let’s hope for something better next time. I really hope it comes.”