‘It’s a tough one to swallow, but I felt something I never felt in my life in New York,’ says Novak Djokovic 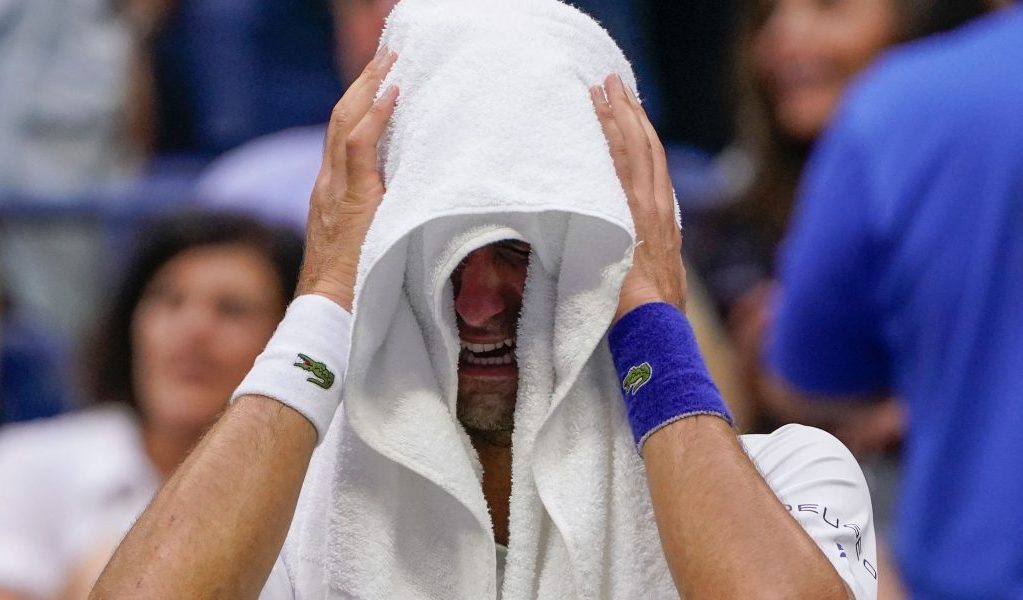 An emotional Novak Djokovic lost his chance at history but felt like a winner anyway thanks to the love of the US Open crowd.

Djokovic has surpassed his great rivals Roger Federer and Rafael Nadal in many aspects of the game but has been constantly reminded that, in terms of popularity, he occupies a distant third place.

In New York on Sunday, though, as he tried to become the first man ever to win a 21st Grand Slam title, and the first for more than 50 years to complete the Calendar Grand Slam, Djokovic was cheered to the rafters as he fought opponent Daniil Medvedev and himself.

After giving himself a glimmer of hope by pulling back to 5-4 in the third set, Djokovic sat on his chair and sobbed with sheer gratitude. A game later, Medvedev celebrated a 6-4, 6-4, 6-4 victory, and with it his first Grand Slam title.

Addressing the crowd through tears, Djokovic said: “I would like to say that tonight, even though I have not won the match, my heart is filled with joy and I’m the happiest man alive.”

At his press conference later the Serbian explained why it had meant so much to him.

He said: “Of course, part of me is very sad. It’s a tough one to swallow, this loss, considering everything that was on the line.

“But, on the other hand, I felt something I never felt in my life here in New York. The crowd made me (feel) very special. I did not expect anything, but the amount of support and energy and love I got from the crowd was something that I’ll remember forever.

“That’s the reason on the changeover I just teared up. The emotion, the energy was so strong. It’s as strong as winning 21 Grand Slams. They touched my heart, honestly.”

By winning the Australian Open, French Open and Wimbledon titles, Djokovic gave himself the chance to do what only Don Budge and Rod Laver have ever managed in the men’s game by claiming all four titles in the same year.

He had tried to keep his mind in the present, refusing to answer questions about his historic quest after his quarter-final victory over Matteo Berrettini, but it was clear through the fortnight that the pressure was weighing heavily. 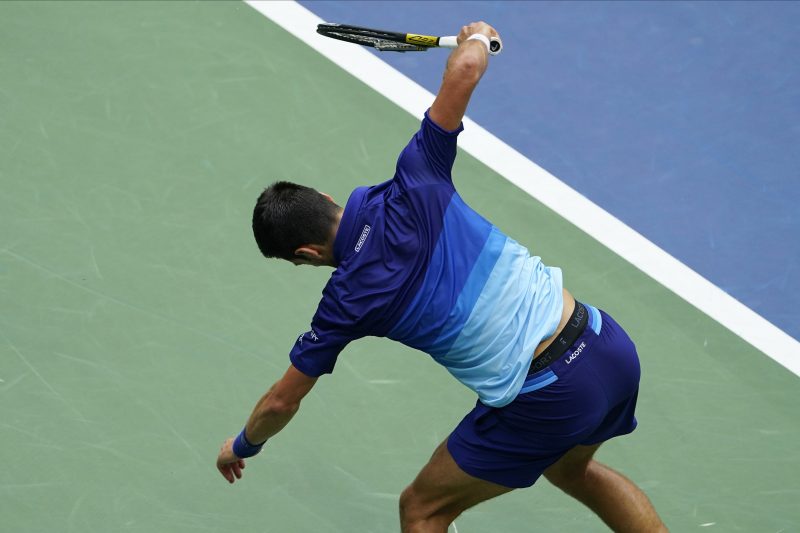 He dropped six sets on his way to the final and spent five and a half hours longer on court than Medvedev, who is nine years his junior, and the last hurdle proved simply beyond him.

Djokovic said: “I was just below par with my game. My legs were not there. I was trying. I did my best. I made a lot of unforced errors. I had no serve really.

“If you’re playing someone like Medvedev, who hits his spots so well, just aces, gets a lot of free points on his first serve, you’re constantly feeling pressure on your service games. It was just one of these days where unfortunately it wasn’t meant to be.

“It was a very demanding period for me in the last five, six months. Everything was coming together for me here and kind of accumulating all the emotions that I’ve been through.

“Unfortunately I didn’t make it in the final step. But, when you draw a line, you have to be very satisfied with the year. Three Slams and a final.

“And in tennis we learn very quickly how to turn the next page. Very soon there are some more challenges, more things that are coming up. I have learned to overcome these kind of tough losses in the finals of slams, the ones that hurt the most.

“I still love this sport and I still feel good on the court. As long as there is motivation and that flair, I’ll keep riding.” 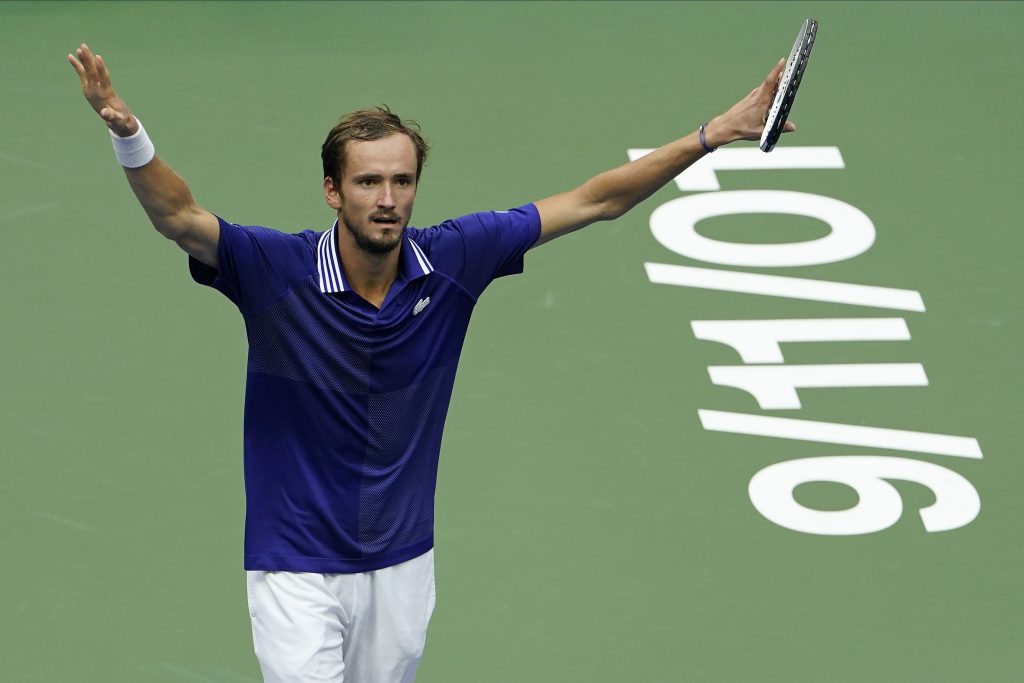 Tennis and Hollywood royalty was in attendance in Arthur Ashe Stadium in anticipation of watching history being made but the tension flowing through Djokovic’s body was all too clear as he dropped serve in the opening game and won just three points on Medvedev’s serve in the first set.

The crunch moments came early in the second. Djokovic had Medvedev at 0-40 in the second game but, unusually for a man who has a sixth sense for striking at moments of weakness, he could not take advantage.

After missing two break points in the fourth game, the frustration that had been building exploded out of the 34-year-old, who pounded his racket repeatedly on the court before dropping serve again.

Djokovic had trailed Stefanos Tsitsipas by two sets to love in the French Open final before turning things around but here he was quickly 4-0 down in the third.

Medvedev wobbled at the finish line, double-faulting twice in a row from match point at 5-2 after pausing for heckling from the crowd. He double-faulted again on his second chance two games later before Djokovic netted on the third opportunity.

Simply stunning Daniil Medvedev, you stopped one of the greatest tonight. To win your first Grand Slam title is always special, to do it against a champion like Novak Djokovic is something else. Take heart Novak, the quest continues. Best wishes, 🚀

Medvedev is just the second man born in the 1990s to win a Slam singles title after last year’s champion Dominic Thiem and only the third along with Andy Murray and Stan Wawrinka to beat one of the big three in a slam final since Juan Martin Del Potro defeated Federer in New York 12 years ago.

“I do feel sorry for Novak because I cannot imagine what he feels,” said Medvedev. 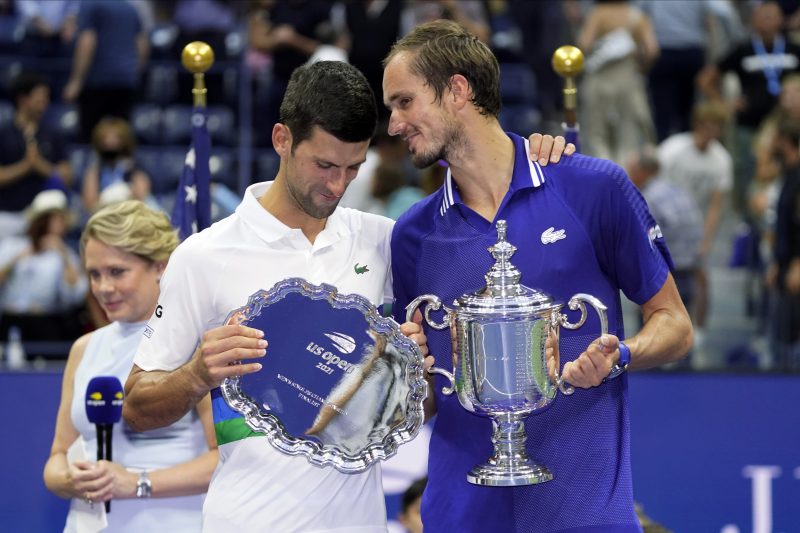 “For the confidence and for my future career, knowing that I beat somebody who was 27-0 in a year in grand slams, I lost to him in Australia, he was going for huge history, and knowing that I managed to stop him definitely makes it sweeter and brings me confidence for what is to come.”

The 25-year-old, who lost to Nadal in five sets in his first final in New York two years ago, was planning to fully soak in the moment, saying with a smile: “Russians know how to celebrate. Hopefully I will not get in the news.”

Djokovic, meanwhile, distilled his emotions at the end into one word. “Relief,” he said. “I was glad it was over.”