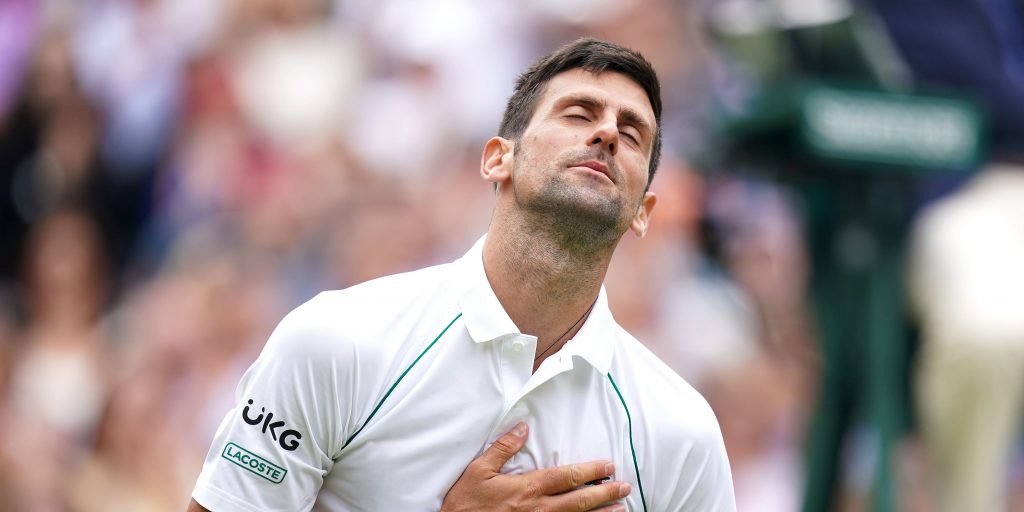 Novak Djokovic insisted he is not the bad guy as he moved a step closer to chasing down Roger Federer and Rafael Nadal.

The world number one eased into the semi-finals at Wimbledon with a 6-3, 6-4, 6-4 victory over Marton Fucsovics and is now just two wins from claiming a 20th grand slam title.

That would see Djokovic draw level with Federer and Nadal’s haul of majors, yet the 34-year-old does not seem to enjoy the widespread popularity of his two illustrious peers.

Certainly the Centre Court crowd were more on the side of underdog Fucsovics, the unseeded Hungarian playing in his first grand slam quarter-final.

However, Djokovic said: “I don’t consider myself a bad guy. I’m not chasing anybody.

“I’m making my own path and my own journey, my own history. I’m privileged to be part of the history of this sport that I love.

“I know about a lot of stats. I don’t know about all of them. But they do motivate me even more to play my best tennis at the events that count the most in our sport.”

It was not the most convincing display from the defending champion against Fucsovics but, as has been the case throughout these Championships so far, it did not really have to be.

Djokovic has still only dropped one set this fortnight, against Britain’s Jack Draper in the first round, and remains firmly on course to become only the fourth man to win three consecutive Wimbledon titles alongside Federer, Bjorn Borg and Pete Sampras.

Things looked ominous for Fucsovics when Djokovic raced into a 5-0 lead and brought up two set points inside the first 25 minutes.

But Fucsovics fended those off to finally get a game on the board and managed to break in the next, only the fourth time Djokovic had dropped serve in the entire tournament.

Fucsovics, the first Hungarian man to reach the last eight of a grand slam in 40 years, has a similar playing style to Djokovic and easily matches up with the Serbian on the fitness front.

Having surrendered the first set, the 29-year-old stayed with Djokovic until 4-4 in the second when one of too many forehand errors gave away a break point which the top seed devoured.

A backhand return winner brought Djokovic another break at the start of the third and he fended off four break points on the way to reaching a 10th Wimbledon semi-final, where he will meet Canadian 10th seed Denis Shapovalov.

“I’m sure that that’s going to be the biggest test I will have so far in the tournament, which is also expected. It’s semi-finals,” added Djokovic.

“I’m looking forward to it. It’s going to be a battle and I need to be at my best.”