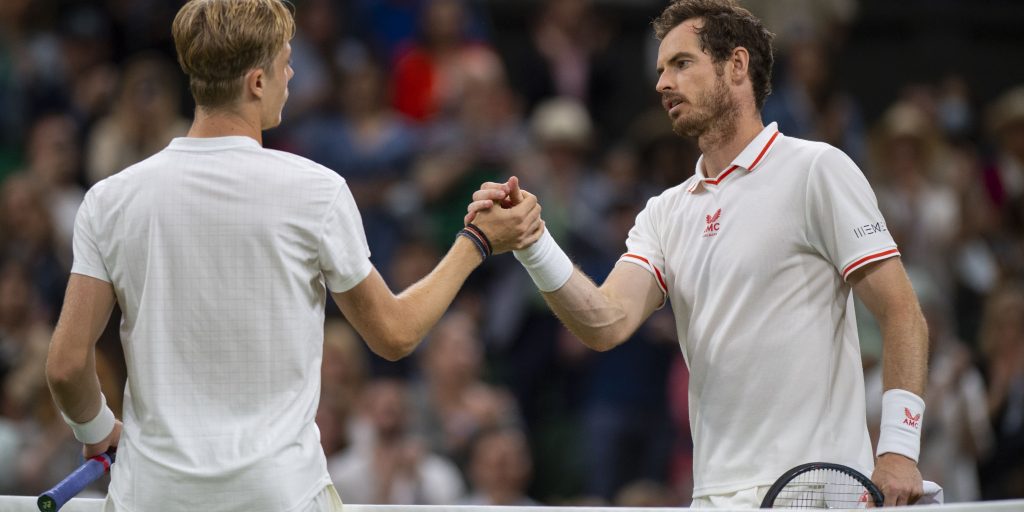 Denis Shapovalov ended Andy Murray’s latest Wimbledon adventure but paid tribute to the Scot, calling him an “inspiration” after he achieved a dream of his own.

The 10th seed had only claimed one victory at the All England Club during his three previous appearances but continued his best ever showing in SW19 with a 6-4, 6-2, 6-2 win over the two-time winner of the tournament.

In a match lasting two hours and 17 minutes, the 22-year-old was extremely impressive and hit 45 winners, 13 aces and broke Murray on six occasions to bring the comeback of the Briton to an end in the last-32 stage.

The Canadian proves a step too far for Andy Murray and moves on to the second week at The Championships 🇨🇦#Wimbledon pic.twitter.com/P93HEZSuwc

Speaking courtside, Shapovalov said: “This is a dream come true for me. I put countless years of hard work into every practice so that one day maybe I could play on Centre Court.

“And to play against a legend like Andy and a match like this. First of all huge shout outs to him because what he is doing, no-one has ever done.

“He is truly an inspiration to many people – including me. I am just trying to soak in everything before I leave. It is truly amazing to be out on this court and to play a match like today. I don’t think I can play any better.”

Murray, who is working his way back after a string of injuries following a metal plate being inserted into his hip joint, followed fellow home favourite Dan Evans in exiting Wimbledon.

Yet only after some trademark blows and with his younger rival sweating at times.

It was the third time he had been knocked out in the last-32 stage and his American opponent will face one of two Russians through to the fourth round next.

Korda will take on 25th seed Karen Khachanov, who offered up no break points in a 6-3 6-4 6-4 success over Frances Tiafoe, Stefanos Tsitsipas’ conqueror in round one.

The other Russian through was Andrey Rublev, the fifth seed, but he needed almost three hours to get the better of Fabio Fognini.

It extended the 23-year-old’s best ever run at the All England Club and he will do battle with a player fast turning into a nemesis.

Marton Fucsovics will take on Rublev after he knocked out ninth seed Diego Schwartzman following three hours and 19 minutes of action and it will be the fifth match between the pair during the last 12 months.

Not including a walkover given to the Russian at the Qatar Open in March, the pair have clashed at Roland Garros, Rotterdam, Dubai and Miami since the tour resumed following the coronavirus pandemic.

Defending champion Novak Djokovic was able to shake off his demotion to Court One with a 6-4, 6-3, 7-6 (7) victory over Denis Kudla.

The world number one will take on Chilean Cristian Garin, who beat Pedro Martinez in four sets to continue his fine Championships.

Meanwhile Shapovalov can expect another stern examination in the round of 16 where he will meet 2019 semi-finalist Roberto Bautista Agut, who again showed his pedigree on grass with a hard-fought victory over Dominik Koepfer by a 7-5, 6-1, 7-6 (7-4) score on Friday.