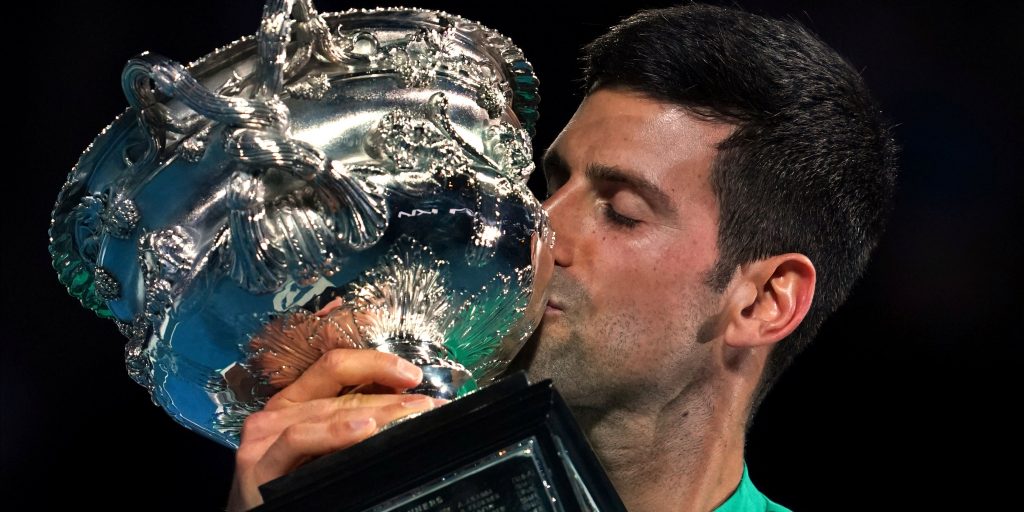 Novak Djokovic will adjust his schedule as he looks to overhaul Roger Federer and Rafael Nadal.

The Serbian maintained his position as the king of Melbourne with a ninth Australian Open title, courtesy of a 7-5, 6-2, 6-2 victory over Daniil Medvedev in Sunday’s final.

It was the 33-year-old’s 18th Grand Slam singles title, leaving him two behind the men’s record held jointly by Federer and Nadal.

“I’ve said it before, obviously majors, especially at this stage of my career, are the most important events, the tournaments where I want to peak and play my best tennis,” he told reporters in Melbourne on Monday.

“I feel age is just a number. I don’t feel tired or exhausted from playing tennis or from competing at the highest level.

“I know also realistically things are not the same as they were 10 years ago in terms of energy and biology and everything but I feel like I still have a lot of gas in me.

“I will have to be wiser and smarter with my scheduling in order to save and use and direct the energy into the tournaments that matter the most, and hopefully I’ll be able to win more majors.

“That’s something I’ll definitely look forward to as a priority.”

It is unclear when Djokovic will return to action. He revealed he had a second MRI scan on Monday on his abdominal tear, which had grown from 1.7cm when he first sustained it to 2.5cm.

“The damage is bigger than when I did it after the third round,” he said. “It’s not too bad judging by what the doctor said but I’ll have to take some time off for it to heal properly.”

The Australian Open was successfully staged during the coronavirus pandemic.

More than 1,000 players and support staff were flown to Australia on charter flights and quarantined for 14 days from mid-January, while the tournament went behind closed doors for five days after Victoria went into a lockdown to combat an outbreak of the UK strain of the disease.

Tournament director Craig Tiley believes he has unearthed a blueprint that other bodies can follow to organise major sports events.

“This was the first time since the start of the pandemic began that there was a sport and entertainment event that had crowds and had every top player bar a few that couldn’t make it,” Tiley said.

“I think it is a blueprint that works. It requires more resources and more time but that’s a commitment that you have to make.”

Tiley said Tennis Australia had to use up its entire cash reserves of A$80 million (£45m) and take out a loan to get them through to next year.