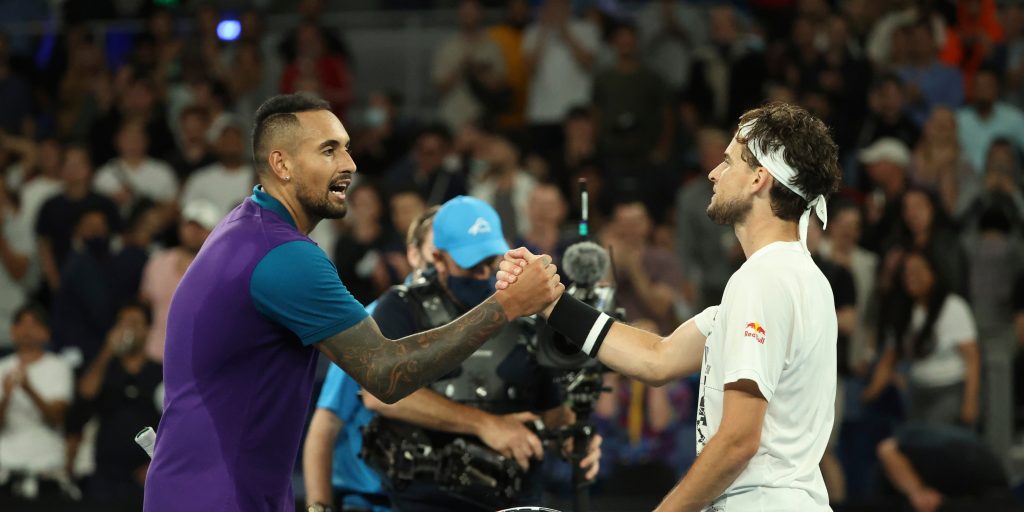 Dominic Thiem survived a command performance from Nick Kyrgios, coming back from two sets down to win an Australian Open epic.

Controversial Australian Kyrgios whipped the late-night crowd into a frenzy as he raced ahead but Thiem somehow held himself together to stage a remarkable comeback, winning 4-6, 4-6, 6-3, 6-4, 6-4.

Melbourne’s headline act went through his big hits early on, with a break of serve in the first game, an underarm serve and tweener through the legs in the second, and disputed a net cord in the third.

The single break was sufficient to take the first set, and Kyrgios brought the house down when he clinched the second with an underarm ace.

The scenes resembled the Last Night of the Proms, which was sadly ironic given the stands will fall silent as of Saturday under a new government lockdown.

However, the encore belonged to Thiem, who had come from two sets down to beat Alexander Zverev in last year’s US Open final.

The Austrian third seed, facing two break points at the start of the third set, reeled off an astonishing 28 unanswered points on his serve.

Break points were becoming scarcer on either side until Thiem edged ahead for 5-3 in the decider, and he served out with a swish of the backhand sealing a memorable victory.

“A match against Nick on his favourite court, there are easier things to do,” smiled Thiem on court afterwards.

“That’s one of the tougher challenges we have in our sport, you never know what’s coming.

“I was fighting myself in the match but after the US Open nothing’s impossible. That match showed me giving up is never an option.

“Giving up is never an option, there is always a chance”@ThiemDomi‘s spirit was never broken 💪🇦🇹#AusOpen | #AO2021 pic.twitter.com/I797JvA14S

“I always prefer playing in front of a crowd, even if they are not for me. They are obviously for the local hero, there’s nothing wrong with that.

“I prefer that to playing in an empty stadium. Tonight was epic and a good last match before lockdown.”

Including qualifying Karatsev has now played six matches at the tournament and dropped only one set.

And he showed nerves of steel as he closed out the match of his life with an ace down the middle.