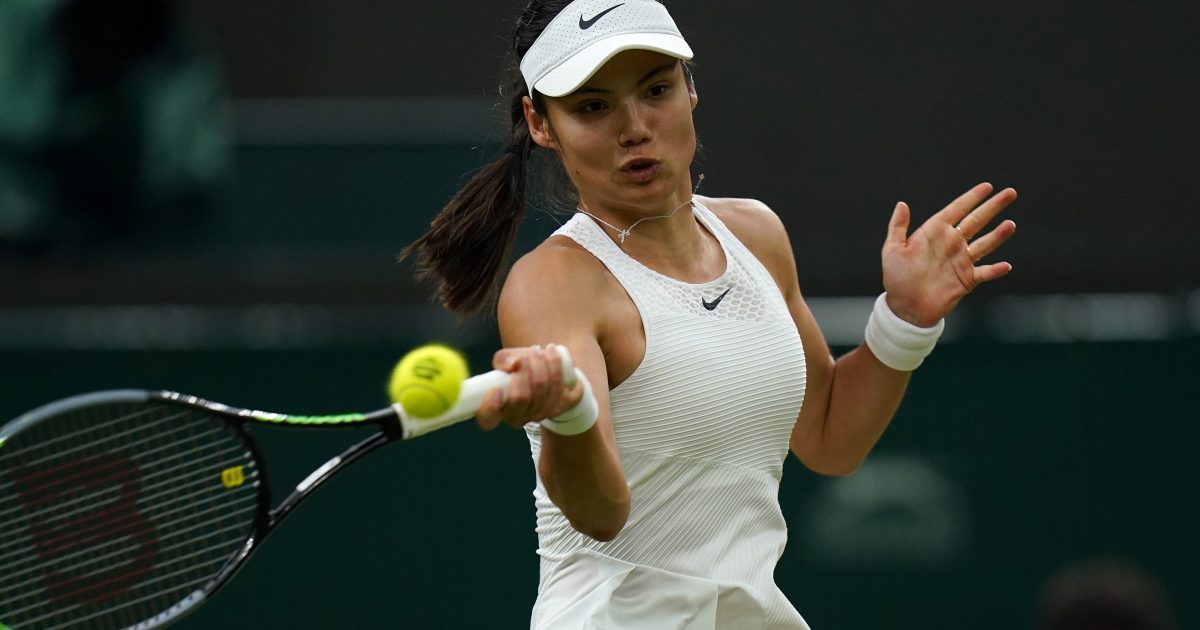 Emma Raducanu continues to relish her second taste of life at a Grand Slam without any pressure after she eased into the second round of the US Open with a straight-sets victory over Stefanie Vogele.

The teenager followed up her remarkable run to the last 16 at Wimbledon in July with another impressive display at a major to beat an opponent 13 years her senior by a 6-2, 6-3 score.

Raducanu hit 24 winners during her one hour and 18 minutes on Court 17 to continue her rapid rise, having only sat A-Level exams at the beginning of the summer.

Thanks for making me feel so welcome! Very very happy to be into r2! https://t.co/3fUR5noRHe

She said: “I feel like I am learning so much, being around these players and hitting with them, I feel like I am absorbing it all, so I don’t feel any pressure. It is all a free swing and bonus for me because I don’t have anything to lose.

“Still everything is so new to me and I just love New York, the buzz and everything. Walking around the city, it is such an amazing experience. I am just enjoying it and I want to stay here as long as possible so I will keep fighting.”

The Briton showed few nerves early on but had to recover from being broken in her second service game on her main draw debut at Flushing Meadows.

Yet it only seemed to spark the 18-year-old into life and she reeled off 12 of the next 13 points to clinch the opening set in 27 minutes, with one backhand winner in particular a highlight.

Raducanu continued to be dominate as temperatures hit 29 degrees and while she was again broken early into the second set, she regrouped and eventually sealed a spot in the last 64 at the seventh time of asking against an opponent who replaced 13th seed Jennifer Brady a day before the first-round tie.

“I was very up for my match against Brady, we were on the Louis Armstrong Stadium and I was looking forward to being on the big stage again,” the world number 150 insisted.

“At the last minute I heard I was playing Vogele, so I had to prep last minute but I was just focused on my game and what I could control. I felt I served very well which helped me settle into the match and I got some cheap points.

“I think it is obviously a difficult thing to serve out your first US Open main-draw win, so that lack of experience probably showed a bit at the end. My right arm was feeling a bit heavy but I was happy to get over line. Overall I thought I played a good match, with a high level.”

Next up for Briton’s newest star is a rematch with China’s Zhang Shuai, who beat the youngster 6-3 6-2 at the Silicon Valley Classic at the beginning of August.

That was Raducanu’s opening match of the hard-court season and also her first since Wimbledon, but the Toronto-born right-hander believes she will give her experienced rival a better contest on Thursday after improving during the ensuing weeks having come through three rounds of qualifying in New York.

“I have played four matches at the US Open and I’m feeling very comfortable here in the conditions, I feel I have acclimatised well due to the few weeks I have had in the States,” the Londoner added.

Teenage dreams are being realized in NYC.

All are into Round 2️⃣ of the #USOpen

“I don’t think you can compare any two tournaments because there are so many different variables but I’m enjoying my time here.”

Raducanu, who revealed she speaks Mandarin with her Chinese mother, said: “I know Zhang, we speak quite a lot in Mandarin whenever we see each other.

“We got on well and she is a great player. I played her in San Jose, it was my first game on the hard courts.

“I am going into it this time with the learning from our first one. Hopefully it can be a good rematch and I feel I have come quite far with my game since.”