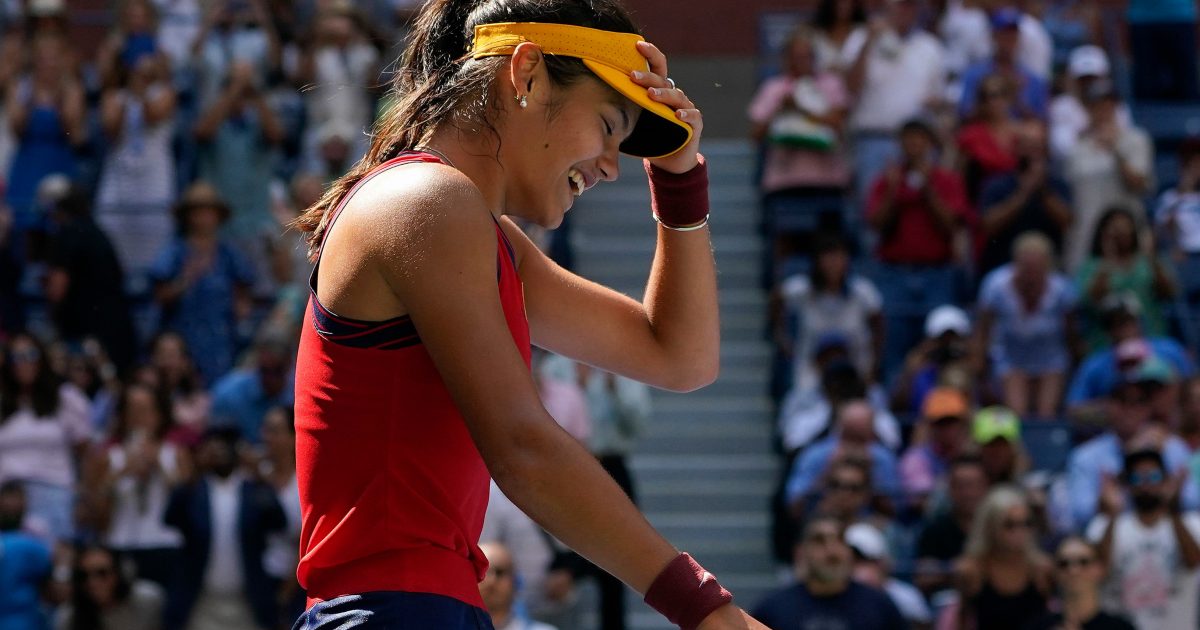 Emma Raducanu had a flight home booked before the US Open proper had even begun but the British teenager is now two victories away from one of the most extraordinary achievements in tennis history.

The 18-year-old defeated 11th seed Belinda Bencic 6-3 6-4 to reach the semi-finals, making it three qualifying victories and five in the main draw, all without dropping a set.

Raducanu is the first qualifier ever to reach the last four and, having passed her biggest test so far with a comfortable victory in her first career match against a top-20 player, she is a genuine contender for the title.

“I have just been focusing one day at a time, taking care of each day,” said Raducanu. “When you’re playing tournaments, you just get into this sort of auto-pilot mode of your routines, recovering on the day off in between.

“I didn’t expect to be here at all. I think my flights were booked at the end of qualifying, so it’s a nice problem to have.

“I’m just really enjoying the experience. Out there on the court today, I was saying to myself, ‘This could be the last time you play on Ashe, so might as well just go for it and enjoy everything’.”

The victory means Raducanu, who was ranked outside the top 350 in June, is projected to rise to at least 51 in the world on Monday, making her the British number one ahead of Johanna Konta and Heather Watson.

Anything further would carry her towards the very top echelons of the sport, but Raducanu vowed not to get distracted by thinking about the trophy, saying: “I don’t want to get ahead of myself at all.

“If I take care of what I can control, then that’s going to give me the best chance. It’s got me to this stage, and I’m not going to change anything.”

Raducanu did not face a top-100 player until her run to the fourth round of Wimbledon, and the highest-ranked opponent she had met prior to the clash with Bencic was 41st-ranked Sara Sorribes Tormo, who she beat for the loss of one game in the third round.

Bencic, the singles gold medallist in Tokyo earlier this summer, had made it through a significantly tougher draw than Raducanu also without losing a set and the 24-year-old Swiss made a strong start, winning the opening two games.

But, as she had against Shelby Rogers in the previous round, Raducanu quickly got a handle on the level she needed to play and, from 1-3 reeled off five consecutive games to take a hugely impressive opening set.

Her remarkable court coverage and ability to power the ball into the corners, particularly off her exceptional two-handed backhand, has flummoxed opponents all fortnight.

Bencic was unable to find the answers and Raducanu broke serve again to lead 3-2 in the second set, preserving her advantage all the way to the finish line to set up a last-four clash against either fourth seed Karolina Pliskova or Maria Sakkari.

“I’m so pleased to have come through that,” said Raducanu. “Belinda is such a great opponent and she’s an Olympic gold medallist, which is probably one of the biggest events in sport.

“I knew it was going to be an extremely difficult match. It took me some adjusting at the beginning to get used to her ball speed, how aggressive she was. Once I adjusted, I settled in, I didn’t over-press as much.

“I found a way to win, but it was very difficult to play against someone at such a high level.”

Covid-19 restrictions mean there will be no late dash to New York for Raducanu’s parents, who instead are watching back home in Kent.

This has been the tournament of teenage breakthroughs, and there could yet be an all teen final between Raducanu and Canada’s Leylah Fernandez, who turned 19 on Monday and was handing out cupcakes ahead of taking on Aryna Sabalenka in the last four.

“I have known Leylah since we were juniors, in under-12s,” said Raducanu. “I played her in Junior Wimbledon.

“The fact that we are both here in the semi-finals of the US Open after having played each other from the early days, it’s very cool to see just how far we have come.”

Bencic was frustrated by her performance, saying: “I knew that she plays very good. I just think I was struggling with myself a little bit today, with how I played, with what I could have done better. But obviously she’s very solid to just stay tough until the end.”