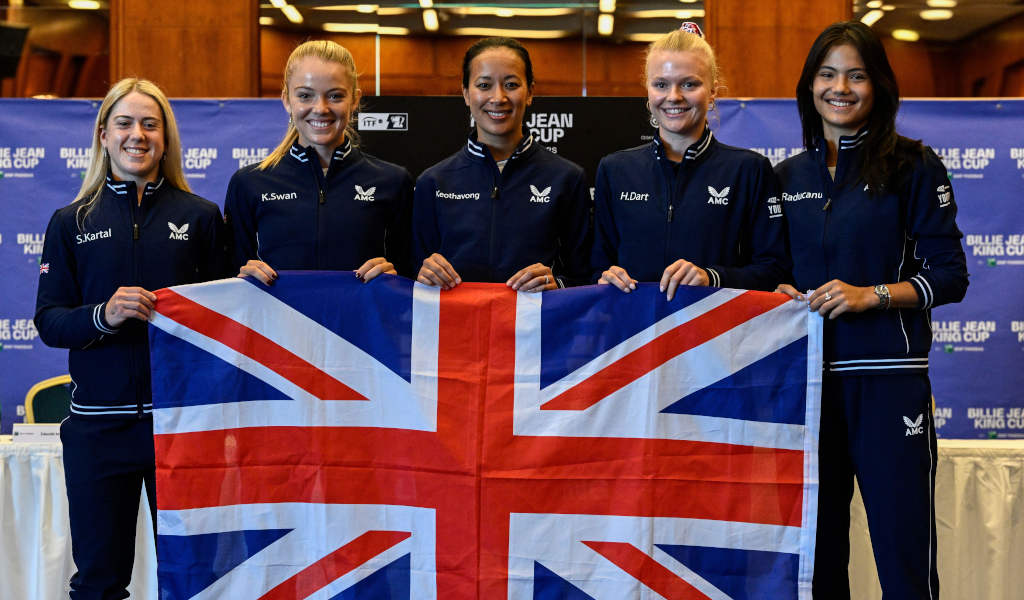 Emma Raducanu has already sacrificed her toenails in the Great Britain cause as she prepares for another new experience in Prague.

The US Open champion will lead her nation in the Billie Jean King Cup play-off against the Czech Republic over the next couple of days, with a place in the finals week later this year at stake.

The Czechs are missing a number of leading players but have a formidable record in the competition formerly known as Fed Cup while Raducanu will not just be making her senior Great Britain debut but also playing her first professional match on clay.

She spent a week on the surface in Italy prior to travelling to Prague and her feet are suffering from the sliding needed to thrive on clay but, whatever happens here, the 19-year-old is optimistic for the future.

Raducanu said: “This is going to be my first professional match on clay so I’m definitely learning. I feel this could be one of my strongest surfaces going forward but of course it’s early days right now.

“I feel like I have got a lot more potential physically. And I do enjoy sliding. So, after spending more time on this surface, I’m sure I’ll time it better and learn more about the surface but also just the time that the clay brings. I feel like I can really use it and and play aggressive.”

Already without French Open champion Barbora Krejcikova, Karolina Pliskova and Petra Kvitova, world doubles number one Katerina Siniakova – who won a marathon contest with Raducanu in Miami last month – was a late withdrawal for the Czechs through injury.

Raducanu will therefore take on 50th-ranked Tereza Martincova at the historic Cseky Lawn Tennis Club in the middle of the Vltava river on Friday after British number two Harriet Dart has opened the tie against Czech number one and former French Open finalist Marketa Vondrousova.

The reverse singles take place on Saturday and, if necessary, the tie will conclude with a deciding doubles rubber.

It has been a bumpy road for Raducanu since her stunning New York triumph and, amid problems with illness and injury, she has won only two matches so far this season.

Having a team around her to help share the burden of expectation will no doubt be a fillip for the teenager, who said: “I love playing as a team, especially the team we’ve got here.

“I feel like everyone has been a lot of fun and there’s been a great connection off court, whether that’s playing murder mystery games or cornhole, we’re definitely bonding and gelling very well.”

With Johanna Konta now retired and Heather Watson and Katie Boulter missing the tie, it is a very inexperienced British line-up.

Dart, who recently broke into the top 100 for the first time after reaching the fourth round in Indian Wells, made her singles debut at the same stage two years ago, losing two tight matches against Slovakia.

Katie Swan and 20-year-old debutante Sonay Kartal, who was Raducanu’s biggest rival as a junior, make up the quartet, while the Czechs can also call on Karolina Muchova, Marie Bouzkova and 16-year-old prodigy Linda Fruhvirtova.

Britain, who could yet make it into the finals week as hosts having made a bid to stage the event, certainly go into the tie as underdogs but captain Anne Keothavong backed Raducanu to rise to the occasion.

“It’s a new experience for her, another new experience, but one I’m sure she’ll take in her stride and embrace,” said Keothavong.

“These are exciting times, not just for Emma but for all of us here. We’ve got a tough challenge on our hands. Those who follow tennis will know the Czechs are one of the strongest nations, particularly in the women’s game, in the world and I think their record in this competition speaks for itself.

“So yes we’re going to be up against it but the team have prepared well, there’s good team spirit, and they’re ready to give it their best.”