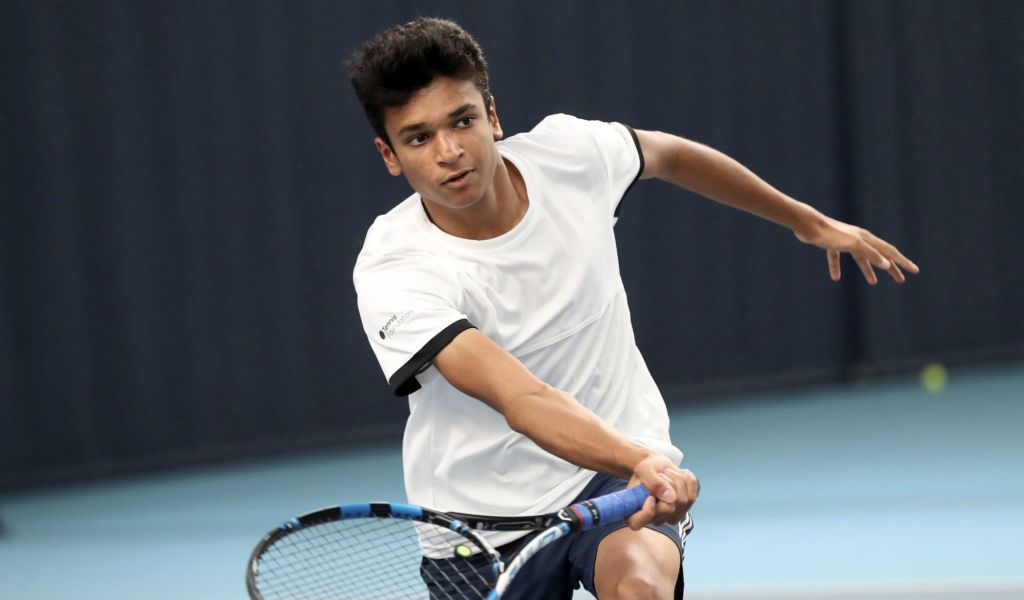 He is the leading deaf tennis player in Britain and now Eash Hayat is aiming for even more.

Cambridge University student Hayat won his fourth title at the National Deaf Tennis Championships at the LTA’s National Tennis Centre last November, yet his ambitions on the court will not stop there.

As Eash spoke to the LTA about his journey in the sport to mark Deaf Awareness week in the UK, it was clear that he is aiming for the stars:

Tell us how you started your journey in tennis?

It began with watching my older brother’s tennis lessons on Saturday mornings, while not having any interest in the sport myself. That carried on for a couple of years until a flick switched in my head and I just decided to join in. The coach thought I had potential and suggested I join in more often. From there, I went from 15 minutes of tennis a week, to an hour a week, and multiple lessons a week.

My lessons were at Westway Sports Centre, in West London, and my coach’s name was Andy Kemp. He coached me from the age of nine until around 17 and was extremely influential on my tennis career. Beyond having a thorough knowledge of the sport, he was also very deaf-aware, which made playing and learning about tennis much easier for me as a young child. Although I stopped being coached by him a few years ago (in order to play somewhere closer to home and focus on my studies), I still practice the tennis technique he taught me, so his advice is still influencing my game today.

How have you overcome the challenges of integrating into a hearing tennis environment?

Tennis is an individual sport, so I actually think it’s one of the best sports for deaf people to play, since the communication barriers many deaf people face aren’t as big an issue. That being said, there is still an element of communication with the opponent/officials/coaches that can be challenging. I always found it difficult to hear my coaches if they were on the other side of the court. The main way I overcame this was simply building the confidence to inform people around me (coaches and hitting partners) of my difficulty and ask that they make an extra effort to make sure I can hear them. Everyone I’ve met has always been happy to help, so I would advise that to any younger deaf players who may struggle with the same issue.

Explain the challenges you face in your efforts to reach your potential in the game.

Reaching my full potential in tennis is down to a variety of factors, both within and out of my control. I like to think of reaching potential as a matter of having the right mindset, before anything. Only I can control my attitude towards tennis, and so I always try to be as committed as I can to improving. I think that any player who has the right mindset is halfway there to reaching their potential, before considering any external factors.

What are your big ambitions in tennis?

I have many ambitions in tennis, including getting ATP points and playing on the professional circuit. I play for my university and tennis clubs and have specific goals year by year that I and the team work to achieve. In deaf tennis, I would like to get more medals, including doubles medals with the other GB team members, and to continue doing my country proud.

Tell us about your studies. Would you like to have more time to devote to your tennis?

I’m currently studying Natural Sciences at Cambridge University. It’s a challenging course that requires a lot of hours, but I do enjoy it a lot. It can eat into my tennis hours, but I do always try to make the most out of the hours I do get on court. While I’d love to spend all day playing tennis every day, I’m happy with the balance I’ve got between work and tennis, and I think it actually helps me get more out of each session too.

How do you feel tennis performs compared to other sports in terms of embracing competitors with sensory or physical disabilities?

Playing sports as a young deaf person can be a tricky experience, especially when it involves communication with other players/teammates. But as I mentioned earlier, tennis was always an easy sport for me to fit into as a deaf player, as communication was less crucial in the game, meaning my deafness was not an issue for me. I was also lucky enough to always be surrounded by people who were both deaf-aware, and very accepting of my situation. I was never made to feel like less of a player in anyone’s eyes, and I do think that positive attitude extends to the tennis community in the UK. I think that if more deaf people were aware of how easy it is to get started in tennis, and how their deafness won’t hinder them in this sport, the participation rates would increase quickly – it’s just a matter of spreading the word.

Describe your best moment on a tennis court so far?

I’ve luckily had a few moments I can look back on proudly, but I think the one I’ll always remember was winning match point in the finals of the Boys World Deaf Tennis Championships in 2015, and being too stunned to celebrate properly in front of everyone.

You have played at Wimbledon, so tell us about that experience.

I’ve had the chance to play at Wimbledon twice in my career so far. The first was as part of the 14&U Road to Wimbledon tournament. It was a great experience for me to have at that age, and an opportunity to meet more players both from the UK, and other countries. I then played there again recently, in a fixture of Oxbridge vs All England club. It was great to be back and to get the full Wimbledon experience.