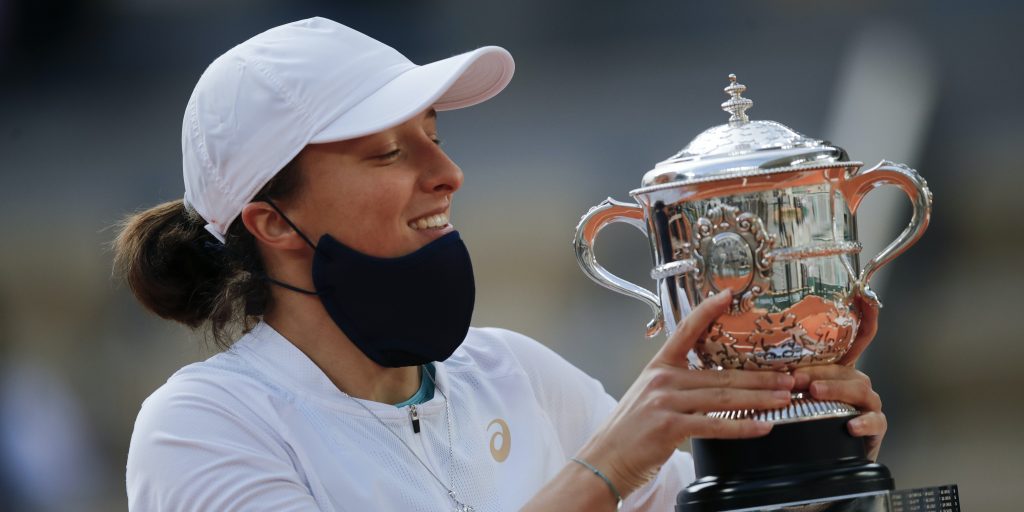 Iga Swiatek is ready to embrace her new-found stardom after becoming Poland’s first singles Grand Slam champion with a sensational run at the French Open.

The rock and roll fan has blasted her way through the draw and swept to the trophy without dropping a set, her 6-4, 6-1 victory over Australian Open champion Sofia Kenin in the final the icing on the cake.

When her last whipped forehand flew past Kenin, Swiatek put her hand over her mouth in sheer disbelief before heading off to celebrate with her support team in the stands.

The only time she appeared flustered was during her on-court interview, the 19-year-old saying: “I don’t know what’s going on. It’s overwhelming for me. It’s crazy.”

At 54 in the world, Swiatek is the lowest-ranked woman ever to win the French Open and the youngest winner since Monica Seles in 1992.

Her success has been celebrated widely back home, while former greats of the game have been falling over themselves to predict a glowing future.

Swiatek is the latest young woman to win a slam title – seven of the last eight have been claimed by players aged 23 or under – and most have found the subsequent rise in pressure and expectation hard to deal with.

The teenager said: “I’m just proud of myself. I’ve done a great job the past two weeks. I wasn’t expecting to win this trophy. It’s obviously amazing for me. It’s a life-changing experience.

“I need to come back home first, see what’s going on in Poland. I know it’s going to be crazy. I think I’m going to get used to that, it’s not going to be a problem for me. I didn’t have problem with getting attention, with people surrounding me.

“I really appreciate all the support I got during the whole two weeks. Even though I wasn’t on my phone and I wasn’t answering every person, I know that the whole country was behind me and they all believed in me.”

Swiatek’s results this fortnight made hype inevitable, not least her dismantling of top seed Simona Halep in the fourth round for the loss of just three games – indeed, she only lost 28 games in seven matches.

She handled it with the nonchalance of youth and there were no signs of nerves as she began the match by winning three games in a row, her heavy forehand and intelligent placement causing immediate problems for Kenin.

It was a strange situation for the young American who, despite being a grand slam champion, is still inexperienced at this level herself.

Unlike Swiatek, she had had to battle to make it to the title decider, losing four sets along the way, and that proved to be costly.

Swiatek, who travels with a psychologist, showed her mental strength by winning three tight games to claim the first set and had just recovered from a break down at the start of the second when Kenin headed off court for a medical timeout.

She returned with more strapping applied to her already-well bandaged left thigh but that did not disrupt Swiatek’s momentum and it was clear that Kenin was struggling, the 21-year-old winning just three more points in four games.

The American said: “She obviously played a really good match. She’s really hot right now, playing some really great tennis. I’m not going to use this as an excuse, but my leg obviously was not the best. It’s obviously disappointing.”

@iga_swiatek ooooh , what an amazing effort ! Loved watching you play and be fearless .💪🏻 Congrats on your first !

Swiatek, the Wimbledon junior champion two years ago, cited keeping her expectations low as the reason she was able to handle her first slam final with such aplomb.

She said: “It was so crazy for me winning against Simona (Halep) that I already thought about the tournament as my lifetime achievement. Really, I had no expectations.

“I knew it was going to be tough in the final. I didn’t want to stress a lot about it, so I just told myself that I don’t care and I tried to believe in that. I think at the end, I really just enjoyed the moment.

“It’s not that I don’t care if I’m going to win or lose, I’m just not thinking about it all the time. I’m focusing on the things I do right now because winning is just an effect of my work that I’m doing every minute.”