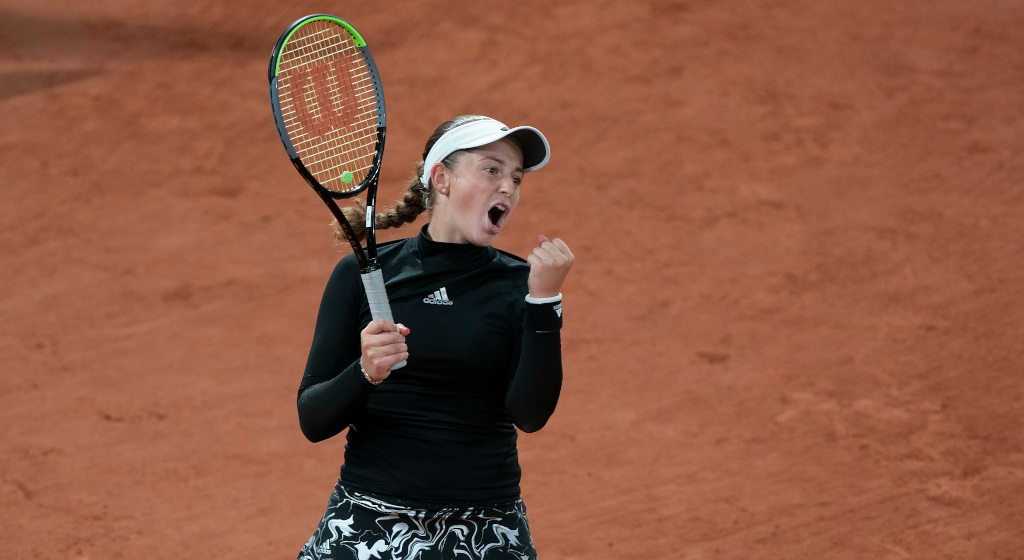 We look back at day five of the French Open as former champion Jelena Ostapenko knocked out second seed Karolina Pliskova to get Roland Garros talking about a possible title challenge again.

There is no doubt about Novak Djokovic’s credentials and he raced past Ricardas Berankis, while Stefanos Tsitsipas had a much more comfortable afternoon than in his first-round match.

Denis Shapovalov is out after a five-hour battle with Roberto Carballes Baena but Sofia Kenin, Garbine Muguruza and Petra Kvitova are all through.

Deciding if I can give these balls to my dog to chew 😅 Pumped to get my first win at the French Open👊🏼🇬🇧🍏 #UptheApples pic.twitter.com/4Z5Colb2hc

Grigor Dimitrov’s hardest opponent on Thursday was his own trousers.

Last year’s junior champion Leylah Fernandez is making waves already in the senior game and is through to the third round at Roland Garros. She revealed her tactical awareness is partly down to studying football with her coach father Jorge.

The 18-year-old said: “He would always make me see the openings, not only follow the ball or follow the player who has the ball, but see the open spots, see the other players, how they’re moving. I guess that kind of transferred in tennis, too.”

Dominic Thiem and Rafael Nadal bookend the day on Court Philippe Chatrier on Friday as the third round gets under way.

On the women’s side, top seed Simona Halep faces Amanda Anisimova, who she lost to at Roland Garros last year, while Elina Svitolina and Kiki Bertens are the other top seeds in action.