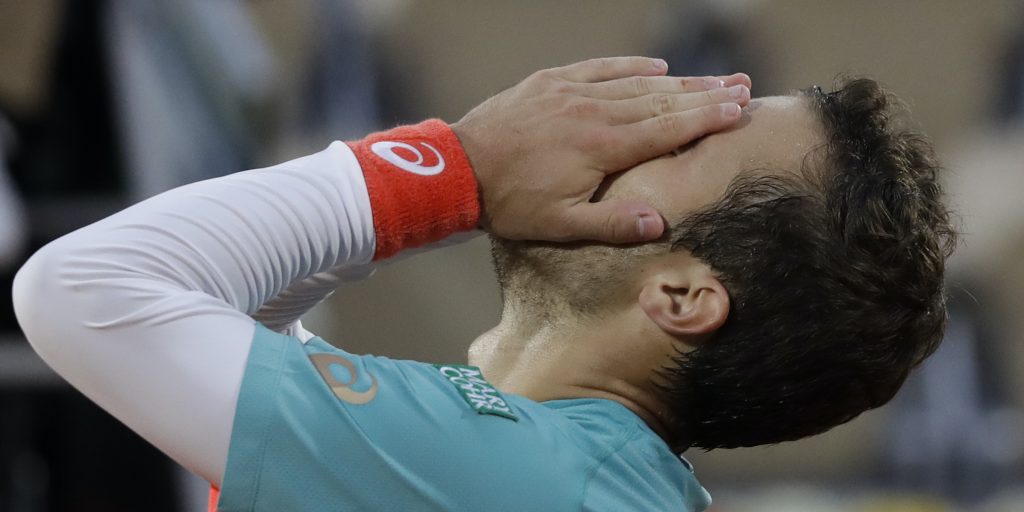 Rafael Nadal and Dominic Thiem continued their smooth progress through the draw at Roland Garros but the day belonged to 20-year-old Frenchman Hugo Gaston.

Wawrinka had been tipped as a potential title challenger in the slow, heavy conditions but he was simply unable to hit through the brilliant defence of Gaston, who looked stunned by his own achievement.

The £170,000 in prize money that the Frenchman has secured by reaching the fourth round is more than he has earned in the rest of his career put together.

Gaston said: “It’s difficult to explain. It’s fantastic. It was a great match. I’m very happy today. Before I was always watching this on TV. Today I can play on these courts, so it’s amazing for me.”

Gaston is the lowest-ranked man to reach the fourth round at Roland Garros for 18 years but not the only player outside the top 200.

🇺🇸 Sebastian Korda is into Round 4 at a major, matching the feat that his father Petr accomplished 10x. pic.twitter.com/1C0CFMOCpS

Korda is the son of former Grand Slam champion Petr Korda and his reward is a clash with his childhood idol Nadal.

“He’s one of the reasons I play tennis,” said Korda. “Just watching him play, unbelievable competitor. Just from him I have the never-give-up mentality. Whenever I’m on court, I try to be like him.

“Growing up, I named my cat Rafa after him. That says a lot about how much I love the guy.”

When informed of the other Rafa, Nadal, who breezed past Stefano Travaglia 6-1, 6-4, 6-0, said with a smile: “That means that I have been on the TV for such a long time, that’s the main thing. Another negative thing that means is that I am 34.

“But I’m happy to hear that. I know he’s playing great. He’s a very young kid with a lot of power. I think he has an amazing future – hopefully not yet.”

Gaston will take on third seed Thiem, who rated his victory over Casper Ruud as one of his best performances of the season.

The US Open champion has yet to drop a set at Roland Garros and recovered from a slow start to beat in-form Norwegian Ruud 6-4, 6-3, 6-1.

Italy are a growing powerhouse in the men’s game and they have two men through to the fourth round – Lorenzo Sonego and exciting 19-year-old Jannik Sinner.