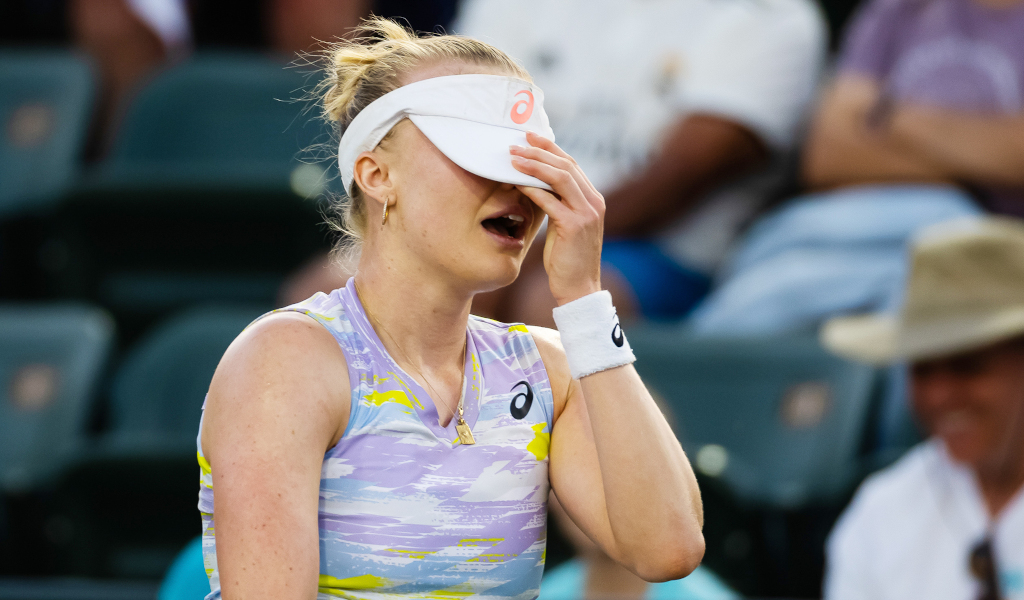 Harriet Dart served up a hat-trick of wins at the Rothesay International Eastbourne on Wednesday and revealed a spaghetti marinara was the secret to her success.

The world number 103 started the day by finishing off her second-round match with 10th seed Jil Teichmann and clinched a tight decider on Court Four to triumph 7-6 (7) 4-6 6-3.

After a tiny amount of rest, the home favourite was back in action and on Court Two where she got the better of Ukraine’s Marta Kostyuk 6-4 2-6 6-4.

It made her the first British player to make the last eight of the Devonshire Park event in five years and she concluded a busy day by teaming up with Heather Watson, who made the semi-finals in the singles here back in 2017, to defeat American duo Desirae Krawczyk and Shelby Rogers 7-5 6-4.

While the first and third matches of the day only needed to be completed after being suspended due to poor light in previous evenings, Dart spent more than three hours on the court.

Her reward after a treble of victories? A trip to her lucky Italian restaurant.

“I am just glad to be leaving this place before dark, so that is definitely a real positive,” the British number two admitted.

🇬🇧 @harriet_dart records her BEST ever result on the Hologic WTA Tour with a 6-4, 2-6, 6-4 win over Kostyuk!#RothesayInternational pic.twitter.com/EbkRHSoiez

” Just, it sounds really silly, but I do everything pretty much the same. So, I will just be getting food from Pomodoro’s, which is a great Italian restaurant that I am sure you all know about. Having the same thing. I know it’s boring but it works.”

Dart’s success will move her into the top 100 and ensured there was home representation in the women’s event after Katie Boulter and Jodie Burrage saw their fine runs come to an end.

The 25-year-old reeled off five consecutive games to clinch the opener but the former world number two upped her level after and even two stoppages due to medical emergencies in the crowd failed to knock the Czech off her stride who triumphed in two hours and 23 minutes.

Burrage, fresh from a career-best scalp over Paula Badosa on Tuesday, could not keep up with the in-form Beatriz Haddad Maia in the third match on Centre Court.

Haddad Maia was able to break the home player in the fourth service game and showed why she had won events in Nottingham and Birmingham during the last fortnight.

World number 169 Burrage was next able to get on the board in the third game of the second set and despite some excellent backhand winners, suffered a 6-1 6-2 loss in just over an hour.

Camila Giorgi claimed a fine 7-5 6-3 victory over fifth seed and ex-Wimbledon champion Garbine Muguruza in the last 16 and defending champion Jelena Ostapenko stayed on course to retain her WTA 500 title after opponent Madison Keys was forced to retire.

In the men’s side of the draw, Cameron Norrie eased past Brandon Nakashima 6-4 6-2 earlier in the day for his first win on grass this summer while British prospect Jack Draper stunned world number 15 Diego Schwartzman.

Norrie had suffered a shock early exit at Queen’s Club last week but produced an accomplished display against his American opponent, who he broke on three separate occasions.

An all-British quarter-final meeting between the world number 12 and Dan Evans was denied after the latter lost 7-6 (2) 6-4 to Maxime Cressy.

Draper delivered a memorable Centre Court victory after a hard-fought 7-5 7-6 (3) win over Schwartzman.

In a back and forth last-16 encounter that lasted two hours and four minutes, British number four Draper outlasted the Argentinian and showed his patience in the big points with six aces helping his cause.

Next up for Draper in the last eight could be a second meeting of the summer with Ryan Peniston, who saw his match with Pedro Martinez suspended at 7-6 (8) 3-6 3-2 just beyond 8.30pm in Eastbourne.

“All the Brits I have got a really good relationship with Cam, Dan, Andy (Murray) and Ryan as well. We train together on a daily basis,” Draper insisted.

“I think that is one thing where British tennis is changing. We want to push each other to get to the top 100 and I am very happy for Ryan.

“He is having an amazing few weeks. I hope I play him tomorrow. Three Brits in the quarters would be a good effort.”