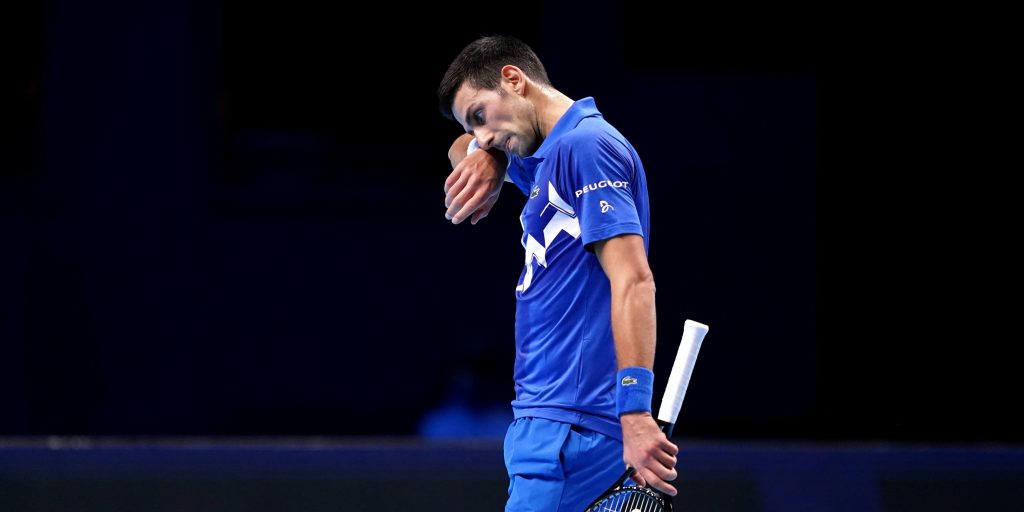 Novak Djokovic faces a must-win clash with Alexander Zverev at the Nitto ATP Finals after admitting he struggled physically during a heavy defeat against Daniil Medvedev.

World number one Djokovic arrived in London as the heavy favourite to win a record-equalling sixth title but was out of sorts in his second group match at The O2, losing seven games in a row in a 6-3 6-3 loss.

That is not to take away from how well Medvedev played, the Russian achieving the rare feat of nullifying Djokovic’s game with the excellence of his movement and the precision of his shots.

Having not lost a match in 2020 apart from his disqualification at the US Open until October, Djokovic has now been beaten in three of his last six outings.

He said: “I had a pretty bad seven games in a row that I lost from 3-2 up. In no time it was 6-3, 3-0 to him. I cannot allow these things to happen when you’re playing one of the top players of the world. He was just better, no question about it.

“We started well both of us, up to 3-3 it was quite an even match but just a very long game at 3-3, a couple of game points I haven’t capitalised on. After that break he was cruising, I made some unforced errors, I dropped the level of the game and the fitness, I struggled to find the right rhythm for 15 minutes.

“He used it and then he held his serve all the way to the end. He’s serving tremendously well, moving great. Just not a great match from my side, I thought I could have and should have done better, but credit to him for playing at a high level.”

🎾 Medvedev wins the group
🎾 Schwartzman is eliminated from contention
🎾 The winner of Djokovic v Zverev will advance to the semi-finals.#NittoATPFinals pic.twitter.com/vg6TC6aPO8

Medvedev did not win a match on his debut 12 months ago but has booked his spot in the semi-finals this time with one match to spare.

The 24-year-old, who arrived in London on the back of winning the Paris Masters title, said: “Of course I’m really happy because after last year you’re 0-3 so you always have doubts in your head like maybe it’s going to be like last year.

“Well it’s not the case. I’ve finished number one in the group already, which is great. It was not the best match from him.

The World No.1 is stunned!@DaniilMedwed dominates Novak Djokovic to progress through to the semi-finals 👏#NittoATPFinals pic.twitter.com/rq4a6uduZE

“Everybody has bad days. I don’t know what happened. Maybe he was just not feeling confident enough. It’s very tough to beat the big three on any day. You have to stay solid and that’s what I did.”

Earlier, Zverev battled to a 6-3 4-6 6-3 victory over debutant Diego Schwartzman, whose hopes of reaching the last four are now over.

Schwartzman was staring at a second convincing loss after Monday’s defeat by Djokovic when he trailed 3-1 in the second set and faced points for a double break.

But he fought back to win five out of the next six games and take the match to a decider. It was Zverev who stepped up when it mattered but the 2018 champion will surely need to play at a consistently higher level to have a chance of beating Djokovic.

Zverev has not cut a happy figure on court this week but he rejected the idea that allegations of physical abuse by an ex-girlfriend, which he strongly denies, are making it hard to focus on tennis.

Asked how he was dealing with the negative attention, he said: “The same way I’ve been dealing with it the last few weeks. Nothing’s changing, I think I’ve said enough about that. I’m here to play tennis. I did my job today and I’ve got to do it again on Friday.”