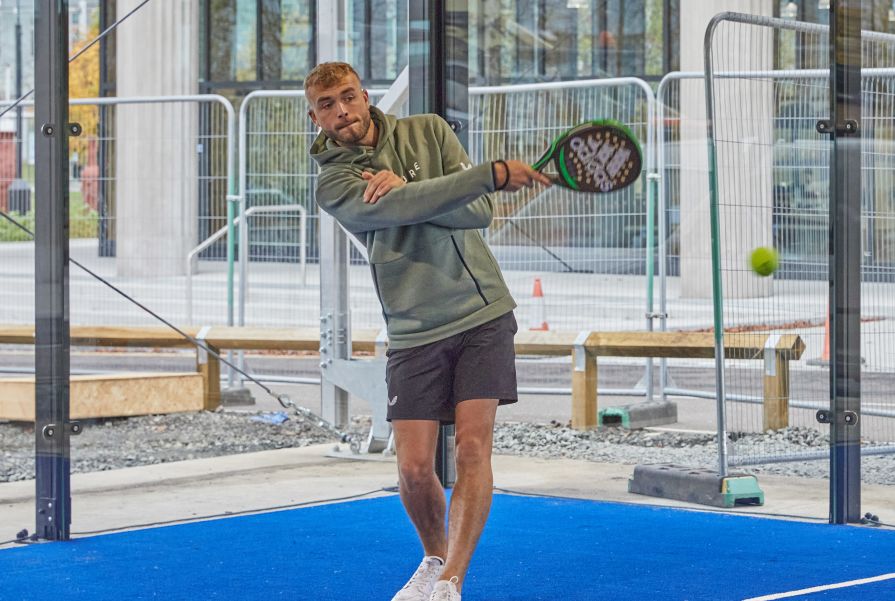 It was a battle of Hearts vs Hibernian as padel came to Edinburgh with the opening of two new courts at Edinburgh Park by Game4Padel.

Footballers Craig Halkett (Hearts) and Ryan Porteous (Hibs) tried out padel as they took their rivalries into a new sporting arena before the pair sat down with Tennis365 for an exclusive interview.

Padel is reported to be the world’s fastest-growing sport and was recently described as the biggest fitness trend of the Summer by GQ magazine and by The Times as the ‘racket sport that’s rapidly becoming a big hit’.

The game originally started in Mexico and quickly swept through South America and then into Europe. Spain is reckoned to have over 20,000 padel courts, and an estimated six million active players – it is now the country’s second biggest participation sport after football.

Padel is played in 91 countries and is the fastest-growing sport in many countries such as Sweden and Italy, with footballers Ryan Porteous (Hibernian) and Craig Halkett (Hearts) enjoying the experience.

“I want to get my mates down here for a game and you could see that things could get competitive really quickly.

“I have played on holiday a couple of times and it doesn’t take long before you are having good rallies. That’s why I say it’s a bit easier to play than tennis.”

Halkett was new to padel and believes the sport can build on the momentum behind it in the UK.

“It was my first time playing and I found it easy to pick up,” he told us. “Once you start getting into it, you want to keep playing, so it was really enjoyable.

“I definitely think it’s something football clubs will want to look at because it’s a great game to play with a few of your friends and it’s good fun.”

Game4Padel ambassador Annabel Croft also gave us her views on the sport, with the former British No 1 tennis player relishing the chance to get on court in Edinburgh.

“They say it’s the fastest growing sport in the UK and it has real momentum behind it,” Croft told Tennis365.

“A lot of people in my friendship group are asking me about padel now and that shows there is interest, so the main issue is the lack of courts. We need to get more out there.

“We had a young girl here in Edinburgh who had never played tennis or padel before and she told me afterward that she loved it. She got every single serve in the box, we had some rallies and she loved it.

“I have seen that a lot with friends. When I play with my husband and another couple, it would be hard to play tennis and have a fun game, but I can do that in padel.

“Also, I always say I have a great laugh when I play padel. It’s a really jolly game, you have a lot of fun rallies.”

Game4Padel, the UK’s leading provider of padel courts, is bringing this rapidly growing sport to Westfield London for a three-day event that will showcase just why it is becoming so popular all around the world.

An exhibition padel court will be built in the Central Atrium at Westfield London, from 5-7 November, giving visitors the chance to try out this new game, as well as featuring celebrity Pro-Am matches, coaching sessions, exhibitions and much more.

Stars who will feature on the court include Andy and Jamie Murray, Andrew Castle, and Annabel Croft, as well as special guests to be unveiled on the day.