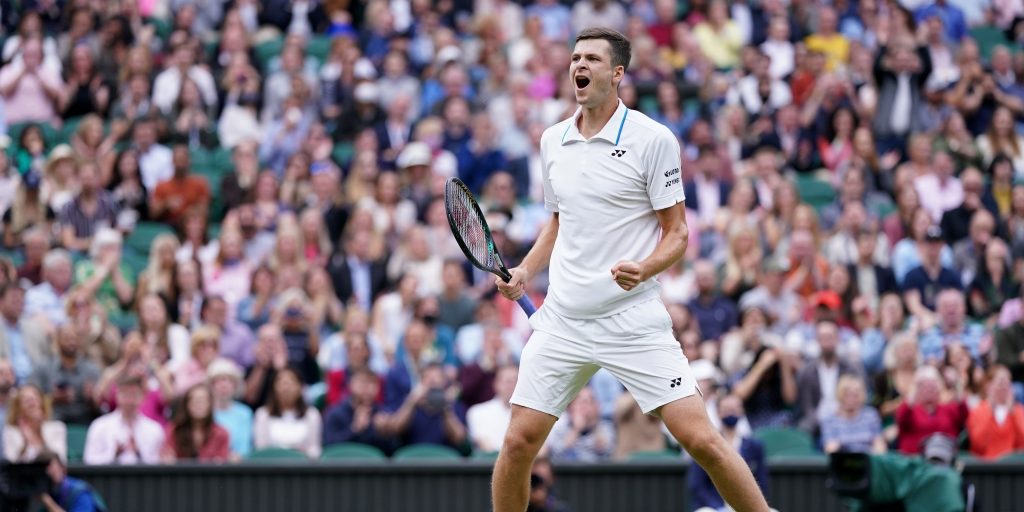 Hubert Hurkacz admitted Roger Federer inspired him to take up tennis after he stunned second seed Daniil Medvedev to book a Wimbledon quarter-final against his hero.

The match was the only one in the singles draw to become a casualty of the weather on ‘Manic Monday’, having started on Court Two, and they resumed under the roof on Centre Court with Medvedev 2-1 up and on serve at 3-4 in the fourth.

Three breaks of serve later and Hurkacz, the 14th seed, had reached his first Grand Slam quarter-final and a meeting with his boyhood idol.

Hubert Hurkacz to beat Roger Federer in five sets? Place a bet on the action with Planet Sport Bet.

“Obviously Roger is a special player,” said Hurkacz. “I mean, what he’s achieved throughout his whole career, it’s unbelievable. Then the way he plays is also special.

“Being out there playing quarter-finals against him, it’s really amazing. But obviously I’m out there to play my best and give myself the best chance of winning the match.

“He was a big inspiration for me. I mean, the success that he had, the way he played, how he plays in the important moment, it’s really special.”

Hurkacz hopes that returning to complete the match on Tuesday, rather than having a day’s rest, could actually be to his advantage.

“I think playing today might have helped me because I got used to the indoor conditions, the conditions on the big court, how the ball bounces there, all the crowd. I think that actually can help me in my next-round match,” he said.

“I mean, like, playing on such a big arena, obviously from the outside court the ball bounces a little bit different. I mean, just being out there, it’s so special.

“I’m just enjoying it a lot. I need to be prepared tactically. I’ll speak to my coach and we’ll be as ready as we can for tomorrow.”

Medvedev insisted the rain interruption was not to blame for his defeat.

He revealed he was asked by the match referee whether he was happy to resume on Tuesday afternoon, rather than play to a finish after Federer’s match against Lorenzo Sonego on Centre, and said yes.

“We knew it was going to be raining, so we knew we’re not going to finish yesterday,” he added. “I played really bad today. There’s not much more to say.”

There was a slim chance Medvedev could have finished the Championships as world No 1 had he lifted the title and Novak Djokovic not reached the final, so a fourth-round exit was hugely disappointing.

He said: “When you’re second in the world, fourth round is a really bad result. It’s a bad result. That’s it.”