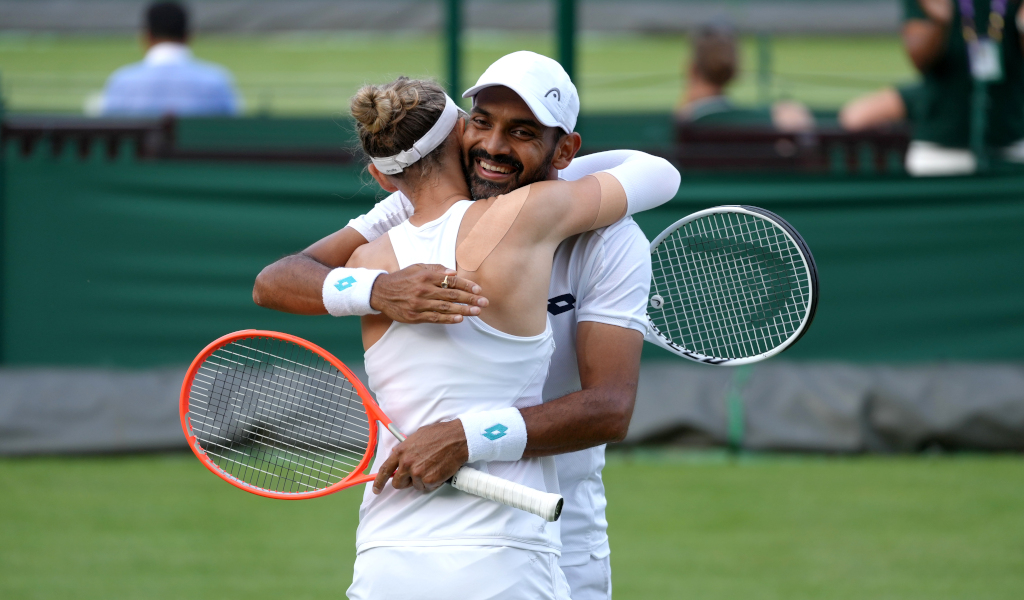 Husband and wife Divij Sharan and Samantha Murray Sharan showed they do not only have chemistry off the court as they claimed a first-round win in the mixed doubles at Wimbledon and revealed afterwards it had been seven years in the making.

The pair tied the knot in the summer of 2019 and fast forward two years, they achieved couple goals by not only playing together at the All England Club, but by triumphing 6-3, 5-7, 6-4 against Ariel Behar and Galina Voskoboeva.

While following in the footsteps of Leslie and Kitty Godfree – the only married couple to ever win the mixed doubles at Wimbledon – from 95 years ago is not too high on the agenda, the opportunity to walk out at Court Four in SW19 proved a memorable occasion for the duo.

“It was obviously really special for me to share that moment with Sam,” Indian doubles specialist Sharan admitted.

“I think it is my first win at a Grand Slam in mixed as well and it is Sam’s first win which makes it even more special.”

John Peers and Zhang Shuai’s withdrawal meant the long-term pair were able to enter Wimbledon as alternates and it ensured a seven-year long dream was achieved.

A chance meeting at a tournament in 2012, where both their doubles partners were familiar, was the catalyst for the two professionals to hit it off before they became official the following year.

Briton Murray Sharan added: “2014 we signed up but we didn’t get in. In the meantime Div was just playing with a few different partners because I wasn’t high enough to have a reasonable chance to get in, so it has been a long time coming to be able to play together.”

Delhi-born Sharan admitted a crossing of paths with the British player “was meant to be” and it seemed the case with being able to play at these Championships together too.

And after being presented with an unexpected chance at Wimbledon, they grasped it with both hands even if a 25-minute delay occurred in their match when a ball girl suffered a serious injury after slipping.

By the time she had left on a stretcher, the married couple were already one set to the good and while opponents Behar and Voskoboeva levelled, there was no denying a fairy-tale end to the match.

“I think we got lucky this year. The cut-off was not as strong and quite a few teams pulled out,” the 35-year-old Sharan said.

“And Wimbledon is an exception where you have a bigger draw for mixed doubles. It is a 48-mixed draw whereas most other slams it is 32 and I think French Open did it as 16 this year.

“We will have to go through the rankings to be able to play mixed doubles in the slams more so we will try to make the most of these two days and just see when we get the chance to play again.”

By playing at the All England Club after getting married, Sharan and Murray Sharan have followed a path trodden by Keith and Winnie Wooldridge and Andre and Debbie Jarrett.

When your argument isn’t resolved before practice 😉😂

It did not take long for the married duo to know their roles, with Murray Sharan, who lost in the first round of the singles and women’s doubles this week, impressive from the back of the court and husband Sharan dominant at the net.

“We practise together sometimes and especially in the last year we have practised a lot,” Murray Sharan revealed in reference to lockdown.

The coronavirus pandemic meant they were “sort of stuck together” according to Sharan which raised a laugh from his wife during their post-match press conference.

He added: “For other tennis players it was not possible to play with other people so we had the chance to help each other out in lockdown.

“We were training together, doing volleys in the back garden so it was good to get us through that period. We have known each other for so long and that did make a difference to our match. The understanding was there.”

Friday’s victory means the husband and wife team will be back in action on Saturday to take on 10th seeds Darija Jurak and Raven Klaasen.

A warm embrace was shared after their Court Four win and another chapter could be written into their story if further triumphs are achieved over the next week.

But do not expect much chatter during matches. Murray Sharan said: “Neither of us are particularly outgoing so we’re still not sure how we managed to speak to each other in 2012. One of us managed to pluck up the courage so it worked out well.”