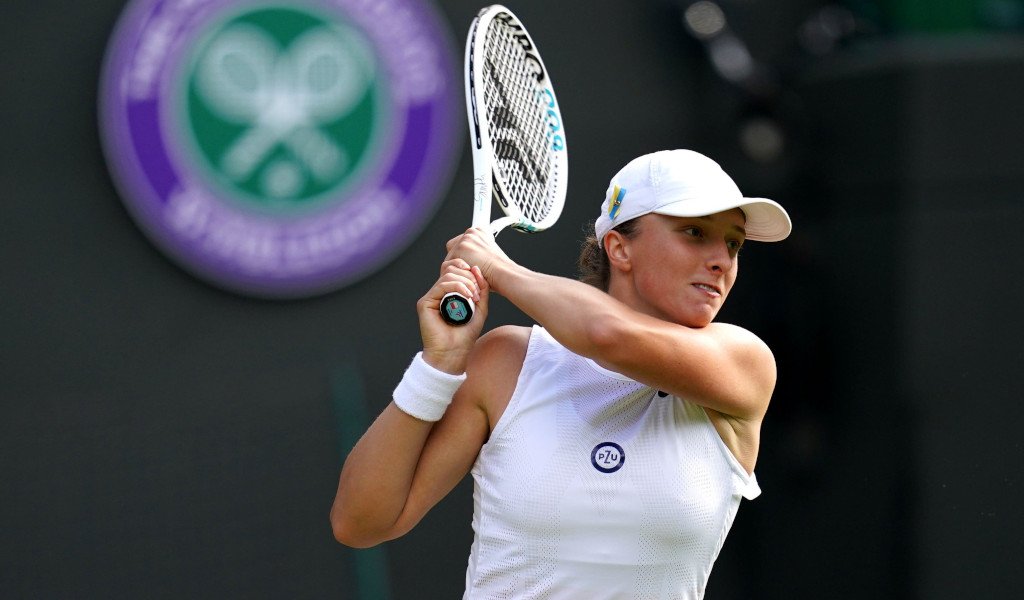 World number one Iga Swiatek extended her winning streak to 37 matches with a three-set victory over Lesley Pattinama Kerkhove but admitted to still finding the grass “pretty tricky” at Wimbledon.

The Polish star was able to equal the 1997 efforts of Martina Hingis with this latest triumph and stayed on course for the title at the All England Club.

Swiatek may be fresh from winning the French Open but has only played twice before at SW19.

Sliding into the third round…

And even with last year’s fourth-round appearance, she is eager to play down expectations after she struggled to a 6-4 4-6 6-3 win over Dutch qualifier Pattinama Kerkhove in just over two hours.

“Honestly during a match I don’t even think about the previous matches and the streak because I don’t think it’s giving me anything at that point,” the 21-year-old said.

“For sure my confidence, I build it during this season. It’s better. It’s getting better and better on every tournament.

“I would say the grass is pretty tricky for me. I’m not going to lie. I mean, I guess you can see that I’m not playing maybe as efficiently as on other surfaces.

“Basically my confidence is getting better overall. But this tournament is tricky and I’m still feeling out how to play the best game here.”

Alize Cornet, who this week suggested she suspected a number of players had Covid-19 at Roland Garros but hid it, is up next for Swiatek in the third round.

Two-time grand-slam champion Swiatek saw one of her potential rivals for the Championships exit at the start of day four after 2021 Wimbledon runner-up Karolina Pliskova suffered a shock defeat to Britain’s Katie Boulter.

Boulter had beat the sixth seed at Eastbourne last week but still upset the odds with a 3-6 7-6 (4) 6-4 success on Centre Court.

Boulter’s win, which sent her through to last-32 at the All England Club for the first time, came two days after her gran died.

The British number three added: “I’ve tried to kind of get my emotions out and deal with the situation, try and keep my head on the tennis. I was lucky because my grandpa managed to come down from Leicester, so we could keep him company and keep supporting him at the same time.”

Serena Williams’ conqueror Harmony Tan will face the home favourite next after she beat Sara Sorribes Tormo not long after she made up with Tamara Korpatsch, who was set to play doubles with Tan on Wednesday only for the Frenchwomen to pull out hours before their scheduled match.

Heather Watson was another British winner on the fourth day after she needed eight minutes to seal an overnight victory against Wang Qiang.

There were tears on Court Two after Simona Halep, who won here in 2019, consigned Kirsten Flipkens to retirement.

Belgian Flipkens, a junior winner at Wimbledon, announced at the start of June this would be her final singles tournament and kissed the grass after a 7-5 6-4 loss.

“Definitely it’s not about my match today, it’s about her,” Halep said on court.

“I really want to congratulate you for the whole life in tennis. We will miss you.”

Badosa is excited to test herself against the veteran, she said: “Yeah, she plays very well on grass.

“She won last week. I practice with her on grass, as well, so I know what I’m going to find out there. She’s with confidence but I think I have the game that I could do a tough match against her. I will give everything on court.”

Elina Rybakina, seeded 17th, edged out Bianca Andreescu 6-4 7-6 (5) to bring the former US Open winner’s comeback showing at Wimbledon to an end.

Elise Mertens and Barbora Krejcikova were among the other seeds to progress.