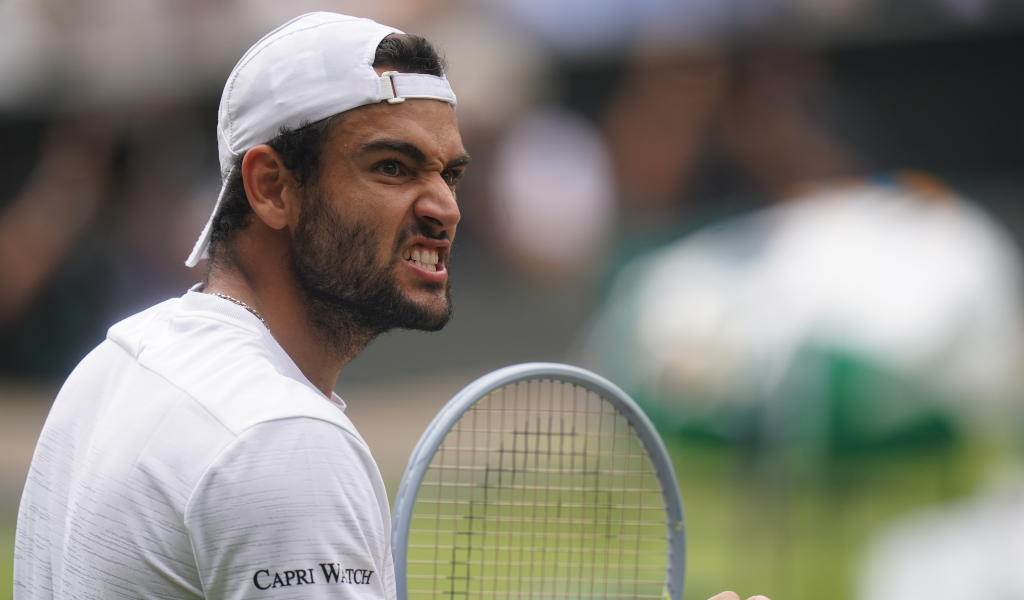 Matteo Berrettini served up a Sunday sporting double for Italy by reaching the Wimbledon final after overpowering Hubert Hurkacz in four sets.

Matteo Berrettini turned up with his very best ⭐#Wimbledon pic.twitter.com/eKZAAAlgW3

The main course may be England’s date with Italy in the Euro 2020 final on Sunday evening, but Berrettini will provide a tasty antipasti when he walks out on Centre Court at 2pm.

Certainly David Beckham, watching from the royal box, will be desperate not to sit through a similar exhibition of Italian domination at Wembley in two days’ time.

Hurkacz was the man who broke many a heart at Wimbledon on Wednesday when he knocked out eight-time champion Roger Federer, having previously accounted for second seed Daniil Medvedev.

But the Polish 14th seed was simply blown away over the first two sets as he faced the non-stop barrage that is the Berrettini serve.

Hurkacz did fashion a break point early in the opener, but the likeable 24-year-old was unable to press it home as Berrettini held for 3-3.

About half an hour and nine games later a dazed and confused Hurkacz found himself two sets down and staring at the same sort of pasting that he had handed out to Federer.

He did at least manage to make himself part of the semi-final in the third, denying Berrettini the chance to unleash his destructive forehand where possible and taking the tie-break to give the crowd, inevitably now backing the underdog, something to cheer.

It will be a first Grand Slam final for Berrettini, who said: “I have no words, really.

“I need a couple of hours to understand what happened. I played a great match, I enjoyed the crowd and I’m really happy. I never dreamed about this because it’s too much for a dream.

“I thought after the third set I felt I deserved to win that set and I said to myself ‘it doesn’t matter’, I felt like the stronger player. Eventually it paid off.

“It’s the best tennis day of my life. Hopefully Sunday will be even better!”