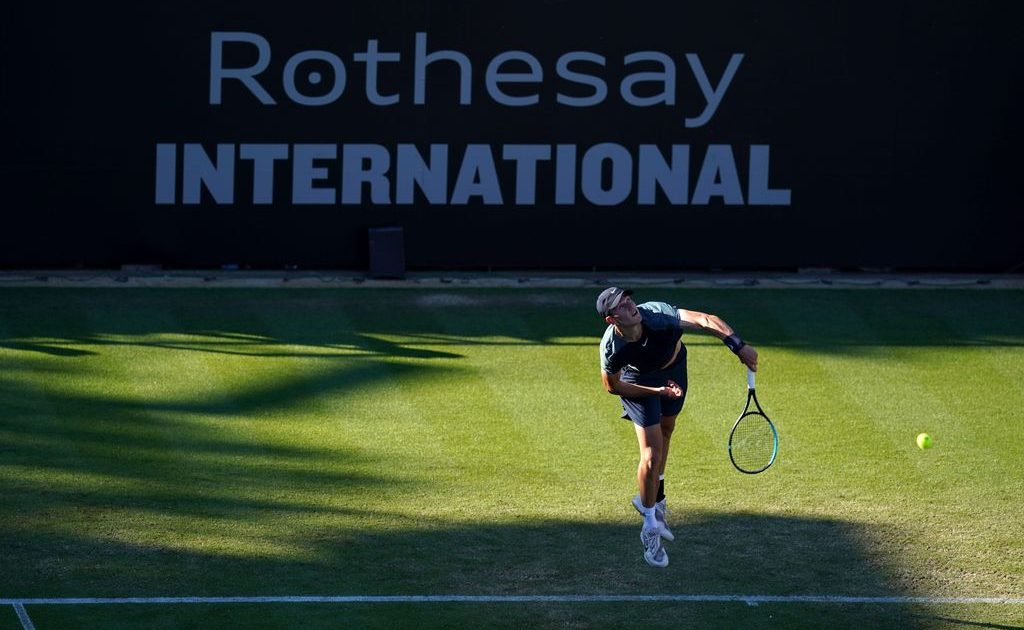 Jack Draper’s dreams of a maiden ATP Tour final were extinguished following an agonising three-set loss to Maxime Cressy at the Rothesay International in Eastbourne.

In a tense encounter containing just a single a break of serve, world number 60 Cressy continued his conquering of the British players to edge through 7-6 (5) 6-7 (2) 6-3.

The France-born American, who defeated Cameron Norrie and Dan Evans in the previous rounds, will face either 2019 winner Taylor Fritz or reigning champion Alex De Minaur in Saturday’s final.

Tournament debutant Draper was playing in his first semi-final at this level and bidding to become the first British male to reach the singles final at Devonshire Park.

Backed by a partisan crowd in the afternoon sunshine, the 20-year-old acquitted himself well against an aggressive opponent with a deadly serve and an equally potent volley.

The pair traded blows at an unrelenting pace, albeit the towering Cressy was holding with slightly more ease.

Wild card Draper, sporting strapping on his left ankle, repeatedly dazzled with a series of fine winners to the delight of the spectators on Centre Court.

Yet the world number 108 was forced to save four break points in the opening set – three in succession having fallen 40-0 down in the sixth game – and faced 10 overall, while it took until the 10th game of the second to gain one of his own – a set point, which went begging.

After Cressy received on-court treatment for an apparent muscular issue at 5-4 behind in the second set, Draper’s refusal to roll over was rewarded as he forced a decider by levelling the contest following the second of two tie-breakers.

The string of holds then resumed until Cressy made the crucial breakthrough to go 4-2 up in the final set.

Draper smashed his spare ball into the crowd in frustration at his failure to hold and then had further cause for regret as two break points came and went in the very next game.

Cressy, 25, retained sufficient composure to survive a further three break points in what proved to be the final game of a match lasting more than two and a half hours, leaving the dejected Draper to switch focus to his forthcoming first-round Wimbledon meeting with Belgian wild card Zizou Bergs.

Earlier in the day, Kvitova was in inspired form as she ended the lengthy winning streak of Haddad Maia with a thrilling success to return to the final of the tournament for the first time since finishing runner-up 11 years ago.

In a titanic tussle of fine margins between a pair of big-hitting left-handers, 14th seed Kvitova deservedly avenged last week’s defeat to her Brazilian opponent at Birmingham thanks in part to a succession of fine winners.

She let out a scream of delight after clinching the opener by edging a tense tie-breaker before immediately following it up with the only break of serve en route to progressing 7-6 (5) 6-4 in just under two hours.

Haddad Maia – whose memorable grass season so far included titles at Nottingham and Birmingham – suffered defeat for the first time in 13 matches.

Kvitova fell to Marion Bartoli in the 2011 Eastbourne final, just weeks before the first of her two Wimbledon triumphs.

Eighth seed Ostapenko, the 2017 French Open champion, awaits the Czech this time around after she made light work of Italian Giorgi to keep herself on track to retain her crown.

The Latvian cantered to the opening set in around half an hour and survived two break points in the third game of the second to breeze through 6-2 6-2.

Ostapenko and Ukrainian partner Lyudmyla Kichenok later progressed to the women’s double final, where they will face Aleksandra Krunic and Magda Linette.