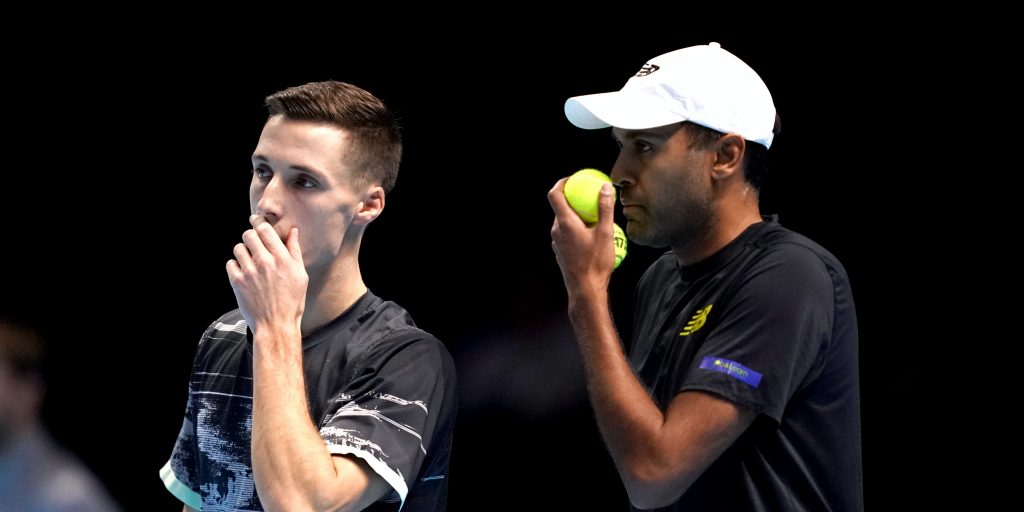 Joe Salisbury, Britain’s sole representative at the Nitto ATP Finals in London, has had his preparation severely disrupted by a coronavirus scare.

The doubles specialist, who will play at The O2 with American partner Rajeev Ram as one of the world’s top eight teams, was getting ready for the Paris Masters two weeks ago when his coach, Rob Morgan, tested positive.

Salisbury subsequently tested negative on three occasions but, although he was able to travel home after four days, Britain’s strict rules on close contacts meant he had to complete 14 days in isolation.

That took him up until Friday, he practised for the first time at The O2 on Saturday and will contest his first match alongside Ram on Sunday evening against Lukasz Kubot and Marcelo Melo.

Salisbury said: “It’s not ideal but I guess I’m fortunate that it was yesterday and not in a few days’ time. If it had been half a week into Paris and then that had happened, I wouldn’t be able to be here. We’ll make the best of it and I’m grateful that I’m still able to play.”

The 28-year-old admitted the incident has been a wake-up call after he had become used to the routines of travelling, testing and life in a bubble that all tennis players have been subject to since the tour resumed in August.

Salisbury said: “I think everybody was a bit stressed by it at the start when we went out to New York, everybody was worried about it, and then kind of got used to it and just accepted that it was a risk that we could have a positive test and accepted we had to stay in the bubble.

“At least for me, I kind of relaxed a little bit about it, I kind of thought, ‘it’s been going fine so far, we’ve all been testing negative’, and I guess assumed it would keep going that way.

“But that’s just the way it is now, you can’t do anything about it apart from be careful.”

Salisbury and Ram made their first appearance at the ATP Finals last year, exiting in the group stage, but should have high hopes of going all the way this time after a superb season.

They won their maiden grand slam title at the Australian Open and also reached the latter stages of the US Open and French Open, and were leading the yearly standings until their withdrawal from the Paris Masters.

It was unfortunate timing given they had also been forced to pull out of the ATP event in Vienna the previous week because of an injury to Ram, leaving them very short of time on court.

Salisbury said of his first practice: “It was OK. It takes a little bit to get back into it but it always feels a little bit like that when you’re playing somewhere new, getting used to the courts, the balls, new environment.

“I was hitting the ball pretty well. Having not played any points or matches for a long time – we’ve only played one match in the last five weeks since the French Open – we’re practising again later, playing some practice points and then we’re on tomorrow. Not the best preparation but we’ll see how it goes.”