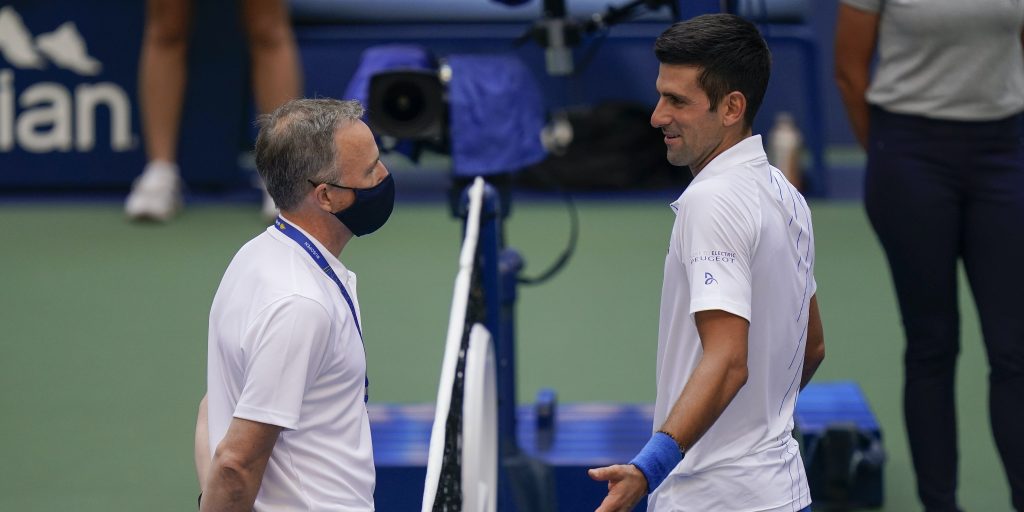 John McEnroe has warned Novak Djokovic he will have to face up to being the “bad guy” for the rest of his career after the world No 1 was defaulted from the US Open for striking a ball which hit a line judge.

McEnroe, himself no stranger to Grand Slam defaults, accused Djokovic of making a “rookie mistake” after the incident, which saw the Serb tossed out of the tournament towards the end of his first set against Pablo Carreno Busta.

Djokovic tweeted an apology hours after the incident but, having already courted controversy this year by staging an ill-fated tournament amid the coronavirus pandemic, McEnroe believes he will struggle to live the incident down.

McEnroe told ESPN: “The pressure just got to him, I think. A lot’s been going on off the court, it’s obviously affected him and now whether he likes it or not he’s going to be the bad guy for the rest of his career.

“It was a rookie mistake made by him to hit a ball back where he wasn’t even looking where he was hitting it. He’s been there and done that, and certainly I know from some experience that you’ve got to be careful out there.”

McEnroe was the first player to be defaulted from a grand slam tournament at the 1990 Australian Open, after picking up a series of code violations during his match against Mikael Pernfors.

And McEnroe admitted he wished there could have been some other solution that would have enabled Djokovic to avoid being defaulted for the incident.

“I’d like to tell you I disagree with it and I’d like to find a different way to continue to play – that would obviously have been prefaced by whether or not the lineswoman’s OK,” added McEnroe.

“You’d like to at least think because it was obviously not intentional, that you try to figure out a way to keep an all-time great player going after history on the court.. (but) I get that the rules state you’ve got to treat everyone the same.”

The top seed and 17-time Grand Slam champion had just dropped serve to trail his Spanish opponent 6-5 in the opening set of their fourth-round match on Arthur Ashe Stadium.

Djokovic, who had missed three set points at 5-4 before hurting his shoulder in a fall, hit a ball behind him without looking that struck a female line judge in the throat.

The 33-year-old wrote on Instagram: “This whole situation has left me really sad and empty. I checked on the lines person and the tournament told me that thank God she is feeling OK.

“I’m extremely sorry to have caused her such stress. So unintended. So wrong.”

Djokovic pleaded his case during lengthy discussions with tournament referee Soeren Friemel and Grand Slam supervisor Andreas Egli, but the officials’ mind was made up.

It was unquestionably an accident but it is not the first time Djokovic has flirted with such a scenario.

“I don’t think that any one of us do this kind of thing intentionally. It’s just the moment. The referee and the supervisor do the right thing, but it is not easy.”