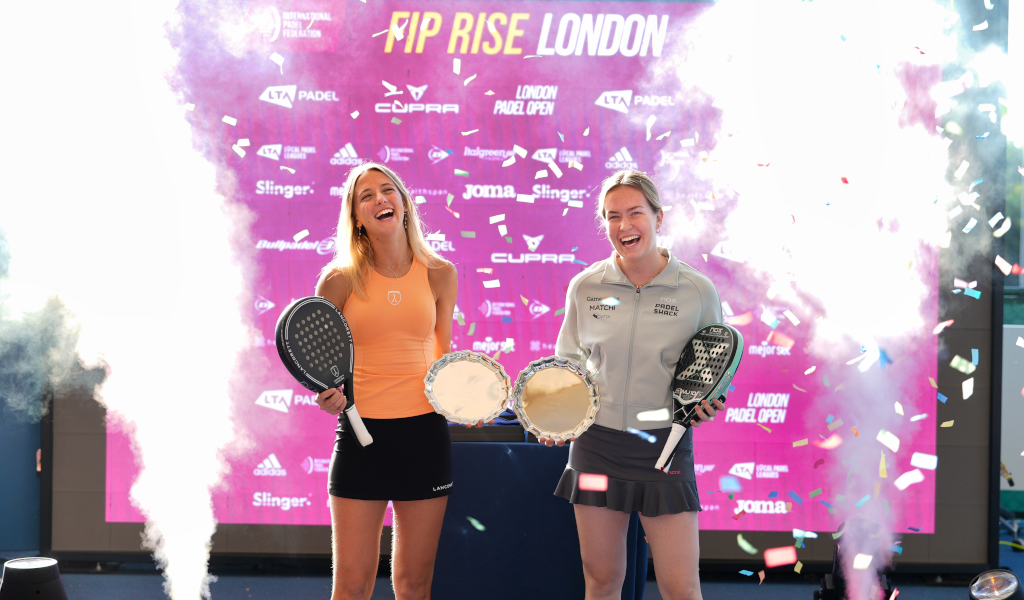 Great Britain’s No 1 padel player Tia Norton delivered big at the LTA’s first professional padel event in the UK, the London Padel Open, as she won the women’s title alongside Carla Fito Fernandez while Bram Meijer and Sten Richters won the men’s final.

Norton and Fito Fernandez were seeded second for the first-ever tournament at the LTA’s National Tennis Centre and they held off fourth seeds Wendy Barsotti and Elodie Invernon 4-6, 6-1, 7-6 (7-4) in the semi-final in two hours to book their spot in the showpiece event.

Up against top seeds Maaike Betz and Natalia Sanz Garcia in the final, the British-Spanish combination proved too strong as they won 7-5, 6-1 in just one hour.

“To come away with a win from this tournament is absolutely incredible,” Norton said. “We played a really good tournament and were really happy overall how we competed. We came into the tournament with no expectations, every tournament we go match by match and here we are with a win at the end of it.

“The venue itself is absolutely incredible. The LTA have held such an incredible event, so I want to thank them for putting on such a great organisation, and of course to come away with a win at such a professional event, the first professional event in the UK. It’s always nice winning on home turf but this one feels a little bit special.”

Exclusive: Tia Norton’s big dream and her mission to spread the padel message

The unseeded Meijer and Richters 6-2, 6-3 were the surprise winners on the men’s side as they first beat British No 1 Christian Medina Murphy and partner Javier Navarro Perez in the last four before upsetting fifth seeds Bastien Blanque and Jose Jiminez Casas 7-6, 6-3 in the final.

The London Padel Open was part of the Cupra FIP (International Padel Federation) Tour and the tournament was launched as the LTA look to capitalise in the rise of the sport of padel – a cross between tennis and squash – over the past few years with more than 89,000 active padel players and 200 courts across the country.

Tom Murray, Head of Padel at the LTA, said: “I’m incredibly proud of Tia’s win. I never doubted her and had a feeling she might pull this one off.

“It’s unfortunate that both Hansie Ruddick and then Christian Medina Murphy in the men’s both lost in their respective semi-finals matches because it would’ve been fantastic to have more Brits in the finals.

“The overall feedback from the players has been second to none and are congratulating us on a great event and asking when our next tournament is so they can fit it into their calendars.”