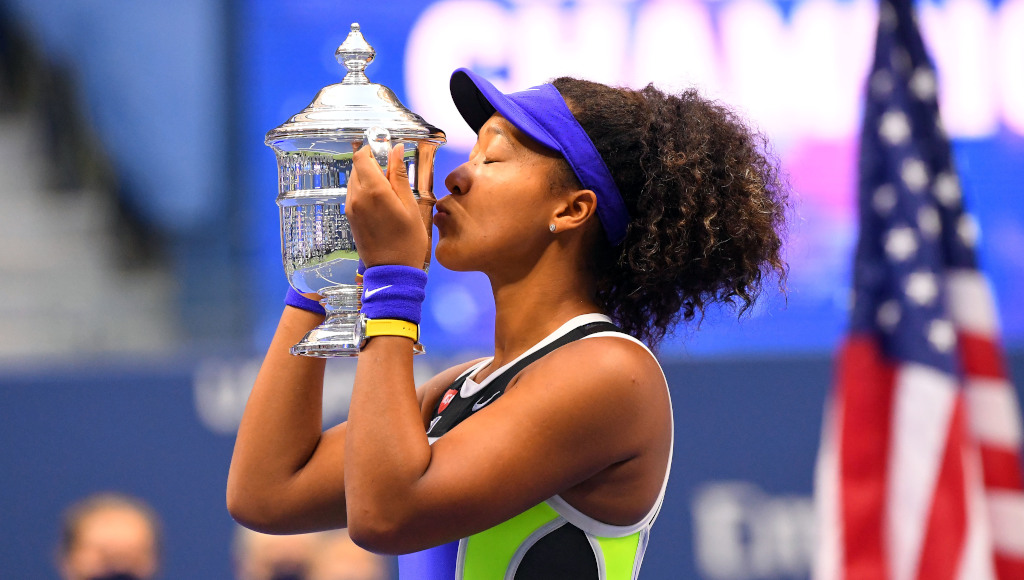 Having found her voice off the court, Naomi Osaka returned to the top on it with her third grand Slam title.

The 22-year-old from Japan was comprehensively outplayed by Victoria Azarenka in the first set but recovered brilliantly to triumph 1-6, 6-3, 6-3.

The trophy goes into her collection alongside ones from the 2018 US Open, where her achievement was overshadowed by the infamous row between Serena Williams and umpire Carlos Ramos, and the 2019 Australian Open.

But this is a story about more than just tennis, with Osaka using her platform to promote Black Lives Matter and honour victims of violence and brutality.

Her seventh face mask bore the name of Tamir Rice, a 12-year-old boy killed by a policeman while playing with a toy gun in 2014, while Osaka’s boyfriend, rapper Cordae, sat in the stands with a T-shirt bearing the words ‘Defund the police’.

From start to finish.@naomiosaka completes an impressive #USOpen with a 1-6, 6-3, 6-3 win over Victoria Azarenka in the final! pic.twitter.com/GzhXpFVhnf

Asked at the presentation ceremony what message she had hoped to send, Osaka replied sharply: “Well what was the message that you got was more the question. I feel like the point is to make people start talking.”

Osaka has certainly done that and, in playing for a cause bigger than herself, has rediscovered the clear-mindedness that characterised her first two titles.

She said: “My life was always go, go tennis-wise, especially after the previous US Open that I won. It definitely accelerated things, and I’ve never had a chance to slow down.

“The quarantine definitely gave me a chance to think a lot about things, what I want to accomplish, what I want people to remember me by. I came into this tournament with that mindset. I think it definitely helped me out.”

Also on Osaka’s mind was Kobe Bryant. She was friends with the basketball superstar, who was tragically killed in a helicopter crash in January.

“I feel like at this point there are certain things that I do that I hope can make him proud,” she said.

-from Naomi. always with love.

Many people would argue Osaka is great right now, and the way she turned around a match that looked to have got away from her was hugely impressive.

Osaka lost the first set in just 27 minutes and was a point away from being 3-0 down in the second but she slowly began to play the contest on her terms and survived a late wobble when Azarenka fought back from 4-1 to 4-3 in the decider.

Asked how she turned the match around, the 22-year-old added: “I just thought it would be very embarrassing to lose in under an hour so I just have to try and stop having a really bad attitude.”

After her moment of victory, Osaka lay on the court soaking in her achievement in the cavernous surrounds of an almost empty Arthur Ashe Stadium.

“I was thinking about all the times I’ve watched the great players collapse onto the ground and look up into the sky.,” she said.

“I’ve always wanted to see what they saw. For me, it was really an incredible moment. I’m really glad I did it.”