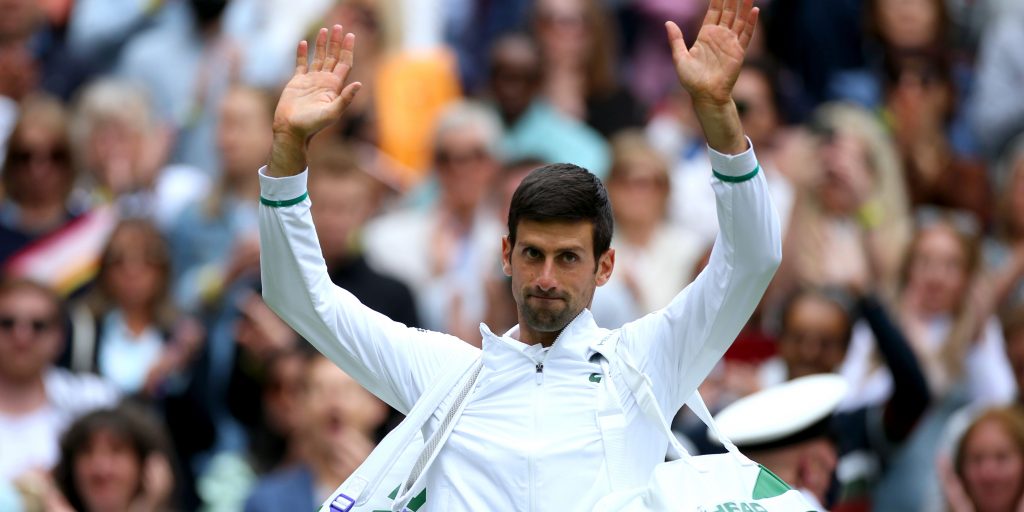 Novak Djokovic looked in ominous form to remain on course for a third straight Wimbledon title and was joined in the third round by former champion Andy Murray after more late-night drama.

World number one Djokovic produced a scintillating display against Kevin Anderson earlier in the day in what was a repeat of the 2018 final at the All England Club.

A straight-sets victory proved enough for Djokovic to claim the title three years ago and he again made light work of the big-serving South African to progress with a 6-3, 6-3, 6-3 win.

The Serbian, who is looking to draw level with Roger Federer and Rafael Nadal on 20 Grand Slam triumphs, experienced some difficult moments on the slippery Centre Court surface but he even won that battle.

“It has only been two matches in the tournament and still a long way to go,” Djokovic said.

“Hopefully I can go very deep, that is the goal but I am very pleased with the way I have been playing so far.”

Murray joined his old rival in the last 64 following another marathon match on Centre Court.

The two-time singles’ winner at the All England Club looked to be heading out when he trailed Oscar Otte by two sets to one before a break was required to close the roof.

He admitted in a courtside interview: “I am obviously tired and I fell over a couple of times, pretty slick courts but considering everything I feel all right. The hip feels good!

It never gets old, does it?

Next up for Murray is a third-round meeting with 10th seed Denis Shapovalov, who got a walkover after Pablo Andujar had to withdraw with a rib injury.

Day three proved a memorable one for the British contingent at SW19 after Dan Evans also clinched a second win at the Championships with a 6-3, 6-3, 6-4 triumph over Croatian Dusan Lajovic.

It equalled his best run at Wimbledon and American Seb Korda is up next for the 22nd seed, who said: “I’ve not played my best tennis just yet so hopefully that’s coming. I’m working hard. I’m trying to focus hard on finding it.”

Liam Broady pushed ninth seed Diego Schwartzman all the way in a gruelling round two fixture which lasted three hours and 14 minutes before the home favourite exited SW19.

A 4-6, 6-2, 6-1, 6-4 victory for the Argentinian told only half the story with the Court 12 crowd treated to an array of lengthy rallies but crucially the Stockport-born ace could only take three of his 18 break points.

Cameron Norrie, seeded at a grand slam for the first time, recovered from a set down to beat Lucas Pouille for only his second ever win at Wimbledon.

Fifth seed Andrey Rublev reached the third round with a straight-sets victory over Lloyd Harris while fellow seeds Fabio Fognini and Karen Khachanov also progressed into the last 62.

The wet weather during the first two days saw a number of first-round ties completed on Wednesday and there were some notable departures.

Queen’s Club winner Matteo Berrettini backed up his exploits from earlier in the month with victory over Guido Pella on Court Three, but Gael Monfils needed a decider against Christopher O’Connell. Grigor Dimitrov, seeded 18th, had less trouble against Spaniard Fernando Verdasco.

But 21st seed Ugo Humbert was knocked out by Nick Kyrgios after the Australian recovered from a fall to clinch the fifth set 9-7 with their match suspended at 11pm on Tuesday night.

Sam Querrey, who reached the semi-finals four years ago, claimed the scalp of Pablo Carreno Busta – the 11th seed – in straight sets and 12th seed Casper Ruud lost in five to Jordan Thompson.

Aslan Karatsev (20) and John Isner (28) were also casualties in the men’s draw with attention turning on Thursday to eight-time Wimbledon winner Federer as he attempts to reach round three by seeing off Richard Gasquet.