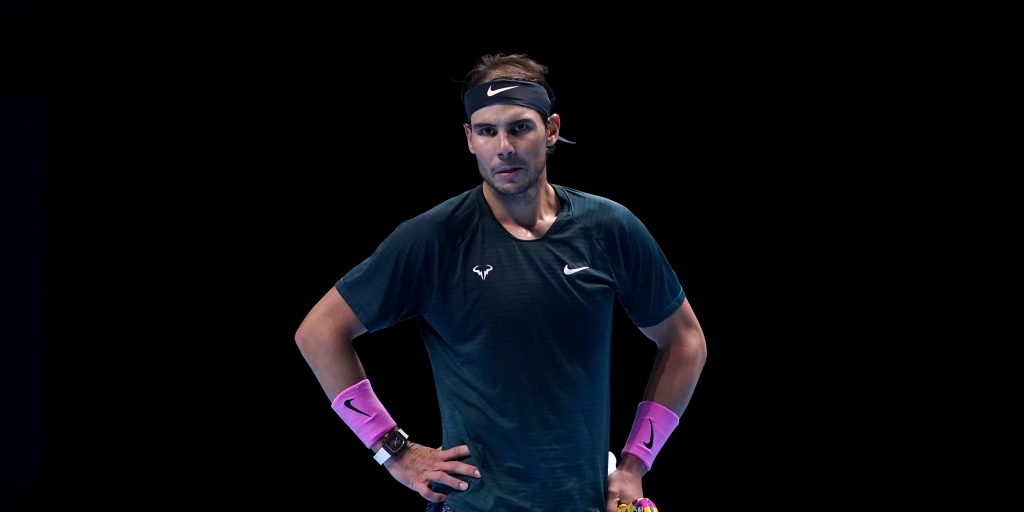 Novak Djokovic and Rafael Nadal were both sent packing from the Nitto ATP Finals as Dominic Thiem and Daniil Medvedev staged impressive comebacks to set up a title decider.

A glance at the grand slam winners’ list will show that the old guard are still rightful leaders of the pack but the snapping at their heels has more bite now, particularly from Thiem and Medvedev.

Both topped their groups after impressive victories over Nadal and Djokovic, respectively, and here they showed impressive resilience to turn the tables on the world’s top two.

Djokovic looked like he would be the one staging the miracle comeback when he saved four match points in the second set tie-break against Thiem, only for the US Open champion to recover from 0-4 in the deciding tie-break and clinch a 7-5, 6-7 (10-12), 7-6 (7-5) victory.

Remarkably it was a virtual repeat of 12 months ago, when Djokovic led Thiem 4-1 in a deciding tie-break during a round-robin match.

Medvedev has been the most impressive player this week having not dropped a set until Saturday, when he was staring at the exit door at a set and 5-4 down to Nadal.

The world number two had fought back from 4-1 down in the second set and appeared to have the upper hand mentally but Medvedev played a perfect return game to break to love and then rode his luck in the tie-break.

The Russian – who did not win a match on his debut 12 months ago, including losing to Nadal from 5-1 up – then took advantage of a rare lack of ruthlessness from his opponent when he failed to close out a game at 3-3 and did not look back.

Nadal, whose search for a first ATP Finals title goes on, said of the 5-4 game: “He played some good points and I make a couple of mistakes. Then he played a good tie-break.

“I should be winning my serve in the third, the one that I lost. I had an easy volley to close the game. Small details make a big difference. Just well done for him and not enough good for me.”

He praised Thiem, saying: “What he did from 0-4 in the third set tie-breaker was just unreal. I don’t think I played bad. I made all of my first serves. He just crushed the ball.”

Thiem lost an epic final to Stefanos Tsitsipas 12 months ago and now has the chance to cap a brilliant year in which he won a well-deserved first grand slam title and also reached the Australian Open final.

The Austrian breathed a sigh of relief after his second-set stumble, saying: “I thought that after my first big title in New York, maybe I’m going to be a bit more calm, but it was a mistake I guess. It was so much on the edge this match. I’m just incredibly happy to be through.”

This victory saw Thiem become only the second player after Andy Murray to beat Djokovic, Nadal and Roger Federer at least five times each, and he has a winning head-to-head against all three since the beginning of last season.

Even before he won in New York, the 27-year-old was clearly the closest challenger to the trio but he laughed off suggestions there was now a big four again, with him taking Murray’s place.

He said: “Of course not. If you compare especially the big titles, I’m so far away.

“But I love to play against them. We younger players can feel super happy that these three living legends are still around and we can compete with them. Every match against them is a great opportunity.”

Medvedev, who is on a nine-match winning streak after claiming victory at the Paris Masters earlier this month, has the chance to become the first player ever to beat the world’s top three players at the ATP Finals.

He said of Thiem: “It’s great that we managed to beat two of the biggest players in the history of sport. I think it’s super for tennis. We are starting to make our mark.

“Dominic won his first slam, he’s playing unbelievable tennis right now. Hopefully I can play good like this and I can for sure cause him some trouble.”

Salisbury was looking to become the first British player to reach the doubles final in the event’s 50-year history, while victory would have seen the Australian Open champions finish the season as the world’s number one team.