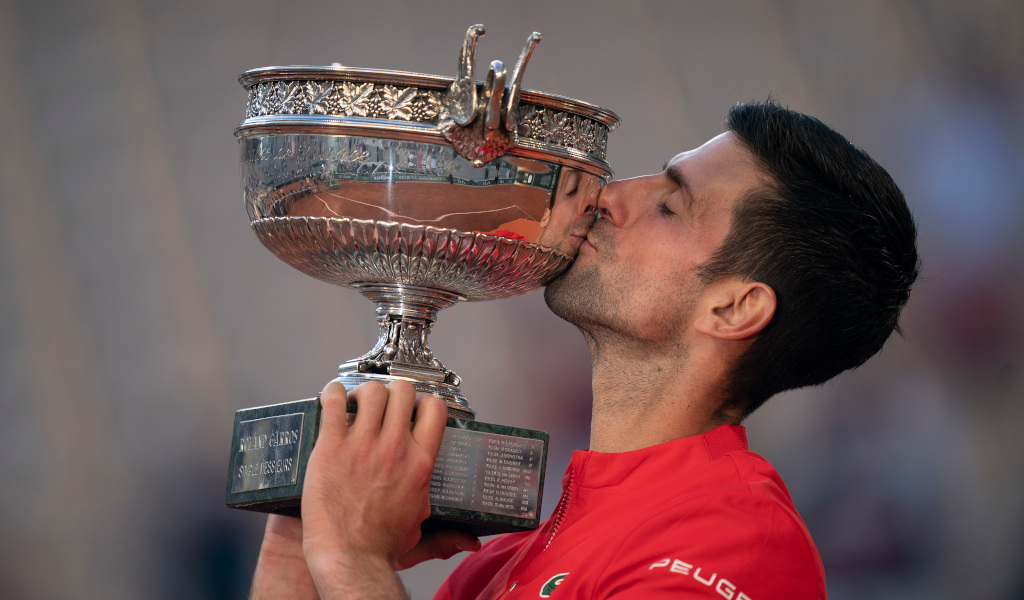 Novak Djokovic once again showed that you can never write him off as he fought back from two sets down to beat Stefanos Tsitsipas in a thrilling French Open final to secure his 19th Grand Slam title and complete a second Career Grand Slam.

Just 48 hours after a lung-busting comeback win to dethrone King of Clay Rafael Nadal in the semi-final, Djokovic again found himself up against it as he lost the two opening sets before pulling off a comeback of note to win 6-7 (6-8), 2-6, 6-3, 6-2, 6-4 in just over four hours at Roland Garros.

The win sees the world No 1 move to one major behind the joint record of Nadal and Roger Federer and he will be a hot favourite to draw level with his two rivals at Wimbledon in July.

However, he was on the back foot early on as Tsitsipas was a man on a mission in the first two sets as he stood firm to his much more illustrious opponent before starting to dominate with his hand skills from heaven, especially at the net, proving too much for the top seed.

Djokovic was exceptional on his first serve initially as he won his first three service games to love while the Greek had to work for his games, but the tide started to turn as the world No 1’s first serve percentage started to drop and there was an opening in game 10 as Tsitispas had a break point, but could not convert.

In the flash of an eye Djokovic found himself ahead after breaking in the next game, but the Greek refused to go down so easily and produced top-class tennis and broke back immediately and it eventually went to the tie-breaker.

After Tsitsipas raced into a 4-0 lead, Djokovic then won four points in a row, but he couldn’t quite keep it up as the Greek eventually edged the tie-breaker.

If Tsitsipas was good in the opening set, he was even better in the second as he picked up where he left off and broke the Djokovic serve in the first game and he was relentless for a few games and it came as no surprise when he grabbed another break in game seven before serving it out to take a two-set to love lead.

Djokovic, though, had been here before at the 2021 French Open as he was also two sets to love down against Lorenzo Musetti in the fourth round and he used the same tactics, including taking a bathroom break after the second set, to get back in the game.

The momentum certainly started to shift and a colossal 11-minute fourth game saw Djokovic’s transformation complete as he came out on top of the slugfest as he converted on his fifth break point.

That break proved to be more than enough as the Serb went on to take the set.

Leaping into another comeback? @DjokerNole takes the third set 6-3 against Tsitsipas. #RolandGarros pic.twitter.com/C2ADWhUcyP

Tsitsipas was certainly starting to feel it physically and he required medical treatment on his lower back at the end of the third set and Djokovic made sure that he kept impetus as he nailed some impressive shots to break in the opening game.

After a comfortable hold, he was again on the attack in game three and after some uncharacteristic errors, he finally got the job done for the double break.

Although Tsitsipas managed to get two games on the board, Djokovic was always in the ascendency and served it out to make it two sets each and take it to a first five-set match at Roland Garros since 2004.

Djokovic threatened to break early for a third set in a row as he was up 30-40, but this time the Greek stood firm and held.

Well, for that game anyway as the third game was another monumental effort from two drained players and this time Djokovic managed to break.

Tsitsipas certainly tried to make a game of it as he threw everything that he had at the world No 1, but Djokovic came up with something better on each occasion and, in fact, didn’t look like he would lose his serve.

He finally had his first match point at 40-30, but Tsitsipas had one final act as he saved it before the Serbian crossed the finish line at the second time of asking to win a second title at Roland Garros.

The title also means he is also only to complete two Career Grand Slams in the Open Era with Rod Laver and Roy Emerson securing a similar feat in the amateur era.