‘It is an ongoing love affair between me and Rod Laver Arena,’ says Novak Djokovic after Australian Open win 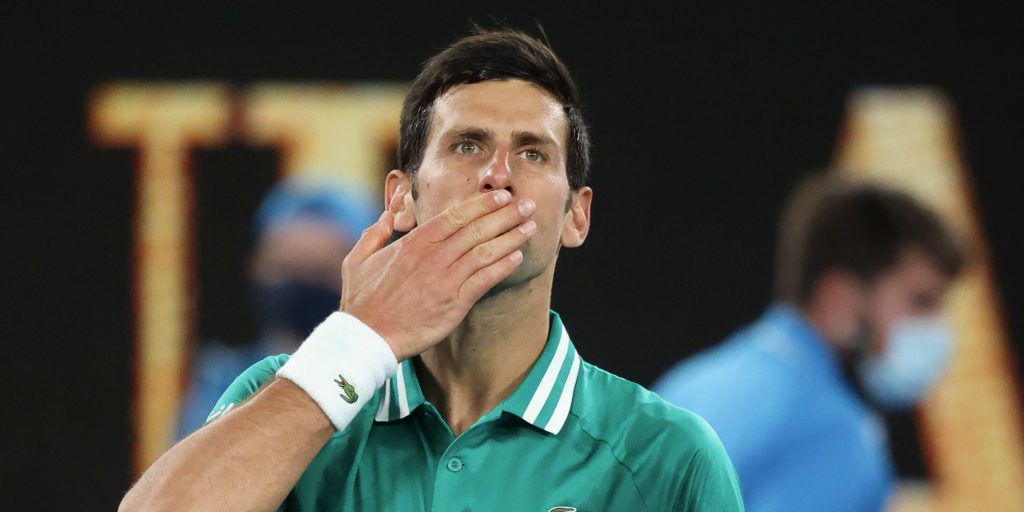 Novak Djokovic was able to carry on his “love affair” with the Rod Laver Arena as his quest for a ninth Australian Open title began in usual fashion.

The world No 1 is the king of Melbourne Park, having won eight times over the last 13 years, and he put on a royal performance to take down Jeremy Chardy.

It was no surprise that Djokovic won in straight sets, claiming a 6-3, 6-1, 6-2 victory, as in 14 meetings against the Frenchman he has yet to drop a set.

Picking up where he left off 👑

Make that 1️⃣5️⃣ wins in a row at the #AusOpen for @DjokerNole.#AO2021 pic.twitter.com/kIC3HxAR3n

Djokovic enjoyed playing in front of a crowd again and said in his on-court interview: “It feels great. It makes my heart full to see the stadium again. This is the most people I have seen on a tennis court for 12 months.

“It is an ongoing love affair between me and this court, the Rod Laver Arena. Hopefully I can have many great matches with this kind of performances.

“I wanted to start off well tonight, first match night session, very special. One of the most special courts on the tennis tour that we have. It is my most successful and favourite courts on the tour. I have been very lucky to have some success on the court and have some great memories.”

Djokovic beat Dominic Thiem in last year’s final and the Austrian also made smooth progress into the second round.

Thiem said: “I felt nerves because it was a long time until the slam, more than three weeks from when we arrived to Adelaide. It was not easy.

“It was amazing that we could practice, but three weeks is a long time, and if you’re unlucky or especially me, if I practice somehow too many days in a row, I start to play worse again instead of better. So I really had to find the right balance.”

Alexander Zverev recovered from a racket-smashing tantrum after losing the first set to beat Marcos Giron, while Grigor Dimitrov, the 2017 finalist, overcame what he described as his toughest ever first-round match, beating former US Open champion Marin Cilic in straight sets.

“I always like tough first rounds, but that was a little extra, I would say, to start off,” the Bulgarian said.

“What can I say? It’s been an interesting first round. Obviously I really needed to focus on my side of the net. He’s been a very, how can I say, one of the toughest opponents that I ever played I think in a first-round match.”

Gael Monfils was the biggest casualty of the day as he lost an gruelling five-set match to Emil Ruusuvuori.

The Finnish player had been Monfils’ hitting partner during the two-week quarantine in the build-up to the tournament and clearly made notes as he earned an impressive 3-6, 6-4, 7-5, 3-6, 6-3 win.

The Frenchman, 34, did not take it well after the game and fighting back the tears he said: “I don’t have any confidence. I would like to get out of this nightmare but I can’t. I don’t know when it’s going to end. It’s hard. Every time I get here I feel judged, I’ve lost again.”

Denis Shapovalov and Jannick Sinner produced a thrilling end to the day with a five-set battle that finished at close to 1am.

Shapovalov, seeded 11th, will have cursed his luck when he saw the draw as it pitted him against the highest-ranked unseeded player and one who won one of the warm-up tournaments last week.