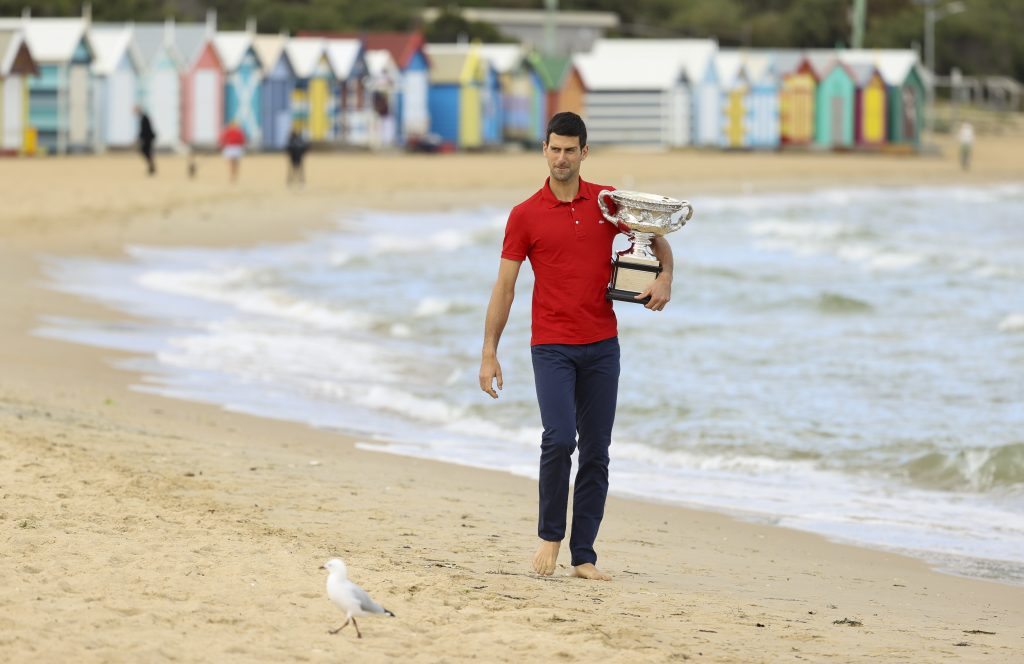 Novak Djokovic remains the king of Melbourne Park after clinching a ninth Australian Open title with a comfortable victory over Daniil Medvedev.

The world No 1 had never been beaten in a final at his most successful tournament, but that record seemed to be under considerable threat given the form of his opponent, who went into his second grand slam final on a run of 20 successive victories.

But Djokovic gave another reminder of what makes him one of the greatest exponents the sport has ever seen with a relentless display of baseline hitting to win 7-5, 6-2, 6-2.

The King of Melbourne Park.

The victory brought him a third successive title in Melbourne and an 18th Grand Slam crown overall, moving him to within two of Roger Federer and Rafael Nadal at the top of the men’s all-time standings.

This was one of the more remarkable of those 18, with Djokovic looking down and out after sustaining an abdominal injury in the third round against Taylor Fritz and battling through matches against Milos Raonic and Alexander Zverev.

He declared himself back in peak condition after beating Aslan Karatsev in straight sets in the semi-finals, which proved to be bad news for Medvedev.

The Russian’s strengths are very similar to those of Djokovic, with the 25-year-old a relentless hitter from the baseline, particularly on the backhand side, and a tremendous athlete for his 6ft 6in frame.

He had won three of his last four matches against Djokovic, including in straight sets at the ATP Finals in London in November, but he quickly discovered the Serbian in Melbourne is a different animal.

Djokovic set his stall out by racing to a 3-0 lead, only for Medvedev to fight back and level.

The world number one’s serve has been particularly impressive this tournament, though, arguably keeping him in it when he was struggling physically, and he held comfortably from there before breaking to take the first set.

Tactically it was a very smart performance from the top seed, who was making Medvedev play from the centre of the court, particularly off his forehand, and drawing the errors he was looking for.

The Djokovic train is full steam ahead 🚂@DjokerNole races to a 3-0 lead in the third set against Daniil Medvedev, having won the first two sets.#AO2021 | #AusOpen pic.twitter.com/ozEYnUSubF

Djokovic’s consistent excellence has the effect of making the court seem smaller and smaller for his opponent, and Medvedev started to over press, aiming closer to the lines and missing.

A break of serve to start the second set was swiftly snuffed out by a run of four games in a row for Djokovic, and even smashing a racket did nothing to alleviate Medvedev’s frustration.

Another break of serve handed Djokovic the second set, and the match was all but over when Medvedev, missing only the steam coming out of his ears, dumped a volley into the net to trail 2-0 in the third.

Medvedev had fought back from two sets down to push Nadal to a fifth set in his previous slam final at the US Open in 2019, but that was never on the cards here and Djokovic took his first match point with an overhead.

With his ninth title, the 33-year-old becomes only the second man after Nadal in Paris to win a Slam more than eight times.

Djokovic’s success also continues the unprecedented dominance of himself, Federer and Nadal, who have now won 15 of the last 16 Slam titles despite all being well into their 30s.