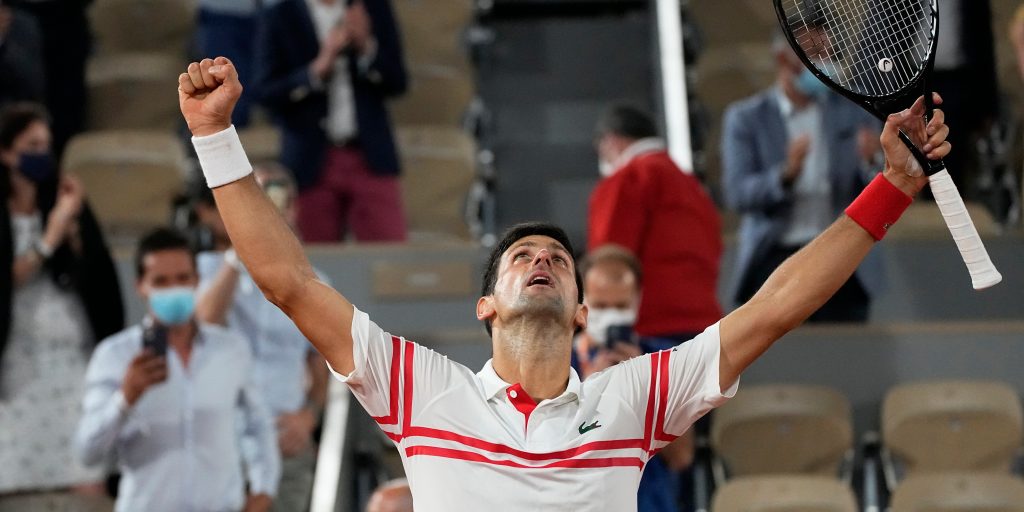 Novak Djokovic produced one of the performances of his life to dethrone Rafael Nadal at Roland Garros on a night of extraordinary sporting drama.

The great Spaniard went into the contest having won 105 of his previous 107 matches on the Parisian clay, losing only to Robin Soderling in the French Open fourth round in 2009 and Djokovic in the last eight six years ago.

Impossible Achieved 👊@DjokerNole becomes the first player in history to defeat Nadal in a Paris semi-final, besting the Spaniard 3-6, 6-3, 7-6(4), 6-2 to reach the title match.#RolandGarros pic.twitter.com/Cfy4178lSW

The world No 1 said: “Definitely the best match that I was part of ever in Roland Garros for me, and top three matches that I ever played in my entire career, considering the quality of tennis, playing my biggest rival on the court where he has had so much success and has been the dominant force in the last 15-plus years, and the atmosphere, which was completely electric.

“Just one of these nights and matches that you will remember forever.”

Djokovic must now rest and recover before he takes on Stefanos Tsitsipas – winner of a five-set contest with Alexander Zverev earlier on Friday – in the final on Sunday, bidding for a 19th Grand Slam title and to become the first man in the Open era to win each title at least twice.

He’s done it! 🙌@DjokerNole knocks out defending champion Nadal 3-6, 6-3, 7-6(4), 6-2 in an instant classic to reach the final.#RolandGarros pic.twitter.com/IlATNYTioZ

Nadal had been trying to claim the outright men’s record with 21 Slam titles and went in as a clear, albeit narrow, favourite, particularly given his drubbing of Djokovic in the final last October.

The first five games were a near carbon copy of that match, with Nadal finding the answer to everything Djokovic could throw at him and moving into a 5-0 lead, but from there it swerved off in a completely different direction entirely.

Djokovic pulled three games back to sow seeds of doubt in Nadal’s mind and was the better player thereafter but, such is the power of the clay-court master, it could still have gone either way.

The second and third sets were packed full of points that seemed impossible, the two men playing out a gladiatorial contest that was part boxing match, part chess as they sought to keep the other out of his comfort zone.

Djokovic just about hung on to his advantage through the second set and then led 5-3 in the third only to show a moment of hesitation that was all Nadal needed to claw his way back.

He had a set point at 6-5, saved by a precision Djokovic drop shot – a tactic that was more foe than friend all evening but came to his rescue when he needed it most.

The tie-break was nip and tuck until Nadal, normally the most solid of volleyers, put one long at 4-3 that would have left a club player with head in hands.

Djokovic was not so charitable and, for just the fifth time at Roland Garros, Nadal lost a second set in a match.

The biggest cheer of the night came with the announcement that the fans, who had been expected to be ejected to comply with Paris’ 11pm curfew, were in fact being allowed to stay.

Nadal made a statement with a break to start the fourth set but it was Djokovic who was in control of more of the points and, for once, the weary champion had no answer.

Djokovic insisted he had not been too bothered by losing the first five games, saying: “Even though I didn’t have such a great start, I was not too nervous because I felt like I was hitting the ball very well.

“It was just a matter of me working my way into the match and adjusting to his ball, which is completely different than any other player’s ball.

“But I was ready. I was feeling good mentally, physically. I was motivated. I had a really clear plan in tactics, what I needed to do in order to perform better than I have in last year’s final.”

Nadal was given a long ovation as he left the court, and Djokovic said: “The amount of wins that he has made on this court is incredible. Each time you step on the court with him, you know that you have to kind of climb Mount Everest to win against this guy here.”

Nadal was left to rue a lack of precision at important moments, saying: “Probably it was not my best day out there. Even if I fought, I put a lot of effort, the position on the shots hasn’t been that effective tonight.

“Against a player like him that takes the ball early, you are not able to take him out of his positions, then it is very difficult. Well done for him. I tried my best and today was not my day.”