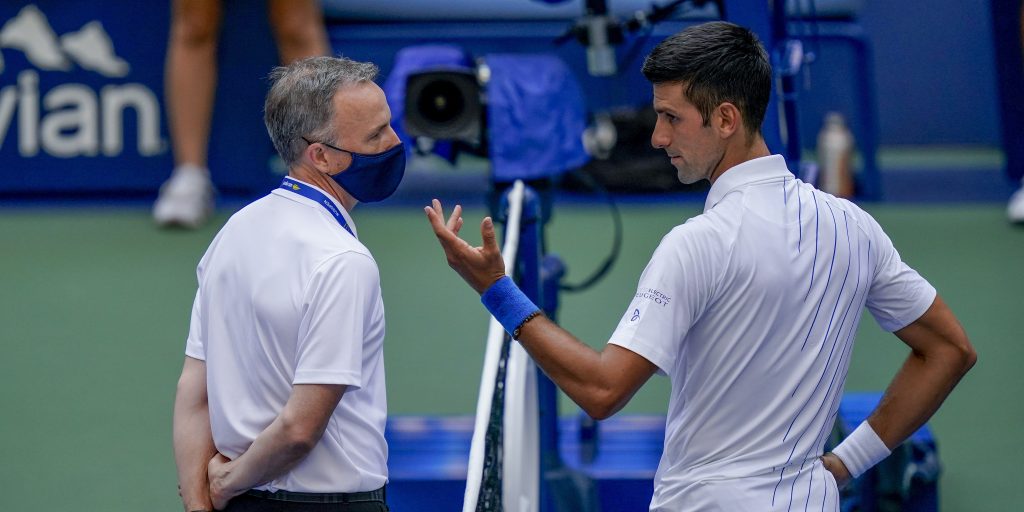 Novak Djokovic has apologised after being defaulted from the US Open for accidentally hitting a line judge with a ball struck in annoyance.

Djokovic, who had missed three set points at 5-4 before hurting his shoulder in a fall, hit a ball behind him without looking that struck a female line judge in the throat.

The 33-year-old wrote on Instagram: “This whole situation has left me really sad and empty. I checked on the lines person and the tournament told me that thank God she is feeling OK.

“I’m extremely sorry to have caused her such stress. So unintended. So wrong.”

Djokovic pleaded his case during lengthy discussions with tournament referee Soeren Friemel and grand slam supervisor Andreas Egli, but the officials’ mind was made up.

He subsequently accepted the decision, saying in his statement: “As for the disqualification, I need to go back within and work on my disappointment and turn this all into a lesson for my growth and evolution as a player and human being.

“I apologise to the @usopen tournament and everyone associated for my behaviour. I’m very grateful to my team and family for being my rock support, and my fans for always being there with me. Thank you and I’m so sorry.”

A statement from tournament organisers read: “In accordance with the Grand Slam rulebook… the US Open tournament referee defaulted Novak Djokovic from the 2020 US Open.”

Djokovic won his 17th slam singles title in Australia and was an overwhelming favourite to make it 18 in New York having not lost a match all season.

It was unquestionably an accident but it is not the first time Djokovic has flirted with such a scenario.

“I don’t think that any one of us do this kind of thing intentionally. It’s just the moment. The referee and the supervisor do the right thing, but it is not easy.”

Djokovic is not the first player to be defaulted in similar circumstances, but for it to happen at a grand slam and as the tournament favourite is an extraordinary situation.

Tim Henman was disqualified from Wimbledon 25 years ago for hitting a ball girl with a ball during a doubles match while David Nalbandian kicked an advertising hoarding during the Queen’s final in 2012, injuring a line judge, and was defaulted.

Speaking on Amazon Prime, Henman said: “It’s a massive shock. There’s no doubt it’s the right decision. It’s amazing for me to talk about this because it happened to me at Wimbledon in 1995. It was that moment of frustration, hit the ball away when I wasn’t looking and I hit a ball girl in the ear.”

Djokovic will forfeit his prize money and ranking points, and will face a further fine for leaving the site immediately rather than explain himself in a press conference.

That decision earned strong criticism from Henman, who said: “There’s no doubt he’s made a mistake, which was an accident on the court.

“Unfortunately he’s compounded the error because he needs to face up to it, apologise and accept that he made a mistake. By then, in essence, running away from it, it’s going to go on longer.”

It is a remarkable end to a contentious summer for Djokovic, who earned criticism from inside and outside tennis when the exhibition Adria Tour he organised in the Balkans resulted in several players and coaches, including Djokovic, testing positive for Covid-19.

On the eve of the US Open, meanwhile, Djokovic left his role as head of the ATP Player Council to set up a rival player organisation.

His biggest critic among his fellow players has been Nick Kyrgios, who weighed in from Australia.

He wrote on Twitter: “Swap me for jokers incident. ‘Accidentally hitting the ball kid in the throat’ how many years would I be banned for?”

Djokovic’s disqualification means that, for the first time since Marin Cilic’s US Open win in 2014, there will be a new men’s grand slam champion.

Fifth seed Alexander Zverev, who eased into the last eight with a 6-2 6-2 6-1 victory over Alejandro Davidovich Fokina, said: “It’s very unfortunate that he hit the line judge, and especially where it hit her.

“There is a rule in place for it. I think the supervisors and all of them are just doing their job. But very unlucky for Novak. I’m a little bit in shock right now.”

Zverev becomes one of the leading contenders and he said: “Now I think is the time where it gets really interesting. I know who I can play. I know who the rest of the guys can play. We’ll see where we go from here.”