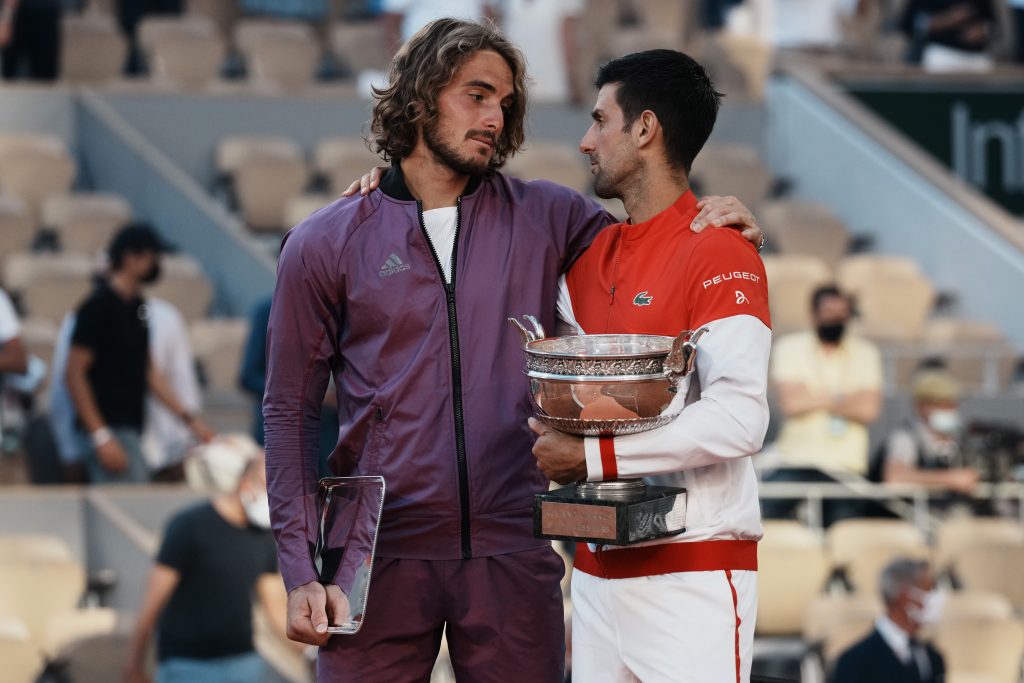 Novak Djokovic set his sights on the Golden Slam after rewriting the history books again at the French Open.

He is now only a single title behind Roger Federer and Rafael Nadal in the all-time list and could even overtake them this year given he will be the favourite at both Wimbledon and the US Open.

Were he to win Olympic gold as well in Tokyo, he would be the first man to claim the five titles in one year and only the second player after Steffi Graf in 1988.

Djokovic said: “Everything is possible. Definitely in my case, I can say that what I’ve been through in my career, in my life, this journey has been terrific so far. I’ve achieved some things that a lot of people thought it would be not possible for me to achieve.

“I did put myself in a good position to go for the Golden Slam. But I was in this position in 2016 as well. It ended up in a third-round loss in Wimbledon.

“So obviously I will enjoy this win and then think about Wimbledon in a few days’ time. I don’t have an issue to say that I’m going for the title in Wimbledon. Of course I am.

A defining moment in tennis history.@DjokerNole is the first man in the Open Era to win all four majors twice! #RolandGarros pic.twitter.com/2kpFoVwyUR

“Hopefully I can use this confidence that I have right now (to take) into Wimbledon, as well. Then let’s take it from there.”

It appeared Djokovic had passed the big test by handing Rafael Nadal just his third defeat at Roland Garros on Friday, but the effort it took to achieve that seemed to weigh heavily in the world number one’s arms and legs.

Tsitsipas saved a set point to win a compelling opener on a tie-break and looked to be cruising towards the title in his first final when he comfortably took the second, but Djokovic showed once again why he can never be written off, willing himself to victory.

“I am thrilled and I’m very proud of this achievement,” he said. “I think (to be) part of the history of the sport that I love with all my heart is always something that is very inspiring and very fulfilling for me.

“I couldn’t be happier and more satisfied with this kind of scenario in the last 48 hours. Probably ranks in the top three all-time achievements and experiences that I had in my professional tennis career.”

The turning point came at the start of the third set after Djokovic took a bathroom break, as he had when he was two sets down to Lorenzo Musetti in the fourth round.

The 34-year-old said: “There’s always two voices inside: there is one telling you that you can’t do it, that it’s done, it’s finished. That voice was pretty strong after that second set. So I felt that that was a time for me to actually vocalise the other voice and try to suppress the first one that was saying I can’t make it.

“I told myself I can do it, encouraged myself. I strongly started to repeat that inside of my mind, tried to live it with my entire being.

“Once I started playing in that third set, especially in the first few games, I saw where my game is at, it kind of supported that second voice that was more positive, more encouraging. After that there was not much of a doubt for me.”

Djokovic began to play with more conviction and precision and broke at the fifth time of asking to make it 3-1.

From then on he was always in the ascendancy and, although Tsitsipas roused himself for a final effort in the fifth set, it was Djokovic who claimed the Coupe des Mousquetaires.

Djokovic, Nadal and Roger Federer have guarded the Slams like a fiefdom, repelling one generation after the next. There is no doubt Tsitsipas’ generation are getting closer but, even in their mid and late thirties, the big three still refuse to allow their fingers to be prised off the biggest trophies.

Djokovic had never successfully come back from two sets down in a Grand Slam final but, having lost in the final four times in Paris, including last year to Nadal, he was determined not to let another chance slip away.

It was a bittersweet fortnight for Tsitsipas, who made a breakthrough by reaching his first final but still came up just short.

“It’s very unfortunate, very sad in the same way because it was a good opportunity,” he said. “I was playing good. I was feeling good. I lost an opportunity to do something better today.

“Despite my loss today, I have faith in my game. I very much believe I can get to that point very soon. I was close today. Every opponent is difficult. There’s a small difference between the player I played today and the ones from before.

“But I think with the same attitude and, if I don’t downgrade myself, I see no reason for me not to be holding that trophy one day.”