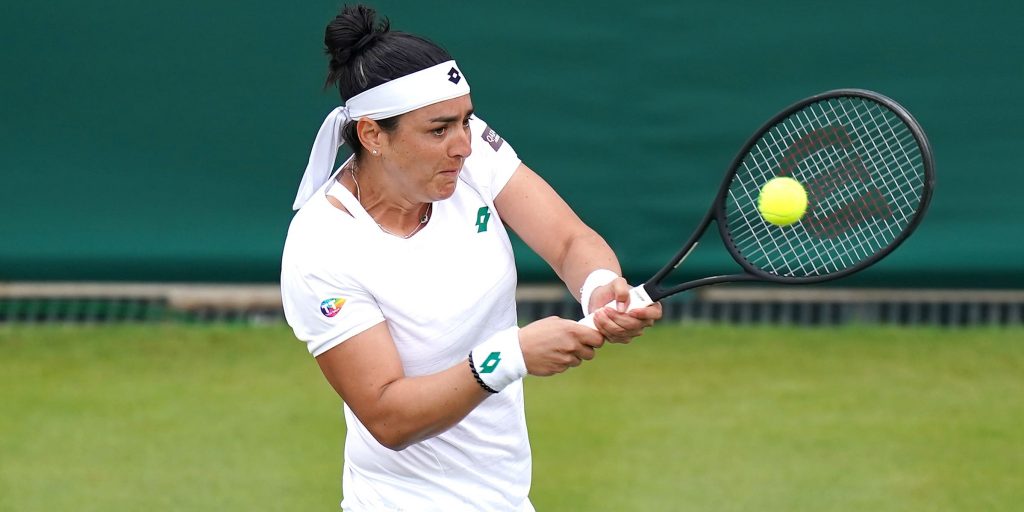 Ons Jabeur set her sights on reaching the Wimbledon final after coming from a set down to defeat seventh seed Iga Swiatek and continue her brilliant run at the All England Club.

The Tunisian, who became the first Arab woman to win a WTA title in Birmingham last month, had already knocked out former champions Venus Williams and Garbine Muguruza and a 5-7, 6-1, 6-1 victory saw seventh seed Swiatek added to the list.

The Pole, last year’s French Open champion, became the seventh top-10 seed to fall after being outfoxed by the variety and skill of Jabeur.

Just one of the many world-class plays from @Ons_Jabeur 💫#Wimbledon pic.twitter.com/7pNbFOhvOs

Jabeur said: “I’ve been going to the second week almost every Grand Slam right now, being more consistent. My goal is to break this quarter-final and be able to go to the semi, and why not the final? I’m enjoying my time here in Wimbledon, enjoying the grass a lot.”

Both women made nervous starts but especially Swiatek, who trailed 3-1 and 5-3 before fighting back to win the first set, emulating Jabeur against Muguruza by hitting a winner around the net post in the 11th game.

But Jabeur hit back strongly, finding her touch on her favoured drop shots but mixing them with fiercely-struck forehands to keep Swiatek guessing.

Ultimately, the 20-year-old had no answer, and Jabeur, who next faces big-hitting second seed Aryna Sabalenka, matched her run at the Australian Open last year by making it through to the quarter-finals.

“It was very close from the beginning,” said Jabeur. “I knew I had the rhythm. She played really well. She deserved to break me and take the serve. That’s why I stayed calm. I didn’t think anger would be the answer right that second.

“I knew I had to be aggressive. I didn’t do a lot of drop shots today, just felt like doing slices and being more aggressive was the key here to win.”

Swiatek won the junior title at Wimbledon three years ago but admits she is not yet comfortable on grass.

The Pole said: “Ons was really relaxed in the second set, because maybe she felt like she has nothing to lose. She’s playing a great tournament.

“She’s just playing really intelligent tennis. When she’s in and when she gets the ball right, she can play anything. So it was pretty tough.

“This grass season is really a positive for me and it gave me a lot. I hope I’m going to use that in future years.”