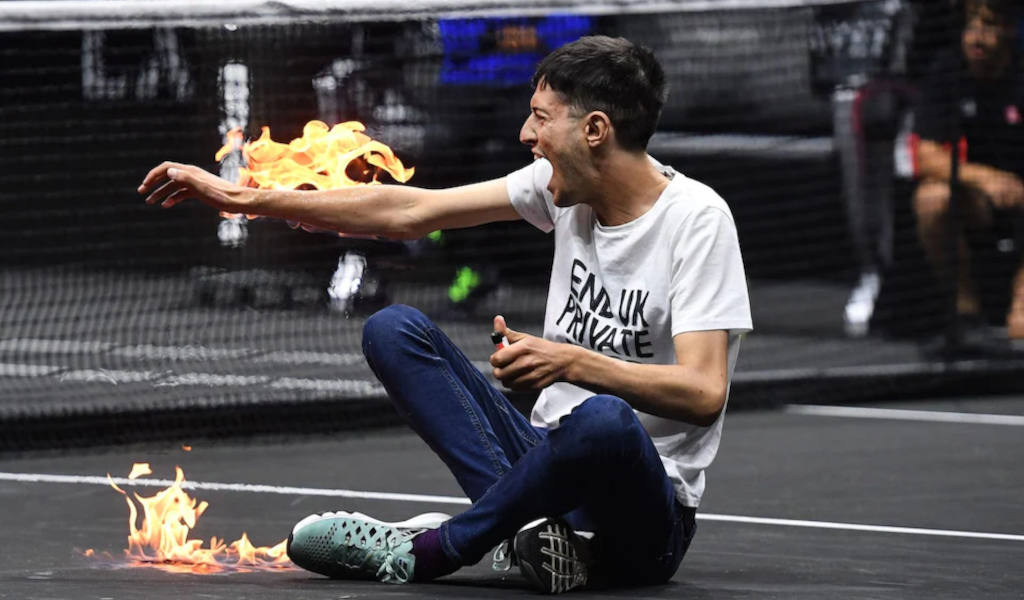 A protester set fire to his arm during the opening session of this year’s Laver Cup at the O2 in London.

The incident happened during the match between Stefanos Tsitsipas and Diego Schwartzman on the first day of the competition.

Tsitsipas clinched the first set 6-2 and during the changeover a man ran on to the court and lit a fire, which briefly set his arm ablaze.

The individual was wearing a t-shirt which read: “End UK Private Jets” and was quickly dragged out of the court after the fire had been extinguished.

After a brief delay, the match, the second of day one, was able to resume.

Earlier Casper Ruud had won the opening match of the Laver Cup after seeing off a Jack Sock fightback.

Ruud expected that the first day of the Laver Cup would be an emotional affair.

He said: “It’s going to be very emotional in a couple of hours in this area.

“It’s been all laughs so far but I’m sure there will be some tears when Roger steps off the court for the last time.

“One of the greatest athletes of all time, no matter the sport. I feel very lucky to be in the arena to witness it very close and I’m sure people with tickets tonight will probably have some of the best times of their life.”

Europe forged ahead thanks to an accomplished display from Stefanos Tsitsipas who beat Diego Schwartzman in straight sets.

“I knew I was dealing with a serious opponent. Diego is someone that gets back to every ball. It was more of a physical challenge than anything else,” said Tsitsipas.

“I’m glad with the way I approached my tactics and I was very patient today which helped. I was not rushing when things didn’t go as well in the second set, but I kept my composure and kept on going.

“It’s important the attitude that I put inside the court in combination with my team-mates that were always fist pumping me and giving me their best energy.

“So that is definitely something that contributed to a good result today and I was able to play with a lot of intensity and never let go.”

The disruption caused by the protester didn’t throw off Tsitsipas who powered through to victory.

London’s O2 Arena will later play host to Roger Federer’s final match but before that Andy Murray will take on Alex di Minaur with a chance to make it three from three for Team Europe.