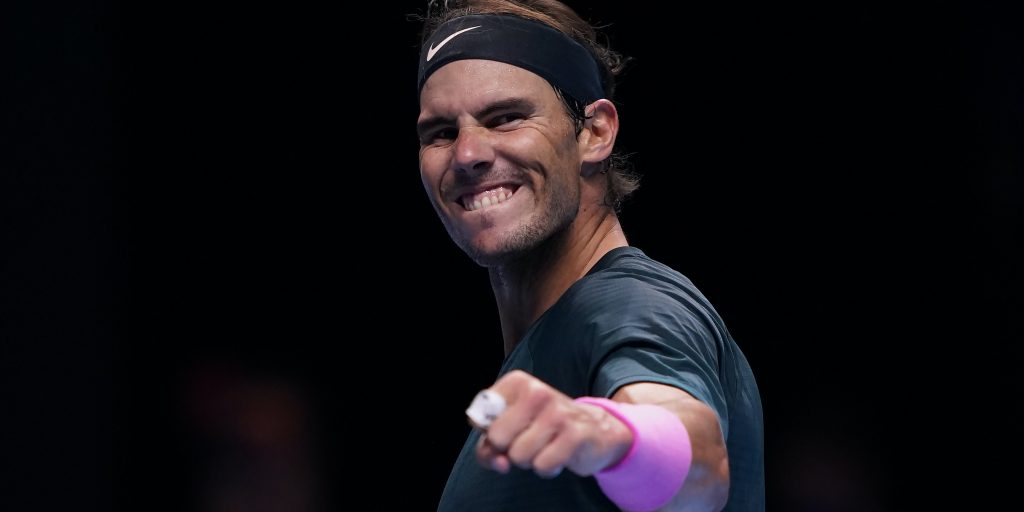 Rafael Nadal will face Daniil Medvedev in the semi-finals of the Nitto ATP Finals after ending the title defence of Stefanos Tsitsipas at The O2.

It was a winner-takes-all clash after both men lost to Dominic Thiem, but Nadal was upbeat about his level following his narrow defeat to the Austrian on Tuesday and showed here that optimism was justified with a 6-4 4-6 6-2 victory.

Nadal served superbly up until an untimely double fault saw Tsitsipas pinch the second set but the Spaniard, who has never won this title, responded well to reach the knockout stages for the sixth time overall and first since 2015.

Speaking in his on-court interview, Nadal said: “I think I played quite well for such a long time. A bad game in 5-4 of the second affected it a little bit. I was winning my serve quite comfortable until that moment.

“After that, everything changed a little bit. I think I started to serve a little bit worse, but in general terms it has been a very positive match for me

“To be in the semi-finals here in the last tournament of the year is an important thing. I’m happy for that and I’m looking forward to that semi-final against Daniil.”

Tsitsipas’ record against Nadal now stands at 1-6, with his only victory coming, somewhat unexpectedly, on clay in Madrid last spring.

This was the second year in a row that Nadal and Tsitsipas faced off in the final group match, with the world number two winning on that occasion but missing out on the last four to the Greek and Alexander Zverev.

Tsitsipas was unhappy with his performance in the third set, saying: “I fought very hard in the second set and played with the right intentions, which gave me lots of opportunities.

“I’m quite disappointed with the third one. It didn’t go as planned. I was rushing, I don’t even know what I was trying to do, I was trying to be way, way too much aggressive. I should have handled it a little bit more clever and patiently.”

The 22-year-old will not be sorry to see the back, at least for a few weeks, of the strict bubble in which tennis players have been living since the resumption of the tour in August.

He said: “To me it’s felt very dark. I’m not a person who sees the dark side of things but this whole thing was very difficult to handle and I’m very happy that I didn’t break down.”

Earlier, Andrey Rublev claimed his first victory at the tournament in his dead-rubber clash with Thiem, winning 6-2 7-5.

Thiem admitted he was a step short, saying: “Obviously I wanted to win the match 100 per cent but the first two matches were pretty tough, pretty long. So, of course, with the fact that I was already qualified in the back of my mind, it was maybe difficult today to keep that intensity alive.”

The third seed will face the winner of Friday’s clash between Novak Djokovic and Alexander Zverev in the last four.

He said: “Both are former champions of this tournament. For me just the goal is to find the great intensity tomorrow in practice and try to be 100 per cent in the match on Saturday whoever I face.”

Britain’s Joe Salisbury reached the semi-finals of the doubles at The O2 for the first time with American Rajeev Ram after they won a tense contest against French Open champions Kevin Krawietz and Andreas Mies 7-6 (5) 6-7 (4) 10-4.

Salisbury and Ram still have high hopes of finishing the year as the world’s number one team, and the Londoner said: “Obviously we want to keep going. Two more matches to win.”

Meanwhile, Jamie Murray is to reunite with his former doubles partner Bruno Soares next season.

The pair split last spring, with Murray choosing to switch to fellow Briton Neal Skupski, but he is returning to the player with whom he won the Australian Open and US Open in 2016.

Murray has failed to hit the same heights with Skupski, although they did reach the semi-finals of the US Open last year and were agonisingly close to qualifying for the O2 this time around.

Salisbury said: “I think it was kind of a mutual decision where they felt like they could be doing slightly better elsewhere. Maybe the fact they didn’t make it here was kind of the catalyst for that.”