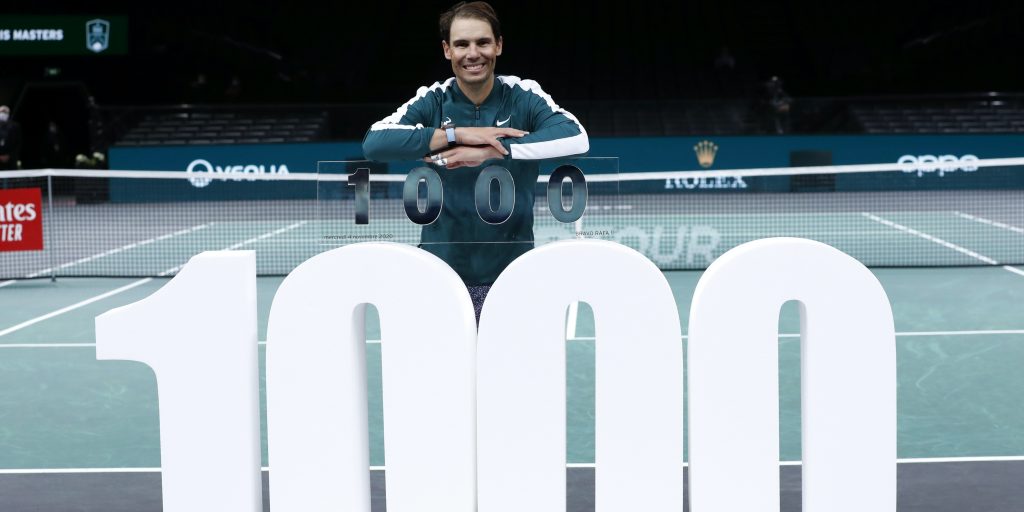 Top seed Rafael Nadal came from behind to beat Feliciano Lopez and move into the third round of the Rolex Paris Masters with his 1,000th singles ATP Tour victory.

Spaniard Nadal, playing for the first time since his French Open triumph, fought back to defeat fellow countryman Lopez 4-6, 6-4, 6-2 in just over two-and-a-half hours on Wednesday.

The victory saw world number two Nadal, 34, becomes only the fourth player in the open era to pass the milestone – joining Jimmy Connors, Roger Federer and Ivan Lendl on the exclusive list.

Paris and Rafa. They just go together 👑#RolexParisMasters | @RafaelNadal pic.twitter.com/EhuCpSRLui

“To achieve that number is because I have been playing well for a lot of years and is something that makes me feel happy,” Nadal told reporters afterwards at a virtual press conference.

“I know it is a very special number, 1,000. Even if it’s not the same to celebrate something like this without a crowd, I enjoy it with ATP, with the president of the French (Tennis) Federation, Guy Forget, supervisor and the ball boys.

“I enjoy it and just can say thanks to all of them to make this moment a little bit more special.”

It was a ninth straight victory for the 23-year-old world number seven, who won the bett1HULKS Championships title in Cologne.

Zverev will next meet Adrian Mannarino for a place in the last eight, after the Frenchman battled past Yoshihito Nishioka 6-3, 6-7 (5-7), 6-3.

Russian Daniil Medvedev, the tournament’s number three seed, was leading 5-2 in the first-set tie-break when South Africa’s Kevin Anderson was forced to retire because of a right leg injury.

✌️ wins away from a spot in London…

Diego Schwartzman, aiming to clinch the last spot at the Nitto ATP Finals, also moved into round three with a 7-5 6-3 victory over Richard Gasquet.

Milos Raonic fired down 11 aces as he dispatched Frenchman Pierre-Hugues Herbert 6-4, 6-4 and the Canadian 10th seed will play America’s Marcos Giron in the third round.

Australian No16 seed Alex de Minaur beat Italian Lorenzo Sonego in straight sets, 6-3, 7-5, and will play Medvedev in round three.