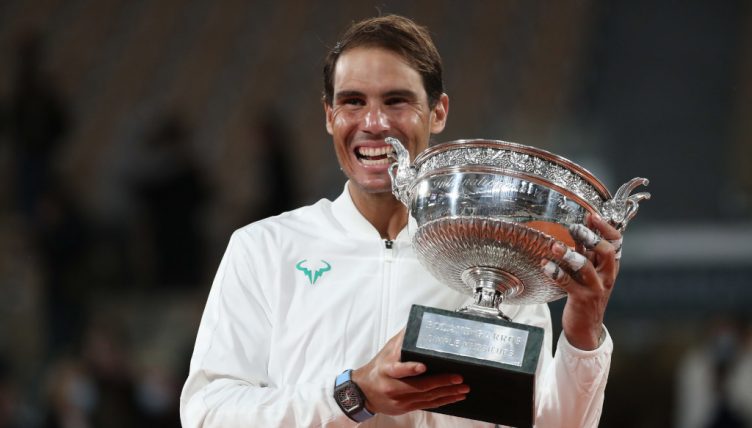 Rafael Nadal delivered a performance of the highest quality to obliterate Novak Djokovic in the French Open final to win a 13th title at Roland Garros and tie Roger Federer on 20 Grand Slam titles.

The runaway train that was Nadal dominated from start to finish as he produced one of the most clinical performances in a major final against the world No 1, winning 6-0, 6-2, 7-5 in two hours and 41 minutes.

It was not that Djokovic played badly, not in the beginning stages anyway, it was just Nadal was in a class of his own and brought this A-game on the red dirt.

The Spaniard made his intentions clear from the word go as he broke Djokovic in the first game and – although the Serb tried to throw everything at Nadal – including drop shots and great angled shots, there was no let up after that.

The world No 2 chased everything down, the luck went his way and he even correctly guessed which way Djokovic would send the overhead smashes.

And before Djokovic could really figure out what was going on, he had lost the first set 6-0 in 48 minutes.

There was finally some respite for the world No 1 at the start of the second set as he at last got on the scoreboard after saving three break points in the first game.

But he was soon 5-1 behind as Nadal stepped it up again with two consecutive breaks of serve. After another Djokovic hold, Nadal served it out to take a two-set to love lead.

Djokovic no doubt raised his level in the third set as the first four games went according to serve, but then Nadal broke to love in the fifth game to go 3-2 up.

There was a glimmer of hope for Djokovic in the sixth game as managed to eke out a couple of break points and, after Nadal saved the first one, the Serb finally got his first break of the match to draw level.

The world No 1 had certainly stepped up his game as he got some cheap points to hold two service games while also pushing Nadal a little harder on his serve.

However, his joy was short-lived as Nadal got the crucial break in game 11 as Djokovic threw down a double fault while 30-40 down. That was the match as Nadal held serve for his 100th French Open win in his 103rd match.

The win helped him to secure a 13th title at Roland Garros and a 20th Grand Slam, which saw him draw level with Federer for most Slams won.

For Djokovic it was only his second loss in 2020 following his default from the US Open in August while his Australian Open win at the start of the year leaves him three behind Nadal and Federer.