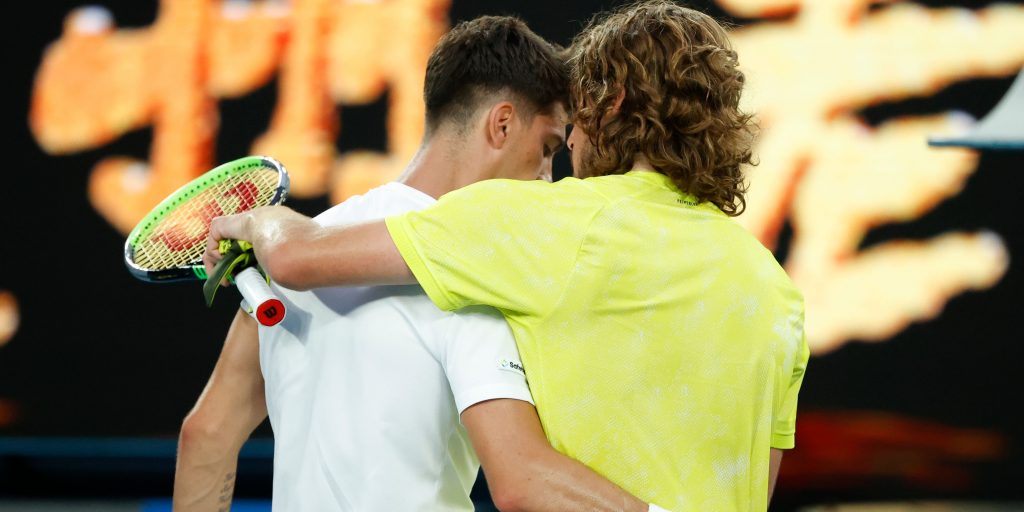 Thanasi Kokkinakis came up just short of another memorable victory after his Australian Open comeback was ended in five sets by Stefanos Tsitsipas.

Kokkinakis’ emotional opening-round win over South Korea’s Kwon Soon-woo on Tuesday night was his first victory in Melbourne since 2015 following a series of injuries and illnesses that threatened to destroy his career.

The Australians have been providing the high drama at their home Grand Slam, an event otherwise relatively low on thrills, low on crowds, and with players low on fitness following quarantine.

Nick Kyrgios got the party started on Wednesday night with his rollercoaster five-set win over Ugo Humbert and he was in the stands to support his good friend and doubles partner Kokkinakis.

The 24-year-old wild card took the first set against world number six Tsitsipas after a tie-break and, like Kyrgios 24 hours earlier, saved a match point in the fourth.

We’re already counting down until we meet again.#AO2021 | #AusOpen pic.twitter.com/x1HQ4EBF40

“I just want an ice bath right now,” said Tsitsipas on court afterwards. “Thanasi is a great competitor and a great fighter. It was very difficult facing him today. He’s a talent with huge potential.

“Thanasi wasn’t able to play all these years and we were losing someone who was not on the tour so I’m happy to see him back competing at this level.”

Elsewhere in the men’s draw, Russian seventh seed Andrey Rublev reached the third round with a straight-sets victory over Thiago Monteiro.