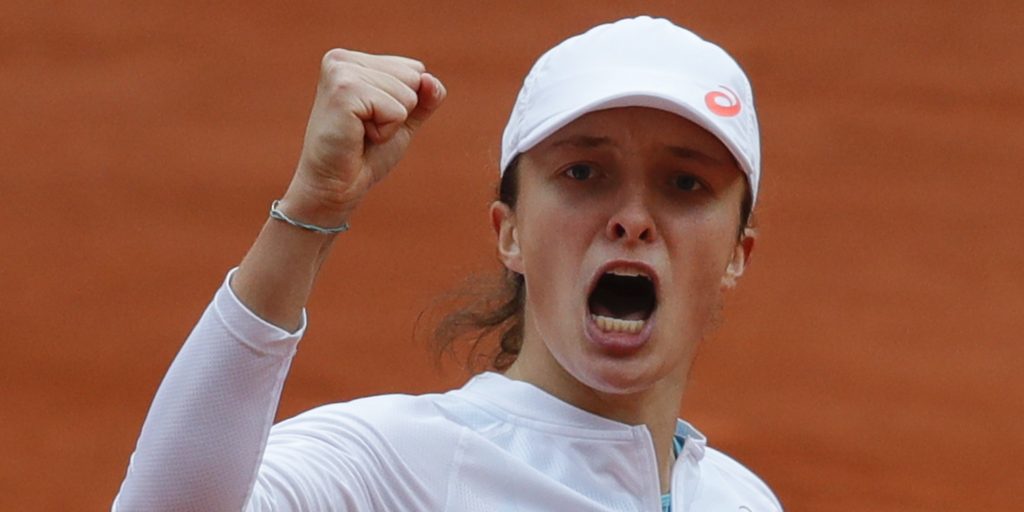 Two of the biggest young talents in women’s tennis will clash for the French Open title on Saturday when Sofia Kenin takes on Iga Swiatek.

Australian Open champion Kenin has the chance to claim her second grand slam title of the year after beating Petra Kvitova 6-4, 7-5 while Swiatek continued a brilliant breakthrough tournament by racing past surprise package Nadia Podoroska 6-2, 6-1.

The 19-year-old Pole has lost just 23 games in six matches and, after swatting aside top seed Simona Halep in the fourth round, has also handled the mantle of favourite with aplomb.

Welcome to the final 👏

19-year-old @iga_swiatek dominates Podoroska 6-2 6-1 to become the first 🇵🇱 woman in the Open Era to reach the title match in Paris.#RolandGarros pic.twitter.com/48CIv1C8vO

Swiatek travels with a psychologist and said: “I’m dealing with my nerves pretty good. I feel like I’ve been so efficient and so focused for whole matches that I put a lot of pressure on my opponents.

“I’m not even nervous in second sets because I know it’s going to probably go my way.

“It’s easy to say that you’re not going to think that you’re playing a semi-final, but it is somewhere in the back of your head. The thing is you don’t have to focus on that thought, you just have to let it go and focus on the things that are really making a difference, like technique or tactics.

“On one hand I know that I can play great tennis. On the other hand, it’s kind of surprising for me. I never would have thought that I’m going to be in the final. It’s crazy. I just kept believing in myself. It’s like a dream come true.”

Whoever wins on Saturday will continue a series of grand slam victories for young players, with Halep the only player over the age of 23 among the winners of the last seven titles.

Indeed, Swiatek and Kenin’s only previous meeting came in the junior event at Roland Garros four years ago, when the Pole won in two tight sets.

Kenin said: “I remember I lost. I don’t remember how I played. But definitely I can say I was not as comfortable on clay as I am now, as I started to feel last year.

“Of course, we’re both different players now. I have to figure out what she does. She’s had a great two weeks here. She’s had some great results, playing some really good tennis. I know that I’m also playing well. I’m just going to enjoy myself today, and then tomorrow I’m going to prepare for Saturday.”

🤯There are no words so I’ll just leave it here. FINAL!!!

Swiatek has not even fully committed to professional tennis, saying earlier in the tournament that she was still weighing up whether to go to university.

“Right now it’s going to be hard to make a decision to go back to studying because I feel like really I can achieve big things,” said the teenager.

“I just want to focus on that. But really I’m only 19, so a lot can change during a few years. We’re going to see. Maybe I’m going to be hungry for knowledge.”

At 131, Podoroska was the lowest-ranked female player to reach the semi-finals of the French Open but Swiatek’s superior court craft was immediately obvious.

Kenin you believe it!?

Kenin, too, played a very smart match to defeat Kvitova in windy conditions at Roland Garros.

The American withstood a first-set fightback and then overcame a wobble when she failed to serve out the match at 5-3 by showing terrific tenacity.

Kenin will try to become the first woman since Angelique Kerber in 2016 to win two Slam titles in the same season.

The 21-year-old, who began her clay-court season by failing to win a single game against Victoria Azarenka in Rome, said: “I feel like after Australia people started to know me. I felt a little more pressure from the outside.

“Keeping this level and playing some great tennis now is really special. I feel like people definitely respect me and I’m happy. I’m going to keep it that way.”