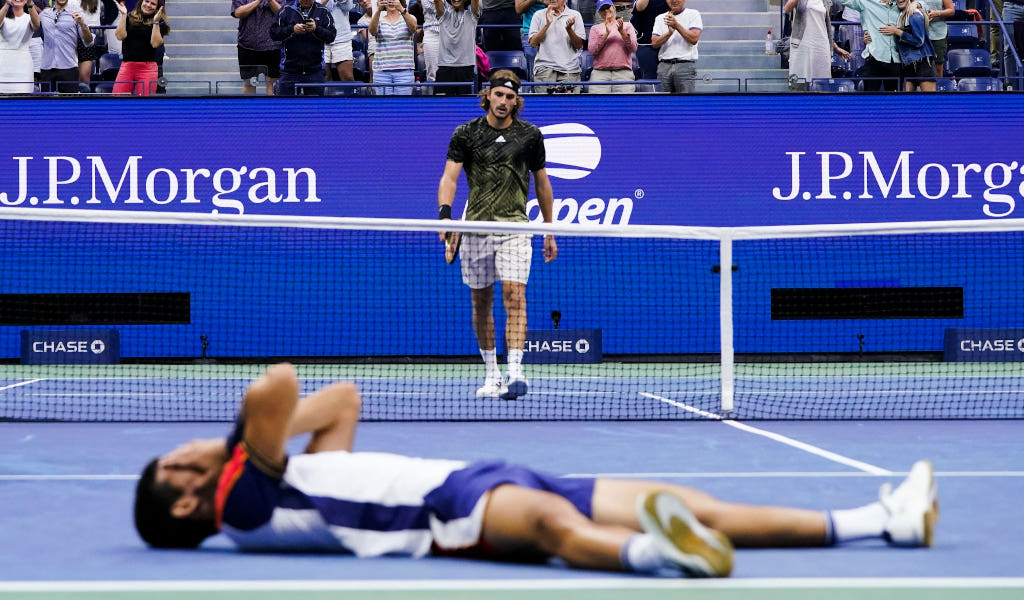 It was a dramatic day at Flushing Meadows as Stefanos Tsitsipas and Naomi Osaka crashed out while Dan Evans reached the US Open fourth round for the first time in his career.

It was the day of 18-year-olds on Arthur Ashe as 2021 villain Tsitsipas lost in five sets to rising star Carlos Alcaraz and then Leylah Fernandez stunned women’s defending champion Osaka.

Here, we look back at day five in New York.

It’s a party in Armstrong! pic.twitter.com/jGUWFXmTSI

What a day to be 18 & on Arthur Ashe Stadium. #USOpen pic.twitter.com/hcMQnIedfx

What a day for the 18-year-olds. After rising Spanish star Alcaraz downed men’s third seed Tsitsipas in a five-set battle, a win he described as a “dream come true”, Fernandez followed suit by wiping out defending women’s champion Osaka. The Japanese was serving for the match in the second set but an incredible performance from the Canadian teenager saw her produce the shock of the tournament.

US Open ticket sales must be strugglin this year 🙄 10k for a pink bag, at least it looked fly 💸👛 #Corporate https://t.co/Fj1aoFSCtL pic.twitter.com/yDXOxhOLX3

There are fines for smashing the racket, swearing on court and failing to attend a press conference. And then there are fines for bringing an “unapproved” pink bag on to court. Big-serving American Reilly Opelka is now 10,000 US dollars (GBP 7,212) worse off after his accessory showed a sponsor’s logo that was too big.

Svitolina revealed she enjoys some marital competitiveness with new husband Gael Monfils as she booked her place in the fourth round.

See you in Torino 👋

Britain’s Joe Salisbury and his American partner Rajeev Ram had two reasons to celebrate on Friday after reaching the third round at Flushing Meadows and qualifying for the ATP Finals later this year.

Evans could have been excused for thinking that second weeks of grand slams were just not for him. The British number one has lost in the third round at the four major tournaments six times and three since his only fourth round appearance at the Australian Open in 2017. And at two sets down against Australian Popyrin, the 31-year-old must have been thinking the worst, but a fine comeback some him register a 4-6, 3-6, 6-3, 6-4, 7-6 (7-1) success.

Emma Raducanu continues her amazing US Open journey and hopes to join Evans in the fourth round as she takes on Spaniard Sara Sorribes Tormo.

The 18-year-old has been one of the big story of this year’s tournament, but is still denied a showcourt billing as she is second up on Court 7.