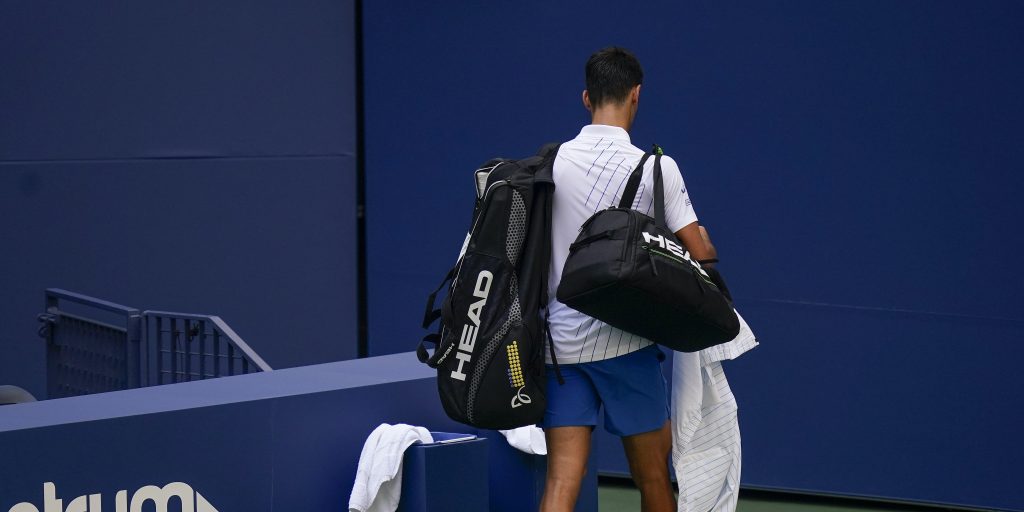 Our look back at day seven of the US Open features Novak Djokovic’s sensational disqualification from the US Open on Sunday night.

Djokovic hit a line judge with a ball and was thrown out of the tournament, but women’s number two seed Naomi Osaka enjoyed a much more stress-free outing as she booked her place in the last eight.

This whole situation has left me really sad and empty. I checked on the lines person and the tournament told me that thank God she is feeling ok. I‘m extremely sorry to have caused her such stress. So unintended. So wrong. I’m not disclosing her name to respect her privacy. As for the disqualification, I need to go back within and work on my disappointment and turn this all into a lesson for my growth and evolution as a player and human being. I apologize to the @usopen tournament and everyone associated for my behavior. I’m very grateful to my team and family for being my rock support, and my fans for always being there with me. Thank you and I’m so sorry. Cela ova situacija me čini zaista tužnim i praznim. Proverio sam kako se oseća linijski sudija, i prema informacijama koje sam dobio, oseća se dobro, hvala Bogu. Njeno ime ne mogu da otkrijem zbog očuvanja njene privatnosti. Jako mi je žao što sam joj naneo takav stres. Nije bilo namerno. Bilo je pogrešno. Želim da ovo neprijatno iskustvo, diskvalifikaciju sa turnira, pretvorim u važnu životnu lekciju, kako bih nastavio da rastem i razvijam se kao čovek, ali i teniser. Izvinjavam se organizatorima US Opena. Veoma sam zahvalan svom timu i porodici što mi pružaju snažnu podršku, kao i mojim navijačima jer su uvek uz mene. Hvala vam i žao mi je. Bio je ovo težak dan za sve.

The stunning turn of events on Arthur Ashe Stadium where Djokovic’s hopes of winning an 18th Grand Slam went up in smoke is not only the biggest shock of the day, but the biggest in the sport for years.

The world No 1 had just been broken in the first set by Pablo Carreno Busta and hit a ball out of annoyance that hit a line judge at the back of the court in the throat. After a lengthy discussion with tournament officials Djokovic, despite his strong pleas, was thrown out of the tournament.

The 🇨🇦 does it!

As well as Carreno Busta, Alexander Zverev, Denis Shapovalov and Borna Coric must all be inwardly thrilled at Djokovic’s demise as it opens up their half of the draw and one of those four men will now make a Grand Slam final for the first time. Carreno Busta and Zverev meet in the last eight and Zverev takes on Coric with the prospect of possible glory in their sights.

The American presence in the women’s game is strong at the moment, but two lesser known names booked their place in the quarter-finals.

Jennifer Brady saw off former champion Angelique Kerber to reach the last eight at a Grand Slam for the first time. Shelby Rogers then booked her first-ever US Open quarter-final spot by saving four match points to beat Petra Kvitova.

Serena Williams and Sofia Kenin could ensure that half of the remaining eight women are American by winning on Monday.

this point was exhausting to WATCH 😅

Putintseva is closing in on the QFs. #USOpen pic.twitter.com/Cofp93xbgC

It was going to take something special to end this 28-shot rally and Yulia Putintseva came up with a delightful drop shot during her win over Petra Martic.

2020 #USOpen is first Grand Slam tournament without a former Grand Slam champion among its quarter-finalists since 2003 @Wimbledon (Won by @RogerFederer).

This is first @USOpen without a former US Open champion among its quarter-finalists since 1997 (Won by Patrick Rafter).

Djokovic’s exit means that there will be no former Grand Slam champions in the last eight for the first time at any Slam since 2003 Wimbledon.

Dominic Thiem could not have enjoyed a better day off, seeing his main obstacle to a maiden Grand Slam be disqualified, but the number two seed faces his toughest test yet when he faces Felix Auger-Aliassme in the afternoon match on Arthur Ashe Stadium.

Serena Williams opens proceedings on that court with her fourth round match with Maria Sakkari. Jamie Murray comes up against his former partner Bruno Soares in the men’s doubles quarter-final.