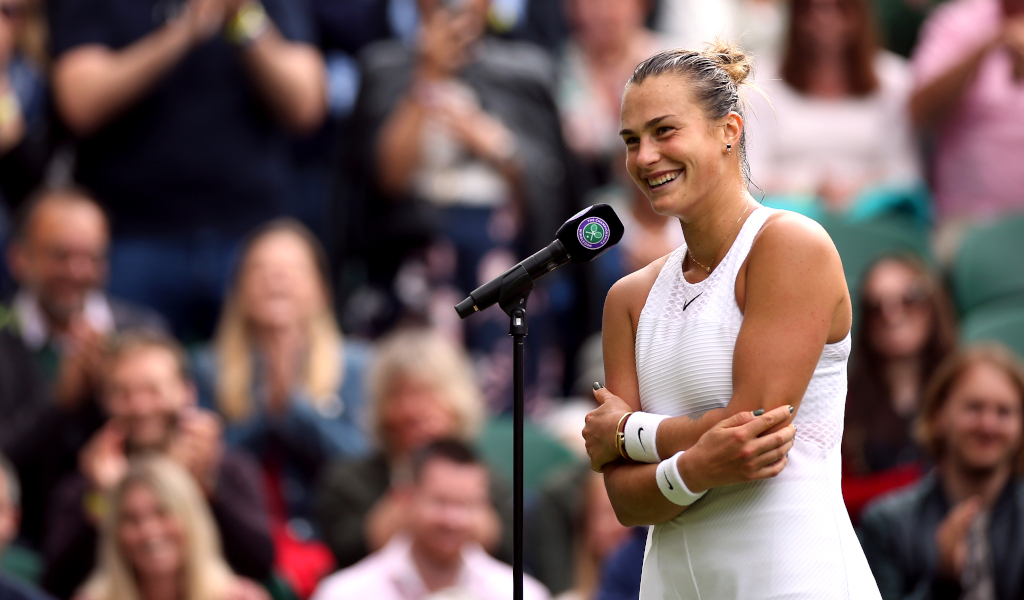 World No 4 Aryna Sabalenka is refusing to let herself dream of a maiden grand slam title despite reaching the Wimbledon fourth round for the first time with a 6-0, 6-3 win over Maria Camila Osorio Serrano.

The Belarusian needed one hour and 15 minutes to secure a third triumph at the All England Club this summer and will take on 18th seed Elena Rybakina in the last 16.

With Naomi Osaka and defending champion Simona Halep not involved in the tournament and Serena Williams and Elina Svitolina early casualties, the No 2 seed is firmly in contention for the trophy but has never made the quarter-finals of a major before.

The pursuit of a maiden Grand Slam singles title continues…

No. 2 seed @SabalenkaA seals an impressive 6-0, 6-3 win over Maria Camila Osorio Serrano to progress to the fourth round#Wimbledon pic.twitter.com/xrGxlMqa8x

“Wimbledon is a special place and a special surface. It is a special atmosphere here and I enjoy like nowhere else,” Sabalenka said after hitting 22 winners and earning six breaks against her opponent.

“When I was growing up, I was dreaming to win a Grand Slam and it doesn’t matter which one it will be.

“Of course it is something special to win Wimbledon but I don’t want to look that far because it is just the fourth round. I just want to focus on each match and try to do my best.”

Sabalenka had to overcome Great Britain’s Katie Boulter as well as a buoyant Centre Court crowd in the second round and has stuck to the task with impressive nerve during the first week.

Even though she only dropped three games against Osorio Serrano, the Colombian had 10 break points only for the 23-year-old to be able to use her experience to ensure only two were taken.

And when opportunities presented themselves on the teenager’s serve, Sabalenka, who had only one win at the Championships before this year, was clinical with six secured on Court Two where those in attendance were again backing the underdog.

She added: “Well, the score was 6-0 in the first set but it wasn’t that easy because every game we were not playing 40-0.

“It was deuce and advantage for her. She had a lot of break points and I saved it. It was a tough first set and second set also, so not an easy game against her but really happy to win this match.”

Tougher challenges lie ahead for Sabalenka but the Minsk-born ace is growing into a tournament where seeds have dropped like flies.

Osorio Serrano knocked 32nd seed Ekaterina Alexandrova out on Wednesday but her adventure at the All England Club is over.

The 19-year-old had needed to win three qualifiers to reach the main draw but did to continue a superb 2021 where she also made the first round at Roland Garros.

A lack of exposure to grass ensured Osorio Serrano went under the radar this year but that may not be the case next time after impressive victories in rounds one and two.

“I feel it has been a great tournament for me. I won five matches and it has been a really unreal week for me at Wimbledon,” the smiley 5ft 4in right-hander insisted.

“It was the best week of my life, actually. I am so happy with my performance on grass and yeah hopefully in the future I can be in the main draw again.

“I loved playing at Wimbledon and hopefully I can come many more times in the future.”