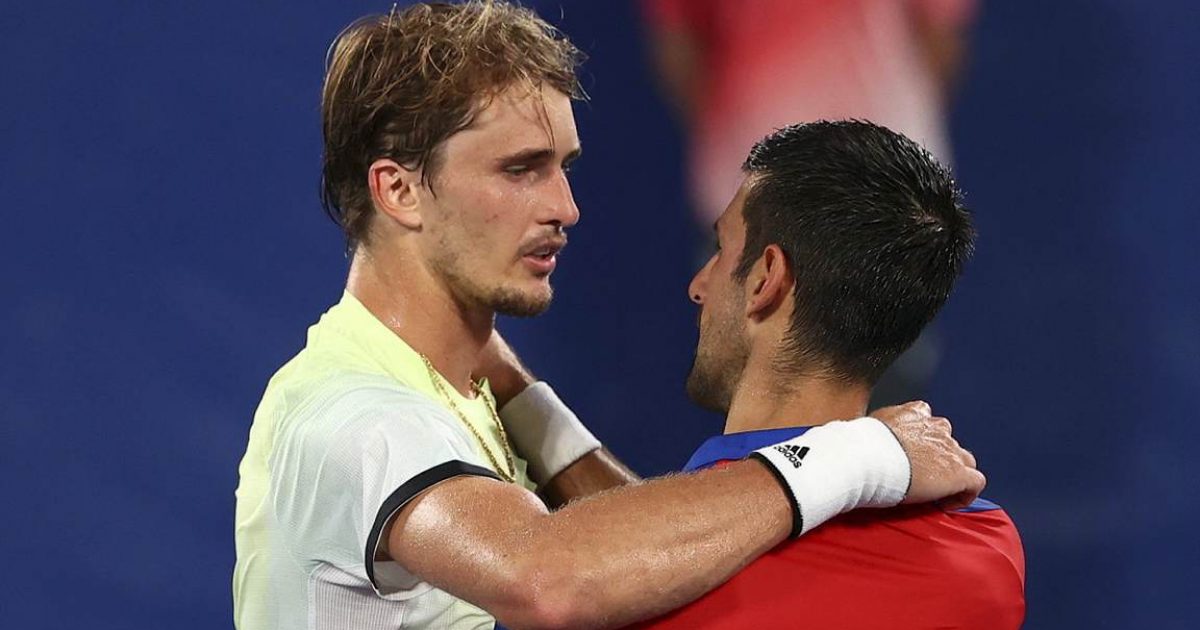 Novak Djokovic admitted he “felt terrible” as his dreams of an Olympic goal medal went up in smoke, with the social media reaction to his defeat against Alexander Zverev in Tokyo highlighting why he remains a polarising figure in the sport.

The world number one was looking to become the first man in history to win all four grand slam titles and Olympic singles gold in the same year but Alexander Zverev fought back brilliantly after losing the first set to win 1-6 6-3 6-1.

It is the third time Djokovic has lost in the semi-finals at the Olympics, with his only medal so far a bronze in Beijing in 2008.

Reminder: Novak Djokovic will enter the US Open attempting to become the first man to win the Grand Slam since 1969.

The 34-year-old still had a chance to win gold in mixed doubles with Nina Stojanovic but a miserable day was complete when they were beaten 7-6 (4) 7-5 by Russian Olympic Committee duo Aslan Karatsev and Elena Vesnina.

“I feel terrible,” said Djokovic, who refused to blame the incredibly humid conditions.

“It’s just sport. He played better. You’ve got to give him credit for turning the match around. He served extremely well. I was not getting too many looks at the second serve.

“My serve just drastically dropped. I didn’t get any free points from 3-2 up in the second. My game fell apart.”

Djokovic must try to rouse himself for two shots at a bronze medal on Saturday. He will face Spain’s Pablo Carreno Busta in the singles before he and Stojanovic take on Ashleigh Barty and John Peers of Australia.

Djokovic refused to comment on the state of his body, saying of his hopes of rousing himself for another big effort: “Let’s see. I feel terrible right now. Tomorrow hopefully fresh start, recover, and at least win one medal for my country.”

There were honest words from a great champion who has finally be halted in his march towards the history books, yet the exchanges on Twitter after the match confirmed Djokovic fans had taken this defeat badly.

Rising above the social media snipes from fans of Federer, Nadal and Djokovic, tennis legend Chris Evert was among those already looking forward to the US Open and Novak’s attempts to become the first male player to win a calendar Grand Slam since Rod Laver in 1969.

Well said! Will be rooting for him! https://t.co/CThiUeG1tf

Winning has become the norm for Djokovic in 2021, but he will be aware that victory at the US Open will ensure his place in tennis history is secure, despite his defeat in the Olympics.