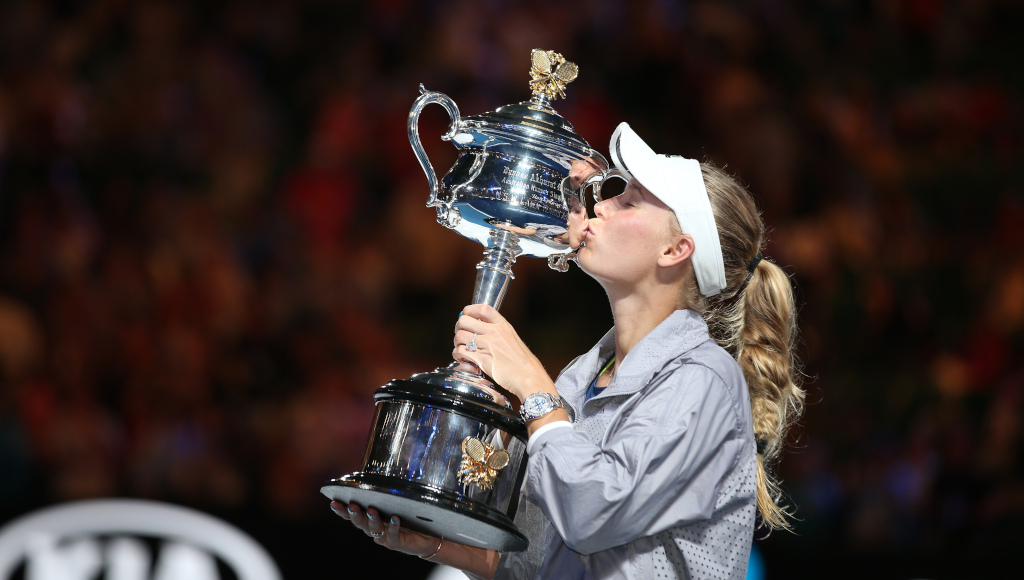 January 27, 2001 marks three years since former world No 1 Caroline Wozniacki beat Simona Halep in a thrilling Australian Open final to win what proved to be her first and only Grand Slam title.

In a pulsating contest on the Rod Laver Arena, Wozniacki prevailed 7-6 (7-2), 3-6, 6-4 in a match just shy of three hours to claim the Daphne Akhurst Memorial Cup after one of the best major finals in recent year

Not only did this final pit the top two players in the world against each other, with Halep world No 1 at the time and Wozniacki ranked second, it also guaranteed that one of them would finally break their Grand Slam duck.

Both had also saved match points to reach the final. Wozniacki saved two match points and came from 5-1 down to beat Jana Fett in the second round, whilst Halep had saved match points in thrilling third round and semi-final contests against Lauren Davis and former champion Angelique Kerber respectively.

Wozniacki started brightly in the final, racing out to 5-2 lead, and the Dane eventually closed out the opening set with a dominant tie-break despite failing to serve for it at 5-3.

Halep responded in the second set, with the Romanian saving early break points before breaking Wozniacki in the eighth game for a 5-3 lead. She saved three break points to serve the set out and force a decider.

A dramatic final set ensued with Wozniacki twice going a break up before Halep was able to break straight back, and when the top seed broke lead for 4-3 it seemed the title was going her way.

However, Wozniacki rallied and took the final three games, converting a first championship point on her opponent’s serve to seal an emotional victory after two hours and 49 minutes of intense action.

The Dane reclaimed the world No 1 ranking off Halep, having last been world No 1 six years before, though she would never reach another Grand Slam quarter-final.

Diagnosed with arthritis, Wozniacki’s ranking began to fall after a third-round loss to Maria Sharapova at Melbourne in 2019 when she was the defending champion and last year she bid farewell to tennis in Australia, retiring from the sport after a third-round defeat to Ons Jabeur.

After enduring yet another tight defeat in a Grand Slam final Halep would eventually capture her first Grand Slam title later that year at the French Open, beating Sloane Stephens in another three-set final. She added to that success by winning Wimbledon in 2019.