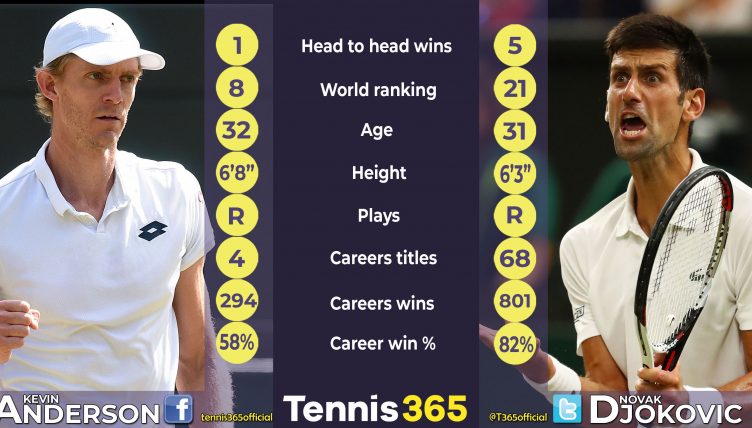 We preview the Wimbledon men’s singles final and give you everything you need to know ahead of Kevin Anderson’s clash with Novak Djokovic.

Recent form
After a tough start to the season after injury, Novak Djokovic has been quietly finding his best form for a while now.

He reached the semi-finals of the Rome Open in May before reaching the last eight of the French Open.

He went one better at Queens last month, reaching the final before having his run ended by Marin Cilic.

Kevin Anderson came into Wimbledon on the back of some very unremarkable form.

His year started well with finals in New York and Acapulco, but his form has really faded since with a Madrid Masters semi-final a rare highlight.

Head-to-head
Djokovic has, without a doubt, had the best of the past meetings between the players.

In fact, Anderson hasn’t won a match against the Serb since their very first meeting in 2008.

On that occasion, Anderson won in three sets at the Miami Open in the round of 64, but it’s been all Djokovic since.

Anderson will, however, be encouraged by the fact that Djokovic needed the full five sets to beat him the last time they met, which was in SW19 three years ago.

“Along the way, there were many small breakthroughs – making top 10 in 2015, beating Andy Murray in the round of 16 at the US Open, almost beating Novak here, being up two sets to love, losing very close in the fifth set.

“Then getting injured in 2016 was tough. I mean, I think the biggest thing as I try to sort of say, I don’t feel like there’s massive secrets. I work really hard. I have good goals.

“I’m always looking to improve. I’ve got a great team behind me. I have a lot of support. I feel like, as I’ve been saying, some of my best tennis I feel is still ahead of me.”

Novak Djokovic: “I’m just going through things, flash backs the last 15 months and everything I’ve been through to get here to get to the finals and beat the best player in the world in one of the longest matches I’ve played. I’m overwhelmed.

“Hopefully we can first of all play, both of us,’ he smiled. ‘He had a day off which means a lot. I wish I could have one. ‘I’m in the finals of Wimbledon, it’s an incredible achievement for me considering what I’ve been through.”

Betting
Djokovic is the overwhelming favourite with all the bookies and with good reason. He’s been there and done it before, 12 times before, while Anderson hasn’t.

Much has been made of Anderson’s gruelling journey to the final after two five-set epics in the previous two rounds, but you can take that one of two ways.

Either he’s a proven warrior in peak physical shape, capable of grinding out a result over five sets and Bet365’s 11/1 on a 3-2 Anderson win is great value. Or his legs have had too much taken out of him and the 5/2 they offer for a 3-1 Djokovic win is a great way to lengthen his odds.

One thing is for sure: Anderson will be tough to break. The South African is serving masterfully this week and that’s always a great advantage at Wimbledon.

With that in mind, 888.com’s evens for there to be over 1.5 tiebreaks in the match is well worth considering.