It is time for the 2021 clay-court Grand Slam, the French Open, with the tournament getting underway a week later than initially anticipated. Here is all the information you need ahead of Roland Garros.

This year’s French Open main draw was initially scheduled to run from May 23 until June 6, but the tournament was pushed back by one week due to the coronavirus pandemic and will now start on May 30 with the women’s final scheduled for June 12 and the men’s final taking place on June 13.

Due to Covid-19, only 1,000 spectators will be allowed on the three main courts during the first 10 days at Roland Garros with the number to be increased to 65% from the quarter-finals onwards, “but it will be capped at 5,000 people on Philippe Chatrier and Suzanne Lenglen”.

This year’s tournament will once again consist of singles, doubles, mixed doubles, juniors and wheelchair events.

What’s new at this year’s tournament?

Court Philippe Chatrier’s new retractable roof was introduced in 2020 and this year Roland Garros introduced flood lighting on all courts, which means play can continue after sunset.

And that is not the only big plus as Chatrier will also host night sessions from May 31 until June 9 with play getting underway at 9pm local time.

However, there is a catch as nine of the 10 night sessions on Chatrier will be played without spectators.

The order of play for each day is usually released the night before, but play gets underway at 11:00 local time (10:00 BST) on all courts except Court Philippe Chatrier where play starts at noon.

What about the draw for this year’s event?

The draw took place on Thursday May 27 and the men’s draw is quite spicy with Novak Djokovic, Rafael Nadal and Roger Federer all in the top half while the bottom half is Next Gen heavy.

It means Djokovic and Federer are projected to meet in the quarter-finals with Nadal set to take on Andrey Rublev in the last eight and the winners of those two matches will meet in the semi-finals.

In the bottom half, Serena Williams, Petra Kvitova, Aryna Sabalenka, Bianca Andreescu and Naomi Osaka are the leading names.

Rafael Nadal will be gunning for a record-extending 14th French Open trophy while he will also be hoping to move ahead of Roger Federer in terms of most Grand Slams won as a successful defence of his Coupe des Mousquetaires will take him to 21 majors.

Iga Swiatek was equally impressive at Roland Garros in 2020 as the unseeded teenager won her maiden Grand Slam without dropping a set during the tournament, beating Australian Open champion Sofia Kenin 6–4, 6–1 in the final.

Who else will miss this year’s tournament?

On the men’s side, former champion Stan Wawrinka leads the list of absentees as he is still not fit after undergoing foot surgery. Denis Shapovalov, Nick Kyrgios and Kyle Edmund will also miss the clay-court major.

Andy Murray opted against taking part in qualifying in order to focus on the grass-court season.

The 2018 women’s winner Simona Halep is the biggest name missing in the women’s draw after she picked up a calf injury during the Italian Open.

ITV4 once has exclusive free to air coverage of Roland Garros in the UK while you can also watch on Eurosport via TV, the app or live stream. A once-off monthly Eurosport Player pass will set you back for £6.99 while a 12-month subscription will work out to £4.99 per month.

In the US, NBC and the Tennis Channel will provide the coverage.

Unsurprisingly, Rafael Nadal is the clear favourite with 5/6 the best you will get at most bookmakers, including Sky Bet, William Hill, Bet365 and Betfair.

You can get Djokovic at a handy 9/2 while Stefanos Tsitsipas is 5/1 at some places after an excellent clay-court season to date with Dominic Thiem at 11/1 and Alexander Zverev a juicy 12/1.

If you want to throw away money, then second seed Daniil Medvedev, who has never won a match at Roland Garros, is your player to back at 50/1.

Perhaps a few bucks on “Name The Finalists” is your preference and a Nadal-Tsitsipas final is 3/1 at Bet365 while Nadal-Zverev is 13/2. A Djokovic-Thiem final is 18/1. 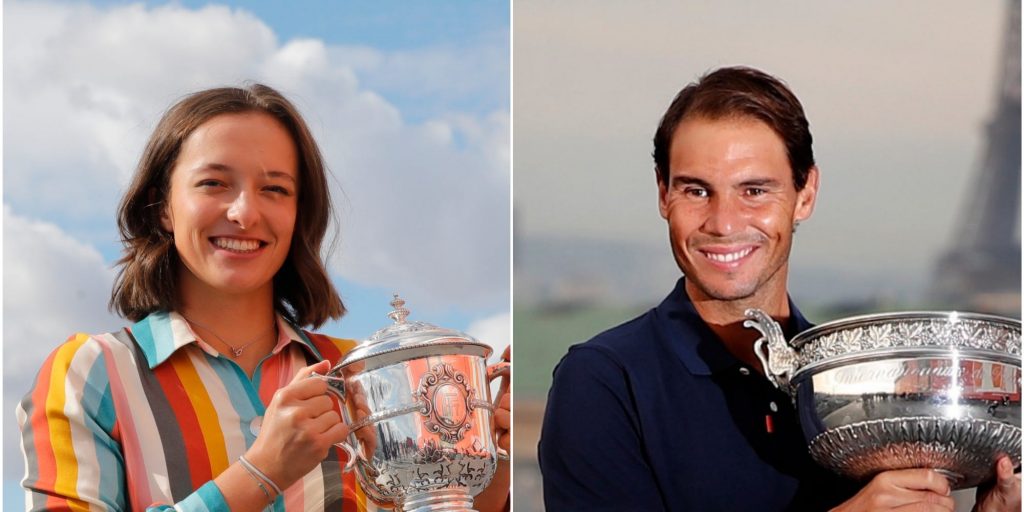 Iga Swiatek is favourite to make it back-to-back French Opens with the Pole is 3/1 to lift the trophy again come June 12 with 2019 winner Ashleigh Barty 5/1.

You can never write Serena Williams off at a Grand Slam and she is a handy 22/1, but Roland Garros is known to throw up first-time major winners and Aryna Sabalenka is 8/1 at some bookies.